@Anonymous  👍. I bet o2 was in the process of deactivating connections remotely on the masts to 3 and. 4G.

possible done this remotely but had to wait for something to come on line.

@Anonymous  👍. I bet o2 was in the process of deactivating connections remotely on the masts to 3 and. 4G.

possible done this remotely but had to wait for something to come on line.

Why does that seem the most plausible reason & something I actually believe to have happened?

Slight digression but if some of you remember the outage in 2012 (search: o2 outage 2012), you'll find some interesting reading about the outcome regarding compensation.

In particular, this one about brand image is quite short but interesting to read: https://yougov.co.uk/topics/consumer/articles-reports/2012/07/16/how-o2-outage-hit-brand

I missed this post earlier.. does that mean it was Ericsson responsible back then too?

@Anonymous Yes I can’t think of anything else.

i know all the networks can remotely control masts and even some of the masts now for moving the antennas about for when there is more of a demand from one mast to the other for example.

First thing o2 will have done is get the software working to control the masts and how you connect to them.

look at when you go abroad, even though the network may have 4G, the network will only allow you to access 2 and 3G. It’s all clever stuff.

Today i I could see 3 and 4G, but the phone when trying to connect refused and stayed happy on 2G. Which is why some people could still make calls and sms.  They may have been connected to 2G

I know that when you roam over seas,  for example your phone will always try to connect to the first signal it sees and then asks the foreign network is a o2 customer allow to connect. If there is a tick in the box, then the phone commects.

Howevee this is where the fun happens.  Say the phone sees the 4G network first, when the phone tries to connect and the foreign network says no because of o2 wishes, the phone thinks that networks is then banned for both 3G and 2G.  So phone doesn’t try again on that network and looks for an alternate. If the phone can’t connect to any network, it just keeps trying and askin each foreign network it never gives up.

It may be when you then get to the countryside where only 2G and 3G may exsist that all of a sudden the phone connects.

Also each sim are coded with preferred roaming networks. So even though you say connect to one, the phone and sim never stop looking and even talking to the preferred networks in the back ground. Which is why you see the phone move from network to network or stay connected to only one network overseas.

same thing happenes in the uk.  Even though you have a o2 sim, for emergency calls your sim regardless of network can and will connect to any available network. It’s a legal requirement in EU.

the issue today was that the sim can see the o2 networks just it wasn’t aloud to connect, its was being refused. so if there was 4G signal and the sim couldn’t connect, it doesn’t always assume it can connect to 3G and 2G as well, which then shows no signal. So the phone then just keeps looking and hoping it can connect.

Its called a handshake, but today the sim was holding its hand out, but o2 didn’t hold its hand out to shake back 😳

if you see tweets from three and o2, they always tell customers to switch of 4G when roaming and connecting to a foreign network if you have problems. again this is why o2 say can you try connecting to a 3G or 2G band and switching off 4G.

the demand on 3G will be immense and cause the cells to then stop breathing, which will the cause data to stop again. Only one good thing is that is late now so the demand won’t be as huge as say 4PM

The will be another spike at around 2am when IOT device polling kicks in and then again at start of service for public services..

So will see what happens...
Current Phone: Motorola Razr 5g
I also have a Planet Computers Gemini

Glad I had to get away from here earlier, as life had to come first...

Just worked out how much a days credit for my father who is on could get on tesco mobile, and it worked at £0.05p.

I have just read through the posts i missed, and people need to get a grip and understand that they could only get at most £0.45 in credit, and they have to prove they had losses, and provide reciepts etc....

Also it will be interesting to see how many people come back, saying i cancelled my dd in anger and now have no service and o2 want £15 to reconnect.. or mr debt collector has sent me a letter..

@madasaf1sh I would agree. People should not be cancelling dd. Worst thing they can do.

@Anonymoussome info from a great person on Twitter who is a top guy and very clever.

but it matches mainly to what I said. And I didn’t see it first lol 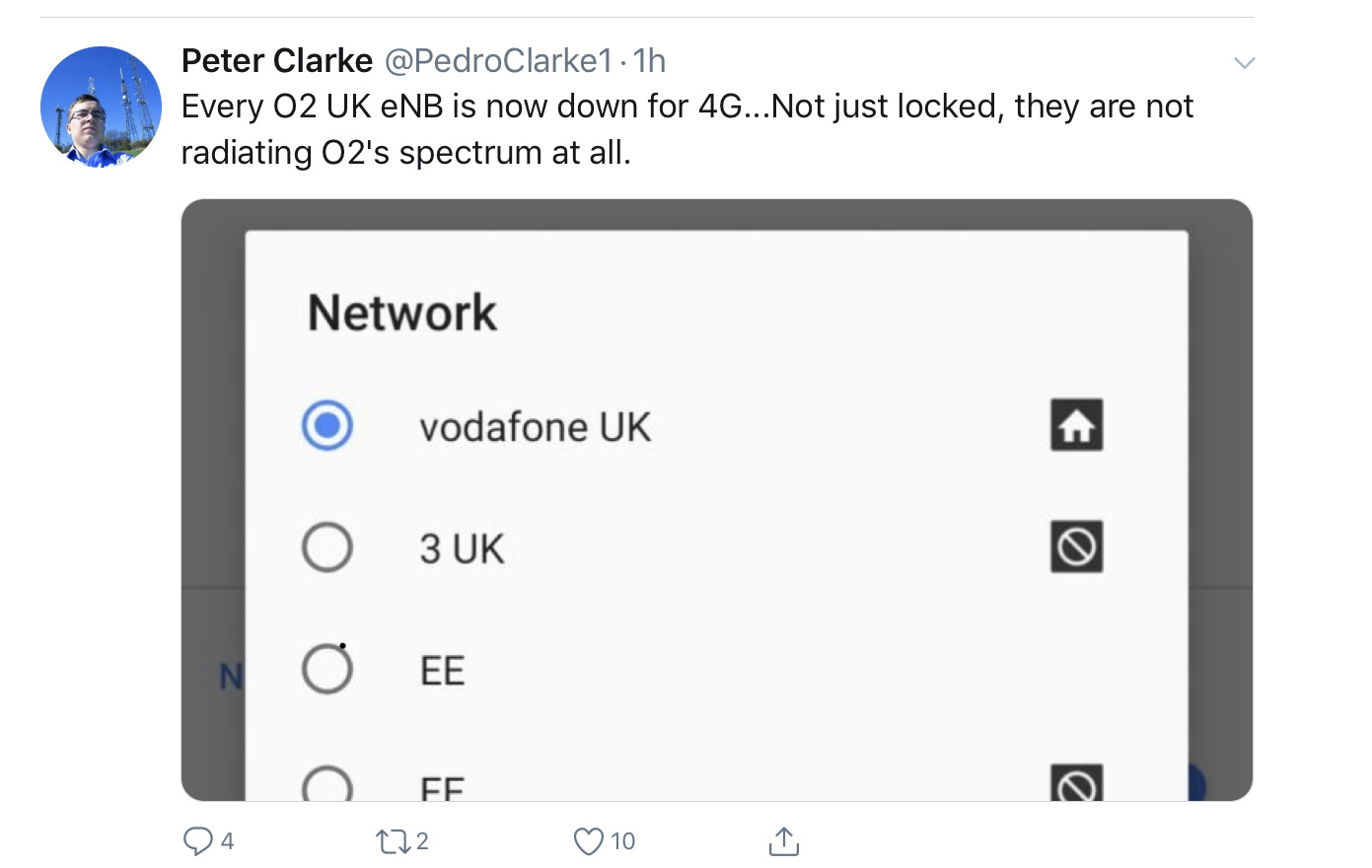 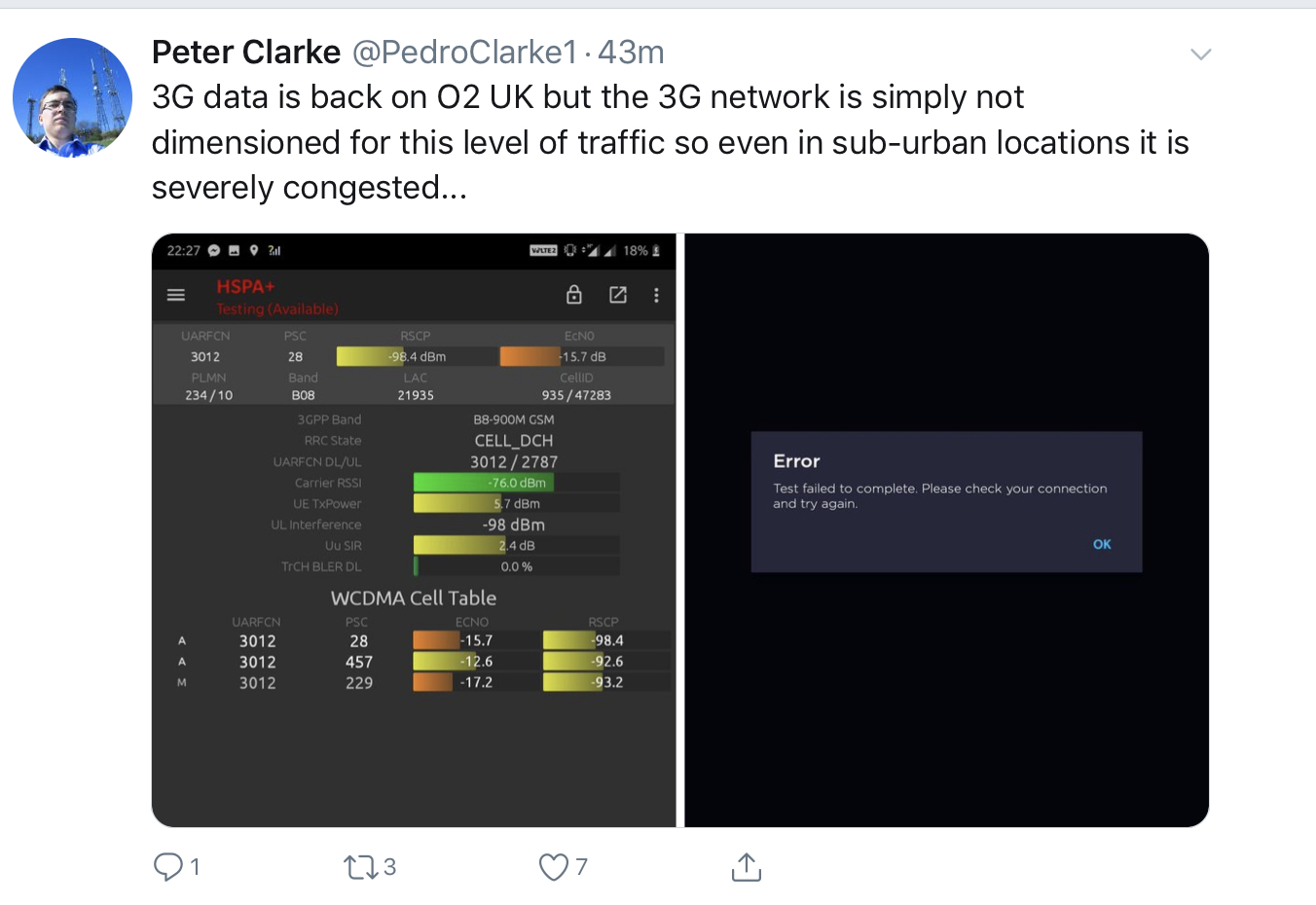 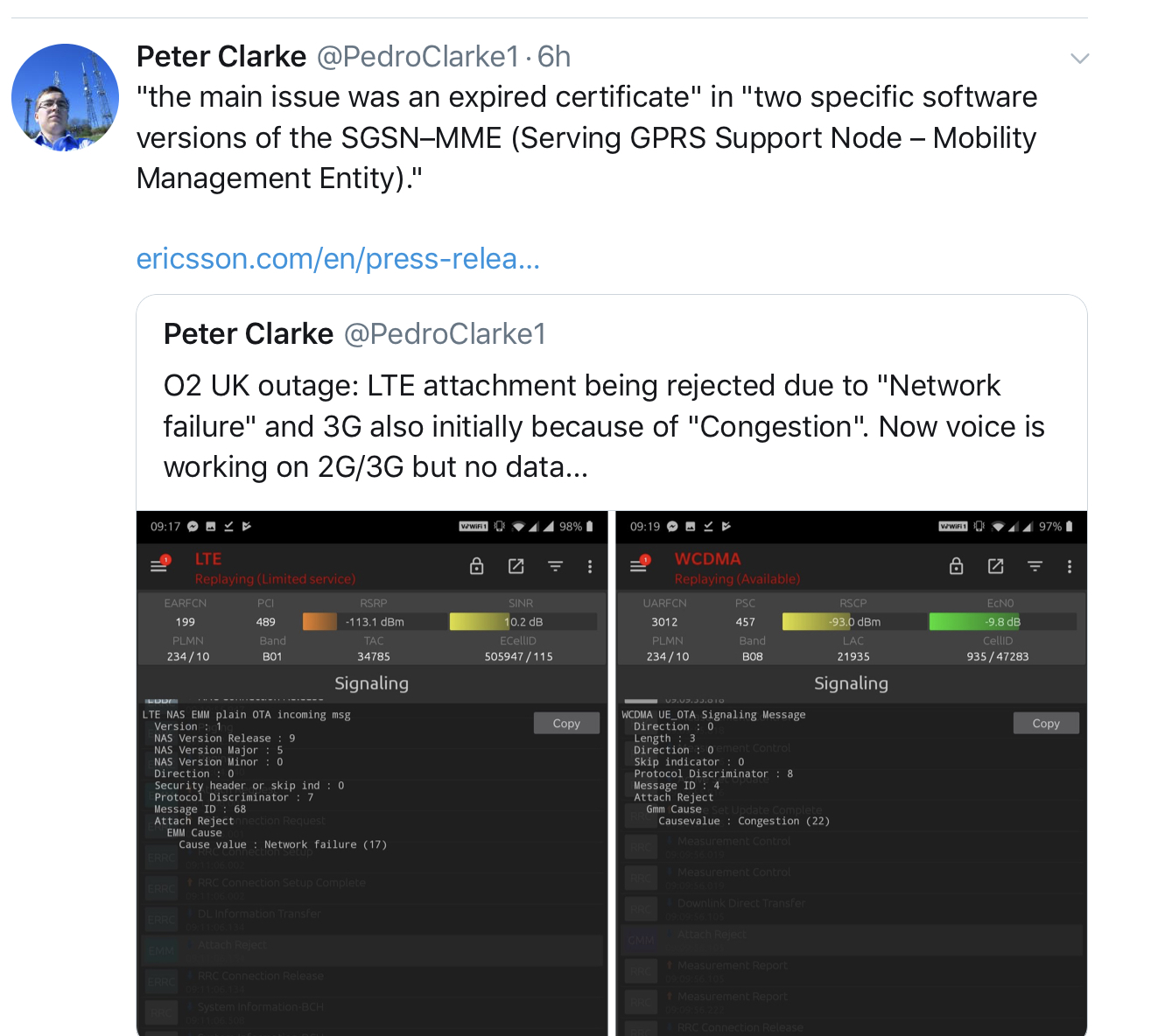 Its going to take some time tonight to bring the backhauls back on line, and probably a cycle of the switching infrastructure at each cell site to be able to offer 4G fully...
Current Phone: Motorola Razr 5g
I also have a Planet Computers Gemini