i've had an issue with O2 lately; namely, bills being paid, but i still receive notifications of unpaid bills. At first, i thought they were spam mails so i ignored them. Until my line got cut off. so i called client service to ask what was going on.

now to fully understand the situation, you need the background story.

I've been a client of O2 for almost as long as i moved to the UK from France. As i have a revolut account, it was really easy, no issues at all. i had to move back to France due to Covid, but i kept my number because i planned on going back. i used to pay first with direct debit, but then my revolut account started having some issues, so i switched to paying with my credit card. One day, that stopped working for no reason. I contacted my bank everything was fine. I contacted O2, payment should've worked.

Anyway, i changed my revolut card to my French bank credit card. After a few months, THAT stopped working as well. So i called my bank to know if there was some kind of issue with my card. There was none. So i called O2 again, to know why my payment methods just keep tapping out like that .They couldn't give an answer. so i asked them for they international bank information, so i could start paying via transfer from my french account to their UK account. That was in October 2021, and it worked right up until February2022, i believe.

so one day, i receive my bill, and make the payment as usual. i like to pay my bills in advance, so it's out of the way. but on the 28th of that month, i receive an email saying my bill is due. that's weird. i distinctly remember paying it a few days ago. and my bank reccords can attest to that. so i put it out my mind. Until my line gets cut. what? i have no way of contacting them. I try sending an email with the proof of payment. i receive an answer two days later saying they don't use email service anymore, and to please call them. But wait, I cant! my line is cut!

But then i remember that i have a french phone. so i make the call from there (my bill that month was through the roof by the way), and spend almost an hour on the phone with them (most of that time on hold). finally, my phone is online again. I anxiously wait for an answer from them saying the issue is resolved. That never comes. things continue in the same fashion until today when i'm writing this note.

at the beginning of the month (june) i finally resolved my issue with my revolut account, so i immediatly switched back to paying from there, since it's easier; it has UK bank information, and that's what what's originally in my contract. to my utter suprise, my line remains cut. and on the forteenth, i receive the usual email saying my bill is ready. but now, i have to pay the same bill twice. Since my line is still off, i reach out through Chat. that's when i learn that they need a GED so they can track the payment. what'a a GED, i've never heard of that. so reach out to my bank. they are as confused as me. they don't have GED, but have external reference wich should work to track a payment. so i say to the agent i'm chatting with . But that's not acceptable. They absolutely need the GED and won't accept anything else. i'm process of replying when the conversation is ended.

Meanwhile i've sent everything i cant to Payment to trace. Other than one-sentence answers, i don't receive anything else. They're saying the payment is reflected on my account. I genuinely don't know what that means, so i ask them to clarify. i also send another email saying that if they mean that the money was returned to my bank account, it hasn't, because there has been no movement in such, and i attach proof of my claims.

fast forward to yesterday  june 28th. the bill is due and i refuse to pay the same bill twice. So i send another email to payment to trace as it's now my only way to contact O2, as the chat service is no longer available. at least it's not when i try to use it.

the last agent i talked to said they'd pass my issue on to a manager, but so far, no news.

my question today in how can i resolve this issue. And afterwards, do i need to press charges? also how do I terminate my contract, because i'm so done with this.

Bank account references for O2 direct debits are recorded under a reference starting GED then a series of numbers, if that helps, @claude - in the mean time, I will tag a forum O2 Advisor, @O2Sarah-, in to this to help you out as appropriate - keep an eye out for her message later. Meantime, collect your bank and any other payment records so you have them to hand when asked via Prevate Message in here for more info, including O2 account number(s). Good luck!

For info, as I pay using card details stored in my MyO2 Wallet, all my references are "CAMYO2W" 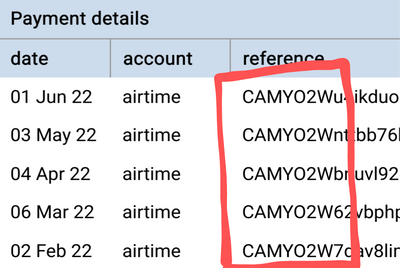 Visible under Payment History in View and Download Bills section of your MyO2 account - Guide: How do I get to the 'Download Bill' page?  I have not cross-checked how that appears on my Credit Card Statement, TBH 🤔

Thanks for the tag @pgn

@claude Sorry to hear you have been having so much trouble , I will private message you to look into this

Thank you, @O2Sarah- - I hope your issues are soon behind you @claude 🤞