I have been charged twice for a text message but the correction promised by an O2 agent in an on-line chat has not come about. I wonder if anyone else has been hit with duplicate charges.

On 28th November 2017 I made just a single SMS in the UK to a UK O2 number. That appeared in my bill for the period as a charge of 0p, part of my allowances for the period to 2nd December. In early December, reviewing the current position on "My O2", I saw that I had a charge of 13p for a text message made at exactly the same date and time. It was marked as a "Late Landing Charge". When I queried this with O2 Customer Services, I was told it was related to TU Go and was always chargeable!

To me this looks like some sort of system problem and others could be affected.

On 18th December, the O2 on-line chat agent promised 2 things: a correction of the charge and an email copying the chat for my records. Now 7 working days on, neither has materialised and I suspect I may have to escalate this to a formal complaint. Fortunately I managed to copy the chat conversation from my browser.

The 13p charge is not a large amount but I am sure O2 would not let me underpay a bill!

Adjustments to bills are usually made when the bill is produced and don't show in your MyO2 until that time.
As it's only 13p I would wait until my next bill was generated before escalating it.

The advice you were given about it being TuGo related was totally false. If you wish to make a complaint then follow the advice in this link https://www.o2.co.uk/how-to-complain

Adjustments will show in your bill page as shown here. 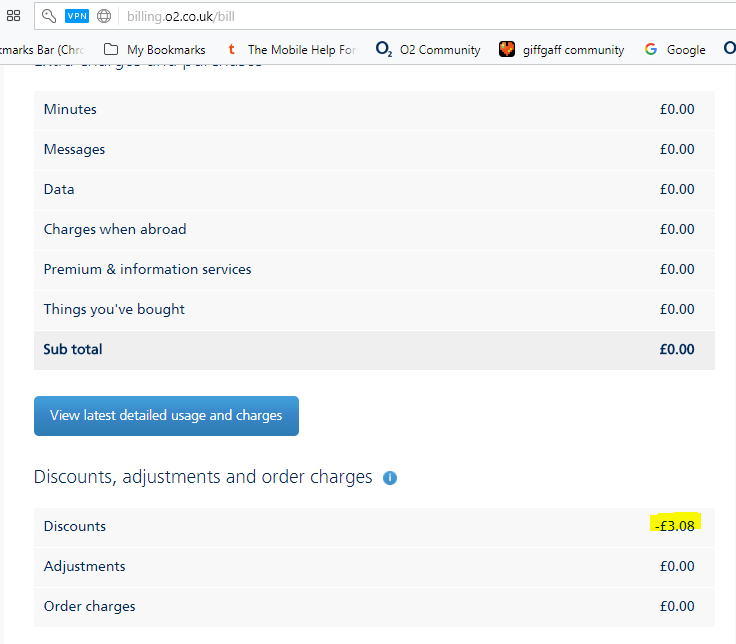 Thanks for the information. I will look out for the adjustment - but will not hold my breath!

I am somewhat riled that I have not received the copy of the chat that the agent promised would be sent to me within 24 hours. That's what makes me think that the promise of an adjustment will not be kept either.

At the time I thought the TU Go claim was the proverbial soil-enhancer but was too polite to comment in the chat which, by the way, took 26 minutes.

When in the chat window, there should be an option at the top to email a copy of the chat to yourself, or just take screenshots in future.
I have no affiliation whatsoever with O2 or any subsidiary companies. Comments posted are entirely of my own opinion. This is not Customer Service so we are unable to help with account specific issues.

Well, like the OP I'm doubting very much this adjustment has been made. Any credit to your account will show as soon as it's made, adjustment or rewards. You have to go the long way round to see it ie the viewing of older bills. It's under recent charges.

Any adjustments to my account I can see well before my bill is produced. I've had plenty of credits from incorrect charges.

The bill for December has arrived - and no adjustment, as suspected.

Whilst this is a small amount of money (15p with the VAT), there are points of principle that bills should not be overstated and that promises to make corrections should be followed through.

Fortunately I am retired and can afford to spend some time on this. O2's customer service standards will get an airing with my friends and others and I will be considering changing supplier when the contract expires.

We are sorry to hear about your bad experience. Did you get it fixed at the end?

I'll drop you a Private Message to get more info just in case there's something we can do to help out.

Thanks @jonsie, @Cleoriff and @MI5 for your help

Get involved! If a post answers your question, please mark it as an "Accepted Solution”.If you are new to the community, please read How to use the community
Report Content
Message 9 of 21 (1,136 Views)
Reply
0 Kudos
AndyinSuffolk
Level 2: Apprentice

Certainly to me the duplication of the charge looked like a processing error (e.g. file of transactions processed twice) and could have affected a lot of customers.
I await with interest the results of the investigation of "the technical error"!