Having just received the Z30 as part of the 'try the tech' scheme I thought great, just connect both up to Blackbery Link and perform a device switch.

This post was going to be a complete walkthrough.

Things were destined to not go smoothly though 😞

There was a notification of a software update to 10.2.1.2977 so I tried to connect to my Wifi at home. No Joy. I Double checked the router settings but it would not connect. On checking the phone I saw there was a call logged there and also some other data left on there. Whether this was from a previous loan or due to the packaging of the device being damaged revealing the contents I'll never know. Suspecting there may be some policy preventing me connecting I did a secure wipe of the phone which on a Blackberry is not just a simple reset but takes about half an hour to complete. After the wipe had completed I was then able to connect to WiFi and complete the software update.

The next step is to connect the Z30 to the PC via USB and let it be detected by Blackberry Link. I selected device switch 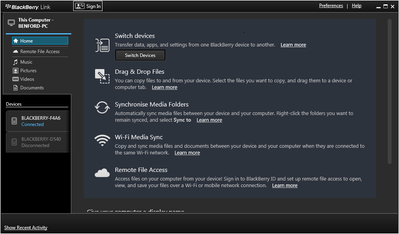 and waited till the Z30 image was visible then clicked on it. 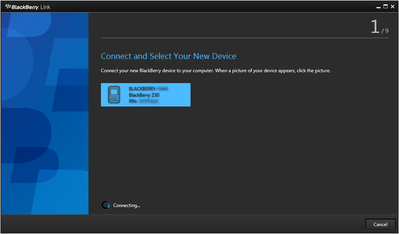 There was then an option to either use another device or a backup file.

I selected use another device and connected my Z10 using the USB cable.

I selected it as the source device

On thenext screen I opted to transfer all data.

On pressing next the program started copying all data from the Z10 to be transferred.

This takes some time depending on how much data is on the phone of course.

Once complete it prompts to setup Gmail accounts on the new device before continuing. This uses 2 step verification if you have it turned on in Gmail instead of the app specific passwords that were previously necessary.

Once the new device is connected then the transfer starts and takes similar amount of time, if not a little longer than the backup from the source device. As this seems to where I ran into problems I have no more screenshots.

At or near the end of the process I ended up with an error, but on disconnecting the phone all seemed to have been transferred apart from 2 programs, one of which was Snap which has to be sideloaded anyway.

It is necessary to re-enter password for email at this point, including Gmail which begs the question why it needs setting up beforehand. As it was already late I did not test any apps at this point.

After normal use the following day I sideloaded Snap and as there were updates for some of the Android apps, I downloaded the updates but was presented with the swirling circle (the equivalent of the hourglass) until I exited the installer. I reset the Z30 and tried again with the same result.

I then tried running an Android ported app installed from Blackberry World and that just gave a blue progress bar along the bottom which promptly closed when completed.

OK, back to drawing board. Suspecting some incompatibility between the Z10 and Z30 systems i decided it was time to wipe the device, reload  software via BB Link and set the phone up from scratch, after which, touch wood, all has been working OK.

Now to assess it for the review

Certainly not the smooth process I was anticipating

Sorry to hear this wasn't seamless Aldaweb, but thanks for detailed walk-through. Could we even class this as a guide?!

Eager to hear your thoughts now that you're sorted

Could we even class this as a guide?!

Eager to hear your thoughts now that you're sorted

@TobyIf you think this qualifies as a guide then by all means go ahead.

Anonymous
Not applicable
In response to aldaweb

yeah, I probably wouldn't include the Android apps as part of the device switch, but having never installed Blackberry Link I don;t know if you can still select which apps you want installed on the new phone like you could in Blackberry World.

In fact the number of horror stories I've read on CrackBerry about device switching I probably wouldn't use Link anyway and just setup from scratch haha!

But hey, at least you got there!

Let us know how you get on with it!

@Anonymous  there wasn't an option to select individual items for transferring from one device to the other, though there may be if it's done through a backup file instead of direct, similar to the restore options to the same device.

To be honest I didn't expect them to be transferred unless they were from Blackberry World, but even those wouldn't load. I assume the runtimes are slightly different and the switch had restored the Z10 runtime.

A lot of things have changed from when I first did the switch from my 9700 (via Blackberry Protect)I'm reserving judgement  and then from my initial Z10 to my present one, but that was just a backup and restore.

I'm reserving comment for when I've had more time with the Z30.