I read that they had to lay a new floor for Carlos's dance. Apparently it went down over the original and was then removed.

We all know this is filmed on the Saturday and they pretend the results show is 'live' on Sunday.

It just makes me wonder what was the exact sequence of events with this floor being laid.

Does Kelvin have the biggest mouth & weirdest smile? He looks like he’s trying to swallow everything when he’s dancing??
Report Content
Message 232 of 252 (1,382 Views)
Reply

Kelvin and Oti to lift The Glitterball Trophy ... unless some BBC conspiracy voting has Anton to win

Anton should replace The Wooden Tess Daly ... at least he looks good in a suit

My votes are going to Kelvin but unfortunately I'm out during the live show again so won't be live blogging this year. Might need to excuse myself to vote at a certain time though

Apparently Anton has found himself a new job on This Morning with a segment "Anton's Angels". But yes, getting rid of Tess might be a good thing for the show. Would we notice if a cardboard cut-out covered in bacofoil appeared as her replacement? Oh wait a minute, she might be one of the Pod People

Ah, now I think I might has discovered what song Taylor Swift might be doing. Its either the surprisingly dull Andrew Lloyd Webber collabration "Beautiful Ghosts" from the forthcoming horror movie she's in - Cats (you'll know why if you've seen the trailers) or the rather sappy Christmas tune and oddly more memorable song just released called, er Christmas Tree Farm. I suspect the former as, well, its been like that all series so why should I be surprised.

Was looking for choice of music , though it is probably a bit early. This is the only thing showing on a BBC Strictly website.

Tess Daly and Claudia Winkleman host the Grand Final of Strictly Come Dancing 2019. Back in September, 15 Strictly stars began the competition, and now we are down to the final three. Tonight, those three couples will dance three times in a bid to lift the famous Glitterball Trophy.

First, the judges pick the dances from earlier in the series that they think each couple can improve upon. Next, the couples perform their showdances – no rules, any style. This is their chance to showcase their creativity and dancing skills. Finally, each couple will dance their favourite routine from the series.

The people with the paddles - Bruno, Motsi, Craig and Shirley - critique each performance, but it will be up to the viewers alone to vote for their favourite.

With a guest performance by pop superstar Taylor Swift.

SOME of the dances and music 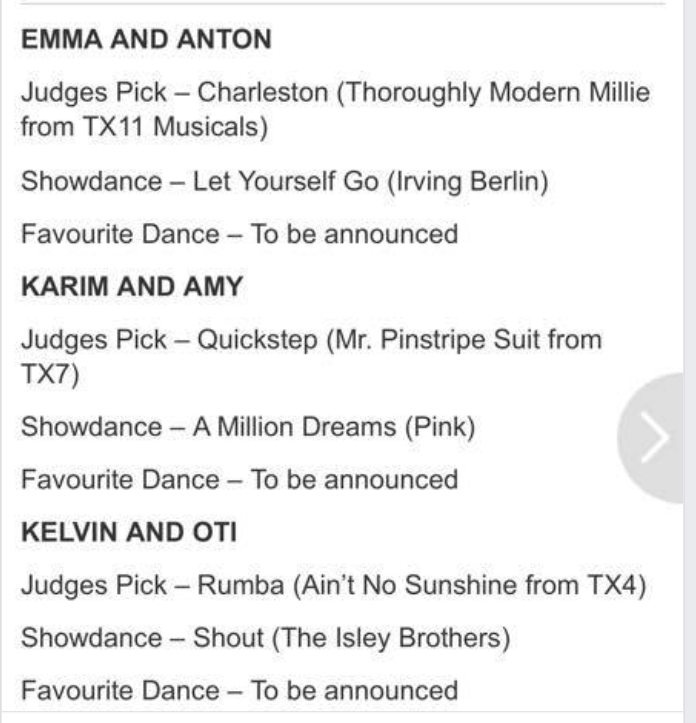 TX is the week they performed it. How 'convenient' that Anton and Emma are dancing one they did a couple of weeks ago. ...FIX!!!