A few days early, but wishing all the dads a Happy Father's Day ❤️.

I'm feeling very lucky, as at the beginning of last year my father was very ill with COVID-19. It was very touch-and-go at the time, but fortunately, the doctors, nurses and everyone else involved could help him. We were able to celebrate his 60th birthday at the end of last year, and can now celebrate Father's Day.

He came up from Wales earlier this week so that was nice, and I've sent him some things in the post for the actual day. Usually, as he was a carer, I would get him an album on CD, so he had something new to listen to on his rounds 😅. A silver lining of his recovery though was that he discovered reading! So, I've sent him a book along with his card, and not a CD.

So, with that being said, it would be amazing to read an anecdote or two from community members about their own fathers or father figures. What are/were they like? What would you do/get for Father's Day?

And finally, wishing the fathers of the community a happy day too! Hope everyone has a good one celebrating this weekend 👨.

Top Gun Maverick at the cinema (good film!) and a shot on the big Space Invaders game with S#2 after...

Next a Chinese for dinner and a Birra Moretti (gift from S#1) along with... 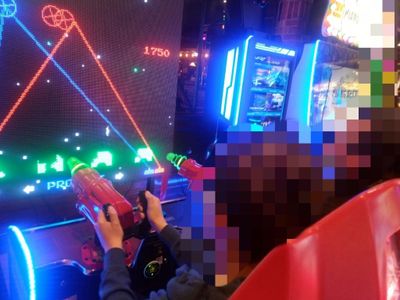 Epic to hear, both @J9el @pgn! Are you type of dad to let the boys win or do they beat you anyway, pgn? And, Do we turn this thread into a competitive what's the perfect Chinese order 😂?

Managed to have ~30 minute phone calls with both my father and stepfather. Both were happy with their cards and gifts, almost sent the latter a Liverpool card (he's a Man United fan) so glad I made the right decision 😅.