i have been experiencing this issues for months now I recently went to apple and they insisted my phone was restored again as they believed it would correct the issue despite me restoring it on the 16th april. however my problem still exists.

My phone has not had any apps, music etc put on the phone since it was restored on Tuesday i have left it like it was given to me to see if there was an app i was putting on the phone causing this issue well it wasnt and now only the apps that apple install before you buy the phone are on it.

My 3G, Wifi, Location Services, Notifications, are all turned off to ensure my battery lasts as long as possible

All apps are closed completely after use

Please see the attached picture to explain my issue I charged it again last night and the same issue is happening again despite me barely using my phone. 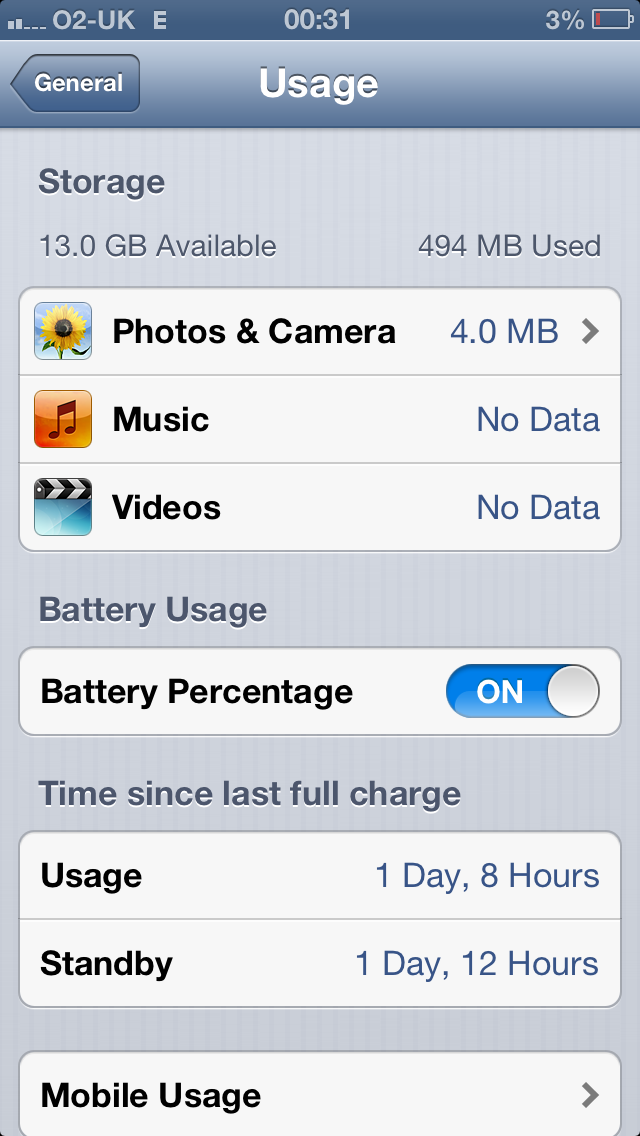 By turning off features like 3g and wifi you could decrease battery life, as the software will periodically check if it has connectivity yet.

It looks normal to me, esp considering you are in a poor signal area. The phone will be constantly searching for the network. If you turn off 3G you may see some improvement.
I have no affiliation whatsoever with O2 or any subsidiary companies. Comments posted are entirely of my own opinion. This is not Customer Service so we are unable to help with account specific issues.

Sorry to hear your having issues.

MI5 the OP has turned off  3g to save battery which is why he's probably showing edge coverage.

Make sure you have turned off diagnostic and usage settings in general,about.

Its at the bottom.

I generally get a days usage out of my iphone 5 and everything is turned on.

Most of the time a restore as a new device works but not always.

Bad batterys do exist so if your still not getting what you see as reasonable then make another appointment at the apple genius bar and push a little bit harder for a replacement.

Take screen shots like you have been doing to support your claims.

i only use my 3g when needed so its turned off mostly.

my phone has been fine up until the last month or so and then this started happening despite numerous restores as a new phone i never use backups and nothing has fixed the issue.  the phone thinks its being used when its not.

I really wish people would read properly as i did state in my first post that the most battery draining features are off like 3G, Location Services, Brightness is only half, auto brightness is off, icloud etc...

I have no apps or music on my phone at present as i wanted to see if it was a faulty app i was using but turns out that its not and its something to do with the phone itself.

My usage before this used to be no more than 6 hours but now its claiming i have used my phone for a full 24 hours so ive had no sleep then... I dont see how this is classed as normal to anyone

Funny I don't see iCloud mentioned:/
Nothing sucks more than that moment during an argument when you realize you’re wrong. So Ive been told

Have you done a restore & set up as a new phone. You should just be able to walk out with a new phone
Report Content
Message 7 of 11 (7,930 Views)
Reply
0 Kudos
Anonymous

There's something a miss with the usage and standby been nearly the same.

I made some video guides showing various ways to maximise battery life. Perhaps there is some setting that you have switched on that is causing your issue.

What I would suggest you try is go into Settings/Privacy/Location Services, scroll down to the bottom and touch System Services. In here scroll a little bit further down and switch on Status Bar Icon. This setting will show a little symbol if there is some app or setting using GPS. See my below screen shot. 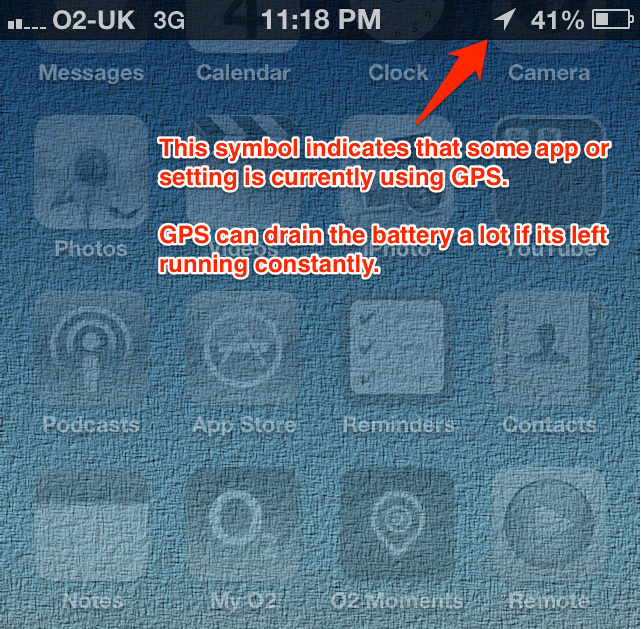 Also while in the Settings/Privacy/Location Services/System Services, switch off all of the seven.

If this doesn't help then perhaps something in the video guides might help.

well went back to Apple on Sat and turns out my phone was indeed faulty he reckons the motherboard thinks its being used all the time even when its not, i was given a replacement and everything is back to normal i charged the phone to 100% and its on 24%

Glad to hear you're sorted. Shame it wasnt a one stop fix.