So I thought I would do a new Review on the new O2 travel when I went  to Belgium, France and Netherlands last week.

When I first saw that O2 had removed the 15mb allowance for Europe, I was really excited and thought I’m now able to use my phone much better over in the EU.

However I have to be honest and say I was extremely disappointed to say the least. Infact I was shocked how badly O2 have got it.

So I will explain. £1.99 for unlimited Data (I’m on contract) per day is great value for money. I understand that after 100mb further restrictions apply and that speed restrictions are in place when you are in the EU from the word dot. However this is where the problem lies, the restrictions are that bad and I really dread to think what it’s like when you hit 100mb of Data, because I couldn’t get near it. Not even after Hours and Hours of use.

These are the speeds I was getting, No mater what time of day or Network on. I know the networks shown were just in Belgium, However I can tell you that in France it was the same and the Netherlands failed to work at all it was that bad. 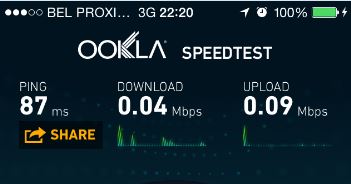 Send or Receive Pictures over iMessage would take 10-15 Mins.

Using Twitter, would take 10-20 seconds per image to view, and just refused to load some altogether.

Apple Maps would load, However Google Maps couldn’t keep up with Data and just timed out, or showed blank screen with a Moving Dot.

Face Time, did work for a couple of seconds, but on many occasions wouldn’t even connect, Face Time audio did connect once, and then failed.

Using the internet to browse was painfully slow, or just didn’t work at all. Searching on Google would take average 5-15 seconds to load a search page.

Sending normal MMS and being charged 40p (Like lightning)

1st day I managed 63.08Mb, however this is with charging my iPhone up twice and using it most of the day

2nd day I managed 68.11Mb. All Day usage. Again had to charge iPhone up at the end

3rd day I managed 69.88 Mb. Again All Day usage and iPhone had to be charged.

I was in Europe for longer than 3 days, but after the 3rd day, I couldn’t cope with it anymore, so I put my EE PAYG sim in and paid £5 per 100mb per day. Cost me more but the speeds were normal 3G speeds and in France I got 4G Speeds. I also never had to charge the phone once during the day as everything worked great.

So this was the average speeds I got with my EE PAYG sim in Belgium, France was much faster at 20Mb + on 4G 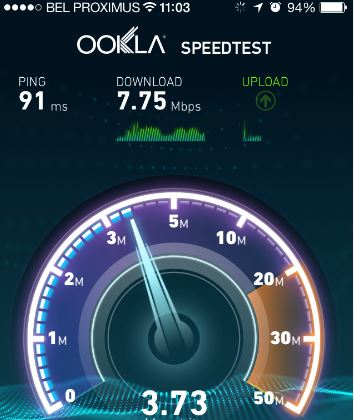 So O2 lost out because of their ridicules speed restraints. whoever decided the speed restrications needs to spend time in EU and use them like I did. I totally understand restricting it after 100Mb, or even restricting it to 1Mbps download for first 100Mbs, but please, let me get there in the first place. I can’t fault O2 for O2 travel, it’s just a shame it’s that restricted it’s not useable any more.

I wonder if this what the EU had in mind? Looks great on Paper, just in real life is useless!

I know people will be saying, well you used 60+ Mb each day, Yes I dont disagree with that, but this is from 8am to 11pm of use on 2 days and on 1 day it was even later. I dont mind paying for any Service, But please please let me able to use it for a little before you put restrictions in place.

That's shocking to be honest and such a shame. I've had no experience using O2 Travel as it's a rarity for me to travel to Europe but given that information I doubt I would even bother using it.I would end up just not bothering and stick to wifi or a local sim.

To get those speeds in three different countries highlights the restriction on data, as you say it should be slowed after 100mb.

Interesting stats and thanks for posting your findings.

Yes was a disapointment Jonsie I have to admit.

I always like to take Pics and send them back to my Family or friends like you do, but this is the first time ever Ive switched to another Sim card, I even found a Mobile shop and asked them how much for a Local sim, incase I ran out of Monies on my EE PAYG sim.

I was lucky as my Hotel had free Wifi so was able to use it when I was back, but as I was on Coach trips, it wasnt until late evening when I was back.

O2 to me have made a complete mockery of O2 travel and Im sure this is not what EU wanted when roaming.

This made fascinating reading Darren and I can only put my 5 pennorth in here.

I travel to Spain a lot and yes I use Wifi where possible so maybe I am not trying for the same usage as yourself.....

However in July I took my daughter in law with me to Spain, she is also on O2. She used her phone a lot

more than me...not always with WiFi and had no complaints at all. She spent a lot of time on FB and sending pictures to her family back home. She didn't test her speeds as you have done...but there again she never complained that pages wouldnt load or were slow

The network we use in Spain is Movistar...which as you know is owned by Telefonica.....

I just wonder  whether O2 have got it right with Spain...... and other areas such as those you visited are the 'poor relations'?....

Do you know Cleoriff, I think that could be possible, which makes it even worse. If O2 are doing this then it's should say. Using O2 travel in Spain is fine, using it every where else will be slower than slow.
😳

This year it's been appalling with the restrictions. I love the phrase " Poor Relation"

I would love to know if it's restricted in other European countries when using O2 Travel?

Thank you for your insight on how your experience went.

Those experiences remind me of the days of dial up !

One of the usual bits of advice I give when a person is going abroad is to ensure the phone is unlocked ,and use a local sim card which is a viable alternative as long as one does some planning ahead to know what that particular network charges etc.
Message 6 of 53
10,324 Views
0 Kudos
Share
Reply

I think in fairness to @darrengf  he did do his research before he travelled extensively....

His problem was more to do with O2 travel not meeting his expectations whilst in those countries....

Who would be aware that there would be such a difference in experience between mine in Spain and his in France and Belgium etc...

I do know  that until Darren posted last night I would have made a presumption that O2 travel data would  be just as good as I experience when in Spain......

A real eye opener to find it isn't...

Here's some more interesting news, I've used O2 travel on both O2-DE and O2-CZ networks and not noticed any speed issues at all.
Add that to Cleo's experience on Movistar and we can see a pattern developing here......
I have no affiliation whatsoever with O2 or any subsidiary companies. Comments posted are entirely of my own opinion. This is not Customer Service so we are unable to help with account specific issues.

Thanks for this review Darren! I'll answer your PM asap and I'll also show this post to the team.
Fancy writing a great device review or O2 forum guide? Send me a message!

@MI5 wrote:
Here's some more interesting news, I've used O2 travel on both O2-DE and O2-CZ networks and not noticed any speed issues at all.
Add that to Cleo's experience on Movistar and we can see a pattern developing here......

@MI5Those networks you mentioned.....where are they?  (I presume one is German)...