@L_W_Ward wrote:
I'll hurry up and get my update done asap to get it back on track

Good call...though we have enjoyed getting to know you (and your dog)

Ok so here is my update with Windows Phone 8.1 update 1 installed.

I intended this to go into post number 2 but I can't edit it, could a mod do this? @Toby

So i've had this installed on my 635 since Monday night. The update went well, no one died, cried and more importantly all the features on my phone works. I've decided to break this down into three key areas, battery life, live folders and Cortana. I decided to pick these topics becasue these are the most commonly used and I quess these are the ones which more people would like to know about. If there are any features you would like to know about please ask me.

So here we go: 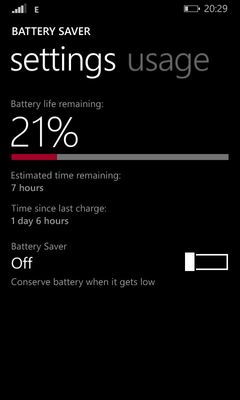 Live Folders: I am not joking when I say this but this is THE BEST implimentation of folders I have ever seen on any device. The word "live" is true to its word. When you create folders you can reorganise the tiles as you would on the start screen and they are live, just like start screen. Also as long as you have the folder tile in medium or large, the view of the folder shuffles the tiles accordingly with the live tiles showing. These are not images of the tiles, these are live tiles and they update in real time if they are on the preview. This is an amazing feature and I tip my hat to microsoft. However do they work on a small screen? not for me. When you have the folder tile in medium or large it takes up to much of the screen and you lose a bit of creativity when using other live tiles. It is worth noting that I have six folders, Networking, Media, Photography, Utilities, Games and Office. Having the tiles small and you lose the live effect. I'm looking forward to getting my 1520 back and playing with this feature with extra screen space.

Here is a link to someone using these videos. https://www.youtube.com/watch?v=wJziJDOC_XI

Cortana: So, so. I've used Siri and Google Now but they became features I never used. Cortana is being used, but it is a Beta and not all the features are turned on. Ideally I want to speak with her like Iron Man does to Jarvis and I expect that to be very possible in the future. Maybe this feature is best to be reviewed when GDR1 is offically released and we can see all the features.

So are you waiting for update 1? are you thinking of buying a Windows Phone?

A great review Liam, and a magnificent Pug puppy

If you want to make any edits, please PM me directly.
Fancy writing a great device review or O2 forum guide? Send me a message!

I enjoyed your review, update & the thread as a whole

I bought a Nokia Lumia 640 lte in Spring this year

& generally a good phone for me as a tech novice