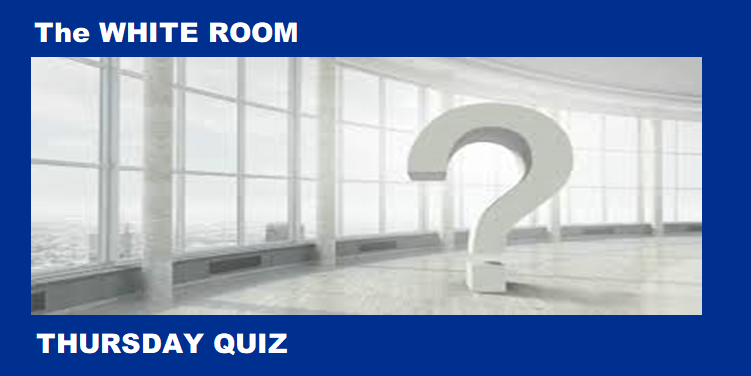 I posted advance notice of this quiz on Monday HERE

The White Room quiz with a difference!

@Mi-Amigo  has been setting these quizzes and testing our brain power since August 2019.

Now it's HIS turn to be in the spotlight and show us what his knowledge is like, without access to reference books, Google, Wiki You Tube.

Q1 (Inventions) Lewis Carroll was a well-known author. He was also an inventor. What was his most famous invention?

Q3 (History) What was the shortest war ever fought?

Q4 (Sport) Up till July 2018, what was the most watched Sporting event in the World?

Q5 (Television) In the USA, who were the first couple to be seen in bed together on TV?

Q6 (Theatre) In the Shakespeare play Romeo and Juliet, how old was Juliet when she died?

Q7 (World Record) What building holds the world record for the most toilets?

Q8 (Culture) In what country is it considered extremely impolite to touch an adults head?

Q10 (Medicine) What is the oldest, most widely used drug in the world?

Q11 (Literature) “Night is generally my time for walking.” This is the opening line to which novel by Charles Dickens?

Q12 (Food and Drink) Which beer famously has a blue 5 pointed star on its label?

Everyone who wishes to take part must PM ME (@Cleoriff ) their answers between the hours of 00.01- 23.00pm THURSDAY 16th January.

@Mi-Amigo will post his answers OPENLY on the thread between 23.15 and 23.59pm the same day THURSDAY 16th January (once all PM'd answers have been sent to me)

Any answers which arrive or are posted after the times stated will be declared null and void.

Also no use of google, wiki, reference books or YouTube for anyone taking part.

Each member will be awarded a

for any correct answer

There will also be an award of the Thinkers

I will post the answers on Friday 17th January

OK Who let @Cleoriff loose with these questions??

Is this the result of too many voddies in Virtual Lounge last night celebrating 7 years on the Community?

At first glance, there are 5/6 questions which I`m fairly confident I know the answers; but that said, there are some which I`ve got no idea and am gonna have to make wild guesses when the time comes... Thankfully I have got time to contemplate and have a good think - and as I promised I will not use any reference book, nor search google, wiki, youtube or internet sites...

Good luck to all those who are joining in...

That doesn`t make it any better... In fact, it makes it worse as the questions were set up in the cold light of day...

I'm off out for an hour so I'm not ignoring questions. Will answer any posted when I get back

I'm sure we can survive for an hour

@MI5 wrote:
I'm sure we can survive for an hour

That sounds like the voice of confidence @MI5 - far more than I have at this stage...

I came back on the hour and saw you were 'managing' without me ....so left you to it

My life is now complete, again