Having watched/listened to F1 since it started (yes I am really that old) 😂 there were the days in the 50's and 60's when drivers were more gentlemanly.  Boring but that's how things were. The pundits are comparing this to Prost and Senna. Maybe. Senna was my favourite driver of all time but he wasn't beyond a dirty move.

Not writing an essay here but then along came Schumacher. A brilliant driver but really dirty. To be honest he only deserved 5 of those 7 titles he won. Those were the days when drivers were disqualified from races.

I have followed Lewis since he was in Karting and I knew he had a special talent. No-one can ever claim he he is a dirty driver. Max has a stupendous talent which has to be admired. However he is not beyond a dirty move or ten. I can't count the amount of times Lewis has had to back out or be taken out. Add to that the stewarding decisions have been pretty pathetic. At one time in Charlie Whiting's day, decisions were made pretty well immediately. Now drivers are often waiting nearly 24 hrs before knowing their fate.

I know this last race in Abu Dhabi will be crunch time. I fully expect Max will be trying everything to win by whatever means. It doesn't matter if he gets penalised or even disqualified if he takes Hamilton out. His race wins means he will be WDC

There has to be an etiquette to the driving standards of a championship, and if (And I mean IF) Verstappen did take Hamilton out of the race, and it was proved to be intentional then he would be disqualified and could actually receive a points deduction - So would probably still not be Champion anyway.

But then the 'intention' is subjective unless you have telemetry to prove it.

To be fair @mm7000gb I am not in any way inferring Max is another Schumacher. I think he has great talent but has said he won't change for anyone. No reason to if he remembers there is a certain etiquette attached to driving standards.

Don't mind me, I'm desperate for Hamilton to win his 8th. Add to that I can't stand Horner and Marko. Max is surrounded by those people and his bloody awful dad who are not the sort of example a young driver needs.

When they had the drivers meeting a few weeks back after Max drove Lewis off track and wasn't penalised, EVERY driver except Max said it should have been a penalty. (Even Lando who is Max's best mate)

This time next week it will be over and may the best man win.

As for penalising Max by disqualification if he plays really dirty? Will never happen while we have Masi in charge of the stewards. He is so inconsistent, he's farcical. 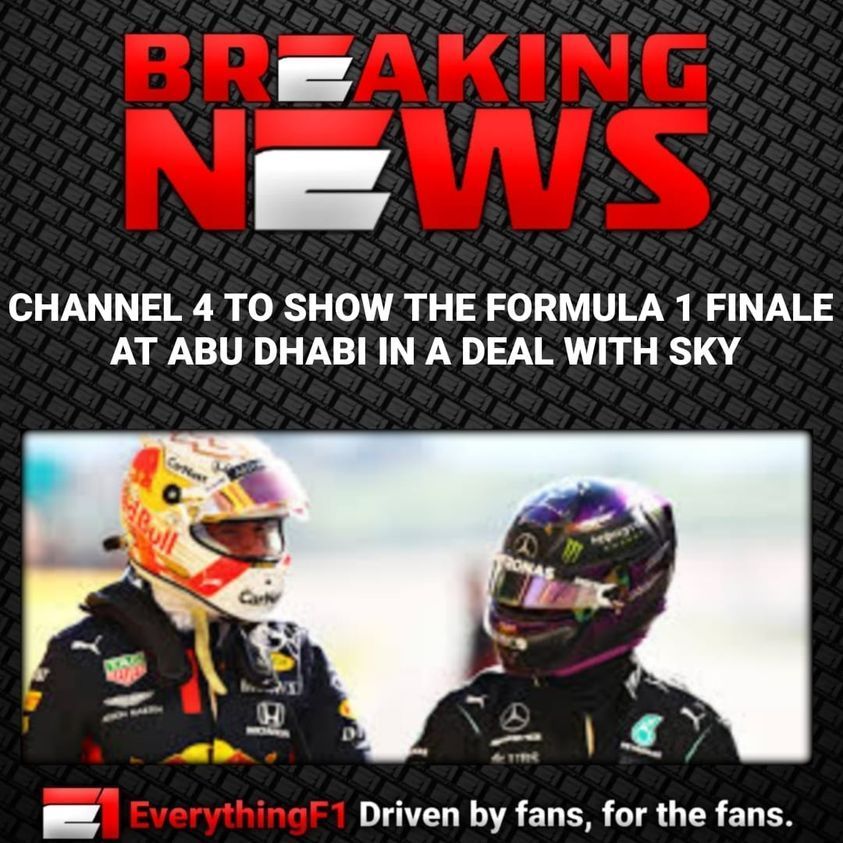 Hi @Cleoriff, Thanks for posting, that's good to know. I usually watch both Sky and Ch4 coverage, but I will have to make a choice now 🤔

Just looked on the Freeview guide, but there is nothing showing yet though.

I'll watch Sky and record Ch4 and make sure it records this time. It means I will have to watch SCD on Catch up but I don't mind. This race happens once a year. The Bookies have Hamilton to win. (I wish they wouldn't do that!)

Oh another thing I want to mention is about Martin Brundle. During last weeks race he was totally biased towards Max, (fair enough but I don't think pundits should show bias. By the end of the race and from now on, he has been supercritical of him and his driving standards. What's that all about? You can't say during the race, what a brilliant move (when he retook the lead from Lewis immediately he had given it back to him) ....and then write how drivers who cede a place should have to wait for one full lap before they attempt to take it back. Complete turnaround of opinion. Also how Max Is crossing the line of what's acceptable. I can't be doing with that ****. You either have an opinion and stick to it but don't change your mind as drastically.

A reason I hate DiResta, who dislikes Hamilton because of the fall out he had with his dad. He is always excusing Max and when he does interviews at the end has been known to call him 'mate'. Never calls Lewis mate. 😂

I've set Sky up to record the F1 show and Drivers Press Conference today, then will be back tomorrow to watch the recording of P1.

Sorry I'm not all that active on this thread but with the season coming to a close and the championship going down to the wire, it's exciting stuff. Just to get it out there from the get go, I'm a McLaren guy - my boy Lando has had some streaks of amazingness this season and I'm still in pain from that dreadful luck/finish at the Russian GP. Hoping Ricciardo finds his groove in the car/team for the 2022 season.

So... Max vs Lewis. While I'm not the biggest Hamilton fan, I'm very much not a Verstappen fan. I can appreciate his pace and tenacity, and he probably drives more on the ragged edge than Hamilton, but Hamilton has consistency and experience on his side and for me that wins it. The Verstappen fans will no doubt highlight loads of ways they feel he and RB have been unfairly affected for whatever reason, but the bottom line is on the track Lewis hasn't been anywhere near as wreckless and unsportsman-like as Max has been. Max is an aggressive driver and I've no problem with that, but I do take issue when he's so blatant in proving that he'll do literally anything to get the win, even if that means effectively trying to cheat by taking your rival out.

I'm excited for the final race of the season but I am worried about it. All RB need to do is have Perez t-bone Hamilton and ruin his race, all but guaranteeing Verstappen the championship and there's nothing the FIA could do - it'd be RB/Perez they'd punish, not Verstappen. Or Verstappen just loses any dignity he has left and intentionally/blatantly wipes out Hamilton and blames it on understeer.

Mercedes wise, they need Bottas to play ball in his last race with them - try and get a 1-2 start and use Bottas to make his car as wide as possible and hold Verstappen behind him at all costs, for as long as possible.

Fingers crossed for a good, clean race, but with all we've seen this season and both Max and his dad showing they'll do *anything* to win (which surely includes cheating/crashing), I'm not sure that'll happen.

Well Hamilton is my guy and has been since karting days. Of course he drove for McLaren when they had a winning car. I admire Max as he's a risk taker. however this season his reputation has taken a nose dive for me with his on track shenanigans. I'm no fan girl who thinks Lewis can do no wrong but rarely in all the years he's been racing, do you see hiim  driving with dirty tactics.

Apparently the drivers notes have been released to the teams and state quite clearly that any driver guilty of unsporting tactics will have points deducted whoever it is.

Lewis HAS to win this one. If he doesn't then Max will be champion. (even if they both had a DNF.)

Valium time for me 😂

Totally agree - Hamilton is no angel and he may say/do things off-track that raise an eyebrow, but on track he's a race driver to the core. He'll push the limits as all drivers do/should, but he'll never knowingly or intentionally play dirty. And anyone that points out Silverstone - nah, sorry, both drivers could have pulled out and didn't... That's a racing incident and not down to any one driver imo.

Fingers crossed for a good clean race. Honestly, personally I want Hamilton to win because I truly despise Christian Horner and don't want to see him gloat about how his driver bested Hamilton for months on end

Interesting @Chris_K. I didn't think anyone hated Horner as much as I do. Arrogant so and so. When Max fouls anyone it's hard racing, anyone else does it then 'how dare they' Such a camera hogger. So different to Toto.

There are so many commentators there this weekend. Nice to see Jenson for P1. Rosberg is coming later.