He didnt cut a corner though..he exceed two white lines and the car was jumping as he did it (loss of speed) when Max went over just one.

Anyway it proves they have the speed ..Well Hamilton does.

I agree Max is the one to beat. What gets on my wick are the comments... when LH wins, it's the car, when Max wins it's due to his brilliance.

@Cleoriff Well you can't ever count Hamillton out and there is a way to go yet, but I would like to see him win at least one of the next two races. Lets see what happens tomorrow.

https://www.autosport.com/f1/news/fia-to-slow-down-formula-1-pitstops-from-hungarian-gp/6604217/?nrt...
I have no affiliation whatsoever with O2 or any subsidiary companies. Comments posted are entirely of my own opinion. This is not Customer Service so we are unable to help with account specific issues.

Immediate thoughts from the F1 forum I belong to, is this is all down to Merc trying to slow down Red Bull who are the masters of pitstops.

Merc has never been mentioned only the FIA.

It's a bit deeper than that though. Some teams are claiming others (Red Bull) are using sensors to check the wheel is on correctly. This is totally against regulations as wheel changes MUST rely on mechanics only.

Horner was aked about it during practice and he was a tad cagey but was adamant no sensors were used.

Must admit I've always wondered why Merc with all the money they have at their disposal have never matched RBR's pit stops. (Fastest RBR 1.9secs) Merc 2.1 though usually 2.2 to 2.4.

If sensors are being used, then there's the reason.

Passive sensors are permitted, it's automated sensors that are prohibited.

If honest I don't  know much about the sensors. Only what I heard yesterday and read. It's all getting a bit silly really. Cited from the article above.

Citing safety concerns, motor racing’s governing body has addressed complaints that the stops of some outfits are faster than can be achieved by following the current rules to the letter.

The suggestion is that some stop procedures may involve a higher degree of automation than is expected, and this has allowed teams to achieve record-breaking times.

F1’s technical regulations contain a reference to pit stops which states that sensors must act passively.

Article 12.8.4 is clear that: “Devices which are used to fit or remove wheel fasteners may only be powered by compressed air or nitrogen. Any sensor systems may only act passively.”

It is understood that the latter segment of this rule is what the FIA wants to ensure is being followed.

Not a fan of Red Bull as I have said before but I can't see how this has anything to do with Health and Safety? Ridiculous!

Oh and in other news. Bottas has been given a 3 place grid penalty for his spin in the pits.

According to him they were trying something new with their starts... So he won't be a lot of help to anyone in tomorrows race.

I think the point with the sensor and the reason for the new rule is: A sensors can be used to show the wheel is on properly (Obviously this essential for safety reasons) BUT must only report to the wheel man, who then informs that the car is safe to drive away - The sensor must not be automated to control the wheel gun or send a signal any other way (I think this is what Redbull are suspected of doing) This is why they are going to introduce minimum delay times.

That's my take on it anyway. 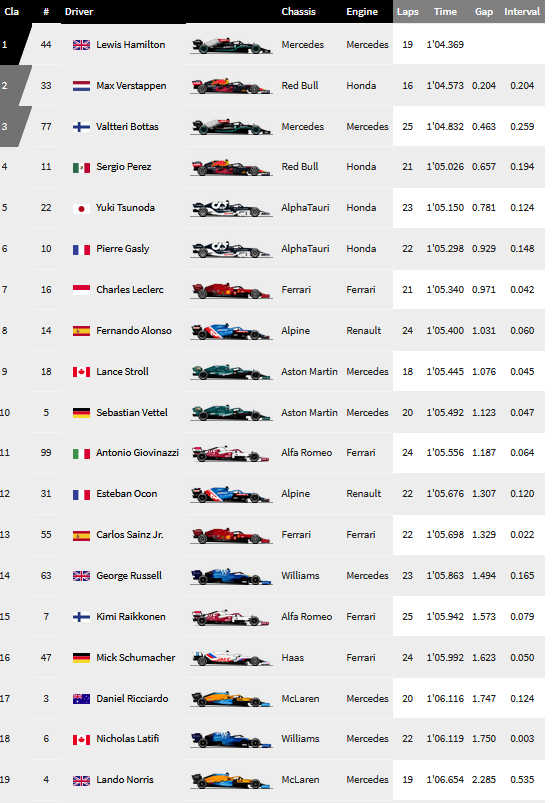 I think the point with the sensor and the reason for the new rule is: A sensors can be used to show the wheel is on properly (Obviously this essential for safety reasons) BUT must only report to the wheel man, who then informs that the car is safe to drive away - The sensor must not be automated to control the wheel gun or send a signal any other way (I think this is what Redbull are suspected of doing) This is why they are going to introduce minimum delay times.

That's my take on it anyway.

It still makes me laugh though (being non biased) For years we have had teams complaining about others for some sort of innovation. RBR complained about Merc's party mode and DAS

Merc are now complaining about flexi wings on Red Bull and are obviously the leaders in this query about pit stop sensors.

The best thing I ever watched was ALL 3 seasons of DTS and this is where my dislike of Horner came about. His 'behind the scenes' trips to the FIA are legendary. Nearly every week complaining about something and was so open about it.

Now the tables are turned and with Merc on the back foot, they are doing the complaining

That was a fast time by Hamilton. Lets hope he can lay it down in Q.