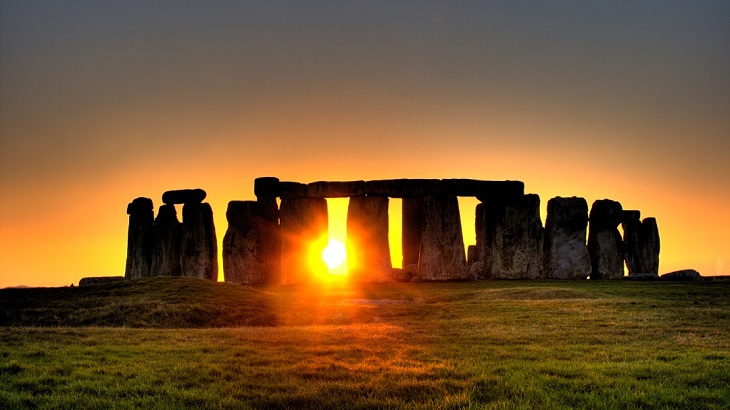 Good Morning everyone. Today is the Longest day, or Summer Solstice

This one is about The Summer Solstice and you may recognise one or two people involved.

It's your story so make it as mad, silly, weird, funny or creepy as you like.

You are only allowed to post one sentence and then wait for the next person to post another sentence before posting again.

Four friends - Marty, Luke, Terry (who was a girl called Theresa but hated the name, so Terry it was) and Chris took a trip to Stonehenge to watch the sunset at Summer Solstice. They stayed at a little village called Goreshead.

Before the sunset at 21.27, the friends decided to take part in a quiz at a very weird pub called

A Stab in The Dark.

Weird because despite the sun outside, the pub was dark and quite dingy. The lights were on even though the sun was out..

When they arrived they were welcomed by the Manager and his two bar staff. The Manager was called Peter Jones, but preferred to be known as  Pee Jean. He was rather funny looking as he said he was unable to get a haircut since lockdown , he fancied himself as a wordsmith and always took part in the pub quizzes. His two bar staff were Gill Shortbush (who kept bees) and Denny Riffraff (who kept cats….and was pretty good at doing the Timewarp).

The pub was quite full and on the stage was the Quizmaster called Miami-Jo. He was a real character surrounded by books and his quiz questions. Renowned for setting hard questions, as he was fed up of PeeJean, Gill Shortbush and Denny Riffraff winning every time.

Everyone gets drinks from the bar and with  that, a bell rings and the quiz starts.

Luke mutters to his friends..'Look if you don't know the answer, stop putting my name down all the time, I feel stupid'. Terry, Marty and Chris laugh and say, "well you are stupid Lukey boy". Luke kicks Terry's leg under the table and says he will pay her back for that one  day.

The quiz starts and the first two questions were easy. Everyone scribbled their answers down. Then the quiz got harder with a chemistry question being asked.

Suddenly there was a big bang and the lights went out

People reached for their phones to get some light but nothing worked.

5 minutes later the lights came on. The rest of the customers seemed frozen, they weren't moving.

An almighty scream was heard from Terry who pointed at Miami Jo who lay slumped over the table with his head caved in.

In front of Miami Jo was another table which held a hammer, an axe, a knife and a lead pipe...and then.......

Terry screamed when she saw the blood and hid behind Luke, who said "We`re geniuses! We can solve who killed Miami Jo". At which point, the frozen customers woke up, dazed and confused, and asked "What`s happened?"

"Miami Jo's been killed", yelled Marty, "look at the blood, look at his head, look at the gore" (Goreshead see)...

"Never mind the blood and the gore" said Terry, stamping her foot in temper, "We came to see the summer solstice not get caught up in a murder"....

All the unfrozen customers crowd around to see what Marty was shouting about they were shocked and frightened. One shook Miami Jo and his head rolled on to the floor.

Chris said," we can see the sunset, we can take Miami Jo with us in a wheelbarrow as magical things happen when the sun goes down at Stonehenge".....

So, Marty went on to pick up Miami Jo's head when he discovered that...

There were two heads so who else said Gill Shortbush....screaming

It wasn't Miami Jo's head at all. It belonged to a guy called M69, who had been counting all his phones, and it was his head which had fallen off... Miami Jo's head was still on but caved in...