Try The Tech - Microsoft Band One

Well my first ever review is for a Microsoft Band 1, is it a watch, fitness band a mix of the two or something entirely unexpected.

For reasons that are beyond me people seem very concerned with the packaging of the device, for me personally I care about the contents. The band comes encased in an insert with a proprietary usb wire. This is where I get to a minor gripe with the band, it doesn’t have a wall plug enclosed, now there are from what I can see two reasons behind this, first to encourage you to plug it into your computer, whilst it will sync with your phone via Bluetooth it, you have to manually plug it into your computer. Secondly it keeps the package small and neat, and really do we need a plug, over the years I have had a myriad of devices all with the USB wall plug enclosed, somewhere in my house I have  a small colony of the things, the operative word is somewhere, since I got the Lumia 950 with its wireless charger, the colony has been repeatedly raided by children who’s phones/tablets/other are all as, if not more, important than the air they breathe, in short I couldn’t find one that wasn’t in use.

Aside from a small start up guide there is not much else in there, but it does segue us nicely to setting up.

So you unpack the tech, charge it and strap it on, what next. Well its relatively straight forward, I am trailing the Band with a Microsoft 950, I synced up via Bluetooth and there we were, into a short introduction on my phone about how to customise the Band. It was short was sweet and uncomplicated, and then you are set up and ready to go. Time to find out what it is like to live with. However, before I do this I have to decide what the Band is, is it a watch?

Living with the band as a watch

So I go to work I put on my suit, and then I look to my watches, as a general rule they are follow a certain style, leather band, mechanical face, not to flashy but not looking like a first watch you buy for the kids. This is where I have my first problem with the band, it does not look nice, it’s not hideously offensive don’t get me wrong, but a matt black rubberised finish it lacks sophistication. Now this is not going to be a problem at the gym, rubberised works there who wants to drown their bands in sweat but in an office environment it looks out of place.

Moving on from the looks there is the size, I am currently sat typing this at my desk, I have the band on my wrist and my shirt buttoned over it, and I can feel it pulling at my shirt, a lot of this seems to be down to the face, a big slab approximately 2.5 inches wide, it just isn’t long sleeve friendly.

Moving away from the fashion side, it doesn’t exactly work well as a watch, the screen is orientated so that everything aligns itself along the horizontal access, as a man who wears his watch with the face outward on his wrist this means that the time is not in a natural position, and having seen the array of selectable facia’s on the iWatch it seems like a relatively small step to include something that would make use of the Band feel a bit more natural.

These negatives withstanding, it does have its place on the sports field, on the weekend I wore this as I took Bury Jrs FC to Stainton Road, the home of Radcliffe Borough to play in their first cup competition (won 1, drew 1, lost 2 didn’t get past the first round). The timer and stopwatch were easy to set, the screen although struggling somewhat in the direct sunlight was clear and legible, there are one or two improvements that could be made, but I will come to those later.

As it stands there are some aspects I like, but it would not move my day to day timepiece from my wrist.

So let’s see what else it can do…

This is the market that Microsoft seems to be aiming for, in my gym gear with my wireless headphones the rubberised shell works; its form follows the function. One of the much vaunted abilities of the Band is the ability to download work outs to the band, it’s what excited me. At 35 about a stone overweight and with questions hanging over my blood pressure, I want to make sure that I am looking after myself, I am following a plan rather than being aimless, but I don’t want to pay someone £20 an hour to shout at me.  So a band where you can download guided workouts is fantastic, unfortunately they haven’t for me gone far enough to make it a killer app.

In the first instance you select your workout there are various gyms who have signed up to provide workouts, Golds, Nuffield’s, Muscle and Fitness and so forth or you can program your own. In the first instance I opted for a Microsoft branded workout, after all it’s their tech so their workouts should be the most compatible. This is where I hit my first hurdle, I didn’t get what it was expecting me to do, as in the wording it calls each day a step, to me a step is part of one action, think Ikea instructions you don’t do a step a day, you do it all at once and then you have a bookcase which may just support a potted plant.

In the end I settled on a couch to 5k if nothing more than the mix of running and cross training suits with what I generally do anyway and so I downloaded. Upon commencing the workout a little message came up on my screen telling me to lightly run for ten minutes, so I started running, deliberately ignoring the big screen in front of me. So I ran and ran and sweated and after four songs (not a technical method I know but its mine) I figured more than ten minutes had passed and I should be moving on to the next exercise. Well 12 minutes had passed and I should have been walking for the last two, points for stamina, not so much for the band. The trouble is I was expecting a work out sat nav, at nine minutes I wanted someone to silence Metallica for as long as it takes to say, next work out in one minute, and then at ten to say commence walking, or for a vibration to make me look at my wrist, but there was nothing and that’s where it fell down. 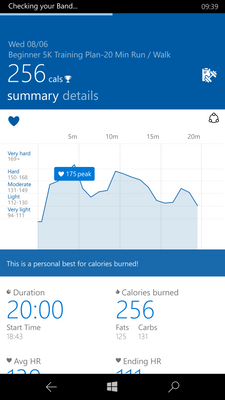 That’s not to say its all bad, I love the app, I like graphs, figures, I like being able to breakdown my workout and analyse where I could improve, because I don’t want to be Arnie, I’m Lester Burnham I just wanna look good…. Well we have all seen American Beauty, the point is you can get full Stato on this and that I like. In my world I want to work smart not hard, the band gives a good foundation, but again I feel if they had just pulled the trigger…

In a nutshell I wanted it to do my thinking for me, I wanted the Band to worry about what was next, that way I can just focus on the now, but it doesn’t on a side note generally I train with a heart monitor and chest strap, this will alert me if I exceed my optimal heart and need to slow it down a bit, if a £20 monitor can do this obviously the Band should right?

Its little niggles like this that don’t sell it as a killer workout tool for me, when I hear guided I want guidance and for me this when to start a new exercise and how productive that exercise is, that said all that should be achievable with a simple software patch the tech is there just not focussed in the way I want. However, this is the first time of using it, so we shall expect should teething problems, in a couple of days we shall return for round two and see how it goes.

Is it something unexpected? 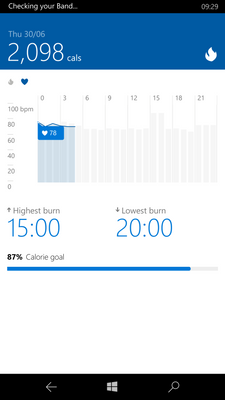 And finally just to conclude I sent the band back a fortnight ago, the review is a little late, but little Mathilda who should be here tomorrow rocked up early so I cut myself some slack, and today I am wondering if I miss it, and I am not sure I do, to be honest the problems from the start of the review remain, its not an attractive piece of kit, it was chunky and not suitable for everyday wear, but the main thing is it has not made a ground breaking difference to my life, but at least I can show Tilly Daddy’s heart rate during her birth, that’s 78 bpm that pretty damn calm (I think its broken…)

Wow, what an excellent review. That really was a joy to read, interesting and held my attention.

Thank you for this review, it'll be a great help to ppl looking to buy a smart watch/fitness band.

Just to let you know the Gear records my heart rate at 70ish when I'm relaxed but any normal day at home with HER and the rate is 80-85. ...Once hit 90 but a trip to the bar saw it drop to normal whilst hers went to red alert

Congrats on the birth of your daughter

@MI5 wrote:
Congrats on the birth of your daughter

Anonymous
Not applicable
In response to gindygoo


Wow, what an excellent review. That really was a joy to read, interesting and held my attention.

Thank you for this review, it'll be a great help to ppl looking to buy a smart watch/fitness band.

Thank you, although you will notice I kept the weight loss charts off there, oh the shame

Great review, and congrats to you and Mrs Choegyn!
Didn't use the workout bits much when I tried it. Disappointed to hear they didn't work as expected, given the price and the focus.
Perhaps problem solved with Band 2?

A solid review @Anonymous, a very helpful breakdown of the product! And congratulations again on the little one.

A lovely review @Anonymous. I enjoyed reading it along with your 'personal observations'

Congratulations on the birth of Tilly..:smileywink: