Understand that, if you will, when you have a virus it will knock you for six.  I was suffering, a fever at 102.2 (39 degrees celsius to the uneducated, young or without the useful app) and was confined to my quarters due to a contagious virus which had caused me agony and pain.

Even my GP was sympathetic, advising me to steer clear of the workplace and sleep as much as I could.

So there I am, fitfully sleeping on the sofa when the door buzzes and MSO returns with a package and a letter.  A letter, written from the Don himself*, asking for a phone that was fit only for a king of a mafia such as himself.  I had nothing in mind for this but since I was ill, I really wasn't worried about it.  I wrote back and said to buy what he liked.

He replied, saying that not to write something was to disrespect the readership or something like that.  Either way, I felt so rotten that I took the first device to hand, downloaded Beyond 14** and playing games combined with watching catch up TV for the week, I returned to some form of health and this review. 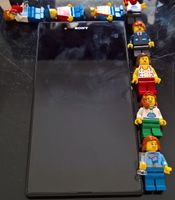 This phone is huge.  I kid you not, with a 6.4 inch screen, any man is going to feel that his hands are not big enough (unless he were Richard Kiel, rest his soul, or Shreik, turn him off).  Around the screen, top and bottom, is 11-12mm of space.  Down the sides is about 4mm of space, meaning that this phone is big.  The reverse is a glass back with an 8MP camera, capable of filming in 1080p.  I note it doesn't have a flash though.

The phone has an SD card slot, SIM card and a Micro USB slot. These are neatly hidden behind little flaps on the device sides.  There is also a single speaker in the bottom of the device, a headphone socket and NFC.  Wifi is a/b/g/n/ac - so a good range.  It also can offer 4G LTE, which comes as standard on most devices these days.

The body is thin though, being less than a minifig thick.  I've produced a 100% image so you can see, but to keep the size of this down, it's hidden in the spoiler below. 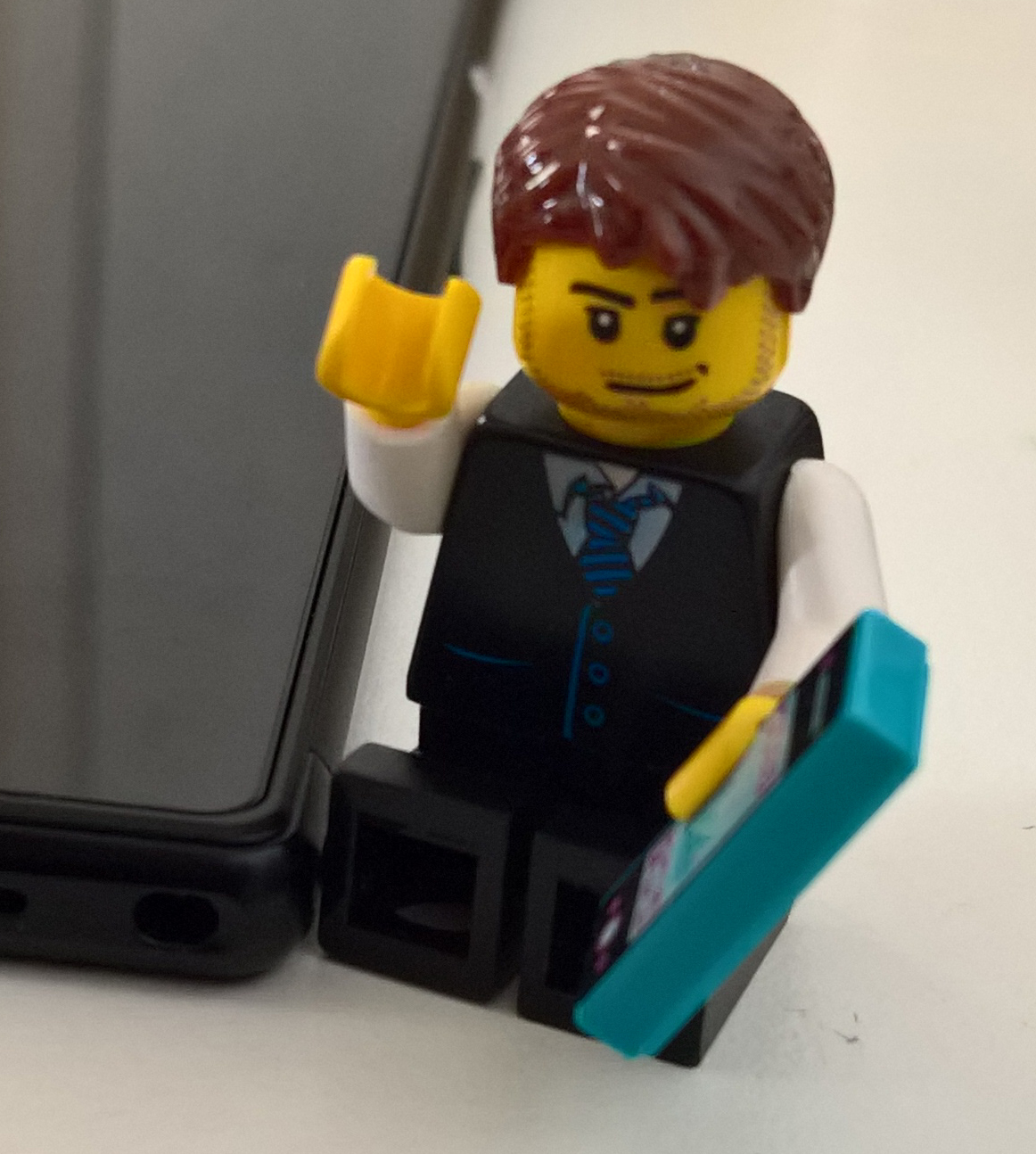 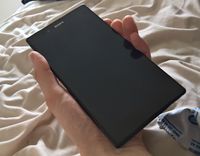 With a hand just over a hand and a half in size, the phone rests in the palm of the hand quite well.  The patient is right handed and usually holds the phone in the left.  As well as this, the dexterity of the patient is reasonable and the sneezes limited, which means the screen has not been tested for impact.

The buttons are within the touch of the smallest two fingers, meaning it can be powered on/off and the volume adjusted.  Given the size of the device, the volume and power buttons are tiny (but then it is a slim phone).

When trying to use the phone element, the patient remarked "I feel like a bit of a prat."  The patient's SO replied "Yes, you look like one too."

It's not the biggest phone-in-hand I've seen though.  Have you seen the phone that you have in my Lego town?  Given hand to ratio, the Sony comes in second to the phone on offer in Lego town. 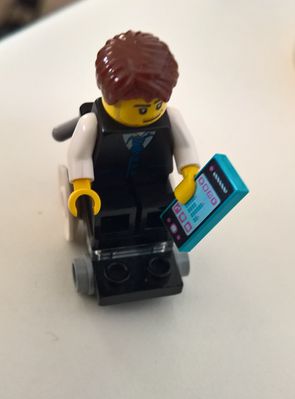 Screen
The screen is huge.  You can comfortably watch a film or tv programme without straining your eyes.  Although the audio quality is below par for a device that feels premium, there is a headphone socket as well as Bluetooth for audio.  In order to get an opinion on the screen size, I undertook a screen test: 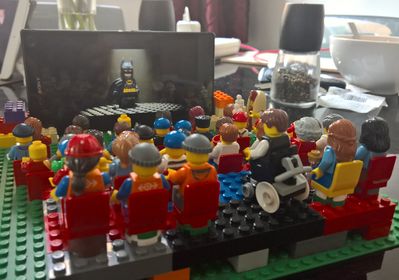 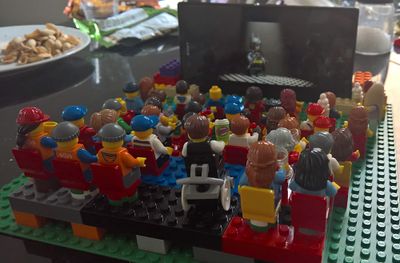 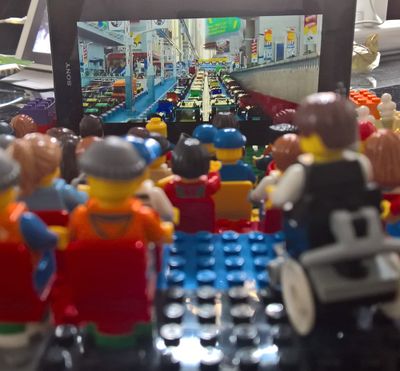 The audience loved the big screen to watch the Lego Movie on but complained bitterly about the audio quality, with people at the back saying they couldn't hear everything like they could from a Sony TV.  If you can count them, by the way - 39 minifigs took part in this test.  Not Toby though, he was busy in the Lego O2 Office.

If you have a screen like this, you're going to want to really use the screen to its advantage. Autodesk Sketch was one application I downloaded, finding the screen size a pleasure to draw on.  I enjoy using the pen on my own laptop (a tablet convertable), so to use my fingertip to sketch something that looked close to reasonable was a delight.

UKTVPlay, iPlayer (it worked on this device, unlike the Samsung Galaxy Note 4), ITVPlayer... you name it, they'll be worth using.

Games such as Beyond 14 and Magic Piano are also be fun to use on this device, with its multi-touch screen responding quickly to touch.  With the Snapdragon 800 chipset, this phone handles everything you ask it to.

The phone also comes with a huge number of Sony-own apps, meaning that you're not going to be bored for a while...

Spoiler
(I did this with an app. I know - it looks real but it was a app)

Conclusion
This device has a huge screen, a thin body and a quality feel to it. It's basically your widescreen TV in your pocket.  Given this, my personal feeling is that for the physical quality and screen perfection, its let down by the single speaker, the lack of flash and the fact it picks up your finger prints faster than a crime scene.

Given the size though, it is a worthy Samsung Tab competitor and if you don't care about it not being a phone so much, plugging your headphones in on the train and watching the latest episode of what-ever-you-enjoy is not going to be an issue.

If you're ill though, this is the device to get.  You'll be beating your top score in Beyond 14 without hurting your eyes and then resting up with a bit of Youtube or Taskmaster to recover in great time.

And if you're not ill and you're the Don of a community, this phone is going to make you look good too.

Such a brilliant review @Daddydoink. Are you lego men watching the lego movie on the Xperia? Haha!

Good work @Daddydoink Very informative and the Lego guys are a great touch!