In case you missed it, the BBC reported on itself and salaries: https://www.bbc.co.uk/news/entertainment-arts-54119758

Not that I begrudge what they've negiotiated, after all you're in the public eye and open to considerable abuse and your career can be over in a blink,  but Gary Lineker you could have been humble and either said thanks or kept quiet rather than act like the utter (insert applicable words here) you've decided to be: https://twitter.com/GaryLineker/status/1305824929846300672 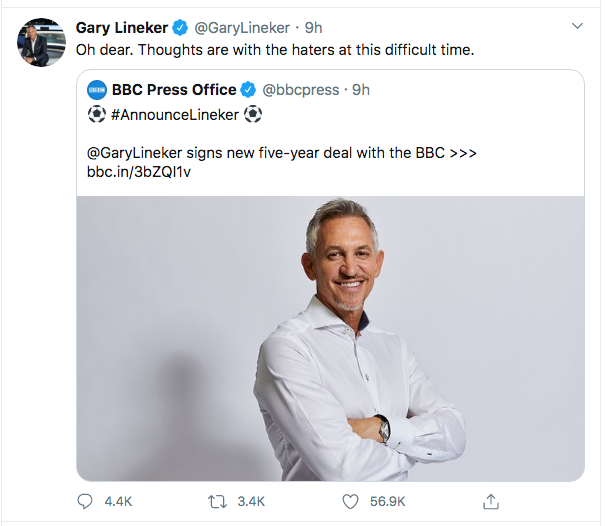 Still, that's not quite the arrogant bit. The guy who did the analysis in the article is rather short-sighted in his choice of words:

"The overall rise in pay for those whose salaries are published - around £1m - is not, in financial terms, huge, given the number of people to which it pertains, and the salaries themselves. Indeed, it is below inflation, and therefore a cut in real terms." (He does go on to try and justify this).

Really a cut in real terms? Relative to what exactly and what is in the contract they don't tell us about?

If you missed it as well, A Question of Sport has sacked Sue Barker, Phil Tufnell and Matt Dawson in order to take the show in a new direction. For goodness sake, its a sports quiz show that has worked very well for generations for any generation, how can you take it in a new direction except down the drain?

Well all I can say to add to your post @sheepdog is that they are all greedy, overpaid and overindulged from the public purse. Funnily the BBC are always saying that there's not enough money to spend on producing Dramas etc. They need a good shake out from the top down. Their salaries are gross and insulting to the public who provide the money.

I'm actually incensed at the sacking of Sue Barker, Phil Tuffnell and Matt Dawson. I love the show and think that trio works well.

If I wanted to be cynical, I would say the BBC has a habit of replacing older female presenters.

Sue Barker is 64. They replaced Arlene Phillips on SCD when she was 66. Alesha Dixon took her place (no dance background at all, other than winning the show)

Len Goodman, chose to leave due to his commitments in the USA. He was 73 at the time he left.

It would be hypocritical of me to complain about any salary paid to those who appear on TV or Sport.

My favourite sport is F1. My favourite driver is Lewis Hamilton. Mercedes pay him £45,000,000 per annum.

Heard on the news yesterday that Stephen Nolan, an NI radio presenter for news and current affairs and analysis is up in the top 10.
Don't want to look, it's depressing. And I do not listen to his show, but I'll bet some of the R2 presenters whose shows I listen to bits of are up there too. I did like Terry Wogan though... 😖