Well I've now had my new S8+ for a few days and had a good play. In a word I find the phone awesome. 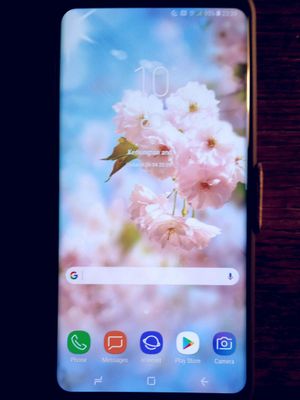 It looks stunning - glass front and back with shiny metal sides. I chose the orchid grey which is really beautiful. Because of nerve damage in my hands, which means I often drop things, I immediately put my phone in a case. A shame in way as it hides the phone's sleek lines but safer than possibly smashing a new phone!

It comes with a USB cable, USB power adaptor, earbuds (I now have a collection of 4!), USB connector, micro-USB connector and an ejection pin.

What, I hear you ask, is an ejection pin. It is for opening the SIM card/memory card tray located at the top left-hand corner of the phone. A fun operation I can assure you when you have shaky hands like mine. Even more fun is inserting the nano-SIM card which, if not inserted correctly, will pop out of the tray as I found more than once.

Anyway, nano-SIM card inserted and phone fully charged I was up and running. My first important task was transferring all my apps, games, music, contacts etc from my Note 4 to my S8+. This was achieved fairly swiftly and efficiently (considering the amount of data involved (16gb approx) through Smartswitch.

All files transferred it was time to personalise my phone. The first thing to do was get rid of all the Samsung apps Samsung think I need but don't, together with all my wallpapers that appear as apps. Once this was done I investigated Game Launcher which houses all your games in one app without them appearing on your screen(s). Now instead of 4 screens I have only 2. Marvellous. I also took advantage of secure folder to hide apps with sensitive information such as my bank app and my online shopping apps; thus removing a few more apps and cleaning up my screens even more. So far so good.

Then I took a look at my Settings options. One which interested me was the option to view your apps in full screen. Now as some of you may be aware the S8+ is taller and narrower than other smartphones. In other words, more rectangular. In video viewing terms an aspect ratio of 18:9 as opposed to the standard 16:9. I understood this to mean black bars at the sides of a video. Like watching a 4:3 film/TV show on a widescreen telly. However, I never thought what it meant when playing games. So I tried one game in full screen and preferred it. So now all apps and games are set to full screen.

One rather interesting result of changing all my apps to full screen. I have On Demand apps on my phone (and tablet) - BBC iPlayer, All4, ITV Hub, My5 and UKTV Play. All were automatically set to full screen but all videos had the black bars at the sides except My5.

I am not into taking lots of photos so I really can't comment on the quality of the camera in relation to other smartphones. All I can say is there are 2 cameras. Front camera is 8 mega pixels and the back camera 12.I. 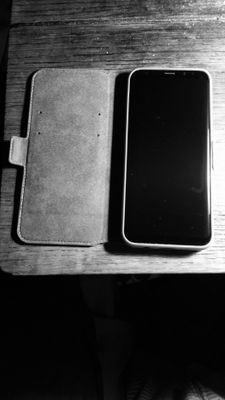 I also have not used the various security features which includes fingerprint and iris scans. My phone never leaves my side when I'm home and remains turned off and in my handbag when I'm out. I've had a mobile phone since 2000 and have not lost or mislaid one yet.

Was impressed with the quality of videos I watched on the On Demand apps which, to me, were slightly better quality than my Note 4.

The phone is faster loading than my Note 4. And I am still getting used to swiping up where I tapped before as there is no 'button' to take you from the Home screen to the apps screens.

I'm also getting used to the keyboard - it automatically switches back to the alpha keys when you key in punctuation (comma, dash ampersand etc) and then hit the space bar.

I am still learning about this phone and finding new things that fascinate or amaze me. I will be playing with this phone for many weeks to come but for the few days I've had it I'm very impressed.

Is it the greatest smartphone ever? So far for me it is. But that's my personal point of view as it does what I require quickly and efficiently. And not being a techno wiz as many are in the Community, I am unable to fully comment on all the 'bells and whistles' this phone has.

Personally I think Samsung have, in the S8+, made up for the Note7 disaster. And I would certainly recommend it. It ain't cheap but as I was taught at a very early age you get what you pay for. Quality costs!

Thank you so much. I was really worried I would bore everyone to death. And not being, as I say, a techno wiz there was quite a lot I am not familiar with yet.

But I do love the phone and if that came across I'm happy....

Thank you @blissgirl glad you enjoyed it

Glory1
Level 43: Bright Spark
Registered: 22-08-2016
Thank you @Anonymous. It is a beautiful phone and after my hard-worked Note 4 it is an absolute joy to use.
1 Kudo

Yes it would be much better

I was interested in reading about the games launcher app. That's useful indeed if you have lots of games taking space with their icons! Lots of info in your review that I didn't even know about this phone until I read it here. Iris scan?

Thanks a lot @Glory1

Glory1
Level 43: Bright Spark
Registered: 22-08-2016
Thanks @Cleoriff. I agree the photos should be included with my initial review to maintain continuity. I did send @Martin-O2 a PM about my second post which included the photos. So between us all should go to plan....😉

And no, of course, I don't mind. It was very thoughtful of you to do that.

If I could have posted my review through my phone, the photos would have been included. But there is a problem, even with my new phone, in sending such a long post. I posted the review through my Kindle Fire HD so couldn't upload the photos from my phone. But I decided the photos were needed to emphasise what a beautiful phone the S8+ is. Hence the second post.
0 Kudos

@Glory1 I've merged the 2 related posts together. I'll also add the images to the first post so it's all contained. Once done I'll move this over to the Community Knowledge Base

Yes @Marjo the Games Launcher is fantastic, particularly for someone like me who has so many games on their phone. My apps screens are looking a lot cleaner now without so many games icons.

The secure folder is also very useful if you have any apps containing sensitive information - a bank app, for example.

No problem @Glory1! The review is now in the CKB too

Nice review @Glory1. I always much prefer user (personal) reviews and yours didn't disappoint. Let us know of any other fascinating titbits you encounter over the coming weeks :smileywink:. X

Glory1
Level 43: Bright Spark
Registered: 22-08-2016
Thank you @Cairdeas. I promise to keep everyone updated on any new "titbits" I find. And I'm sure there's more for me to learn about this phone.

I am so glad I waited, after the Note7 disaster, to choose a new phone. The S8+ made the wait truly worthwhile 😄
0 Kudos

No problem @Glory1! Happy to help

This phone has Skype - which I didn't realise was a Microsoft product. Anyway just skyped with a friend who's in the US. Gave him quite a shock as from previous emails he knew I didn't have access to Skype. He's just got the S8+ too so we spent some time gushing over this phone before getting down to how we were doing etc. Love having access to Skype which means I can keep in touch with friends in the US face-to-face.