Since moving from Wales to London, I've been in tourist mode for these first couple of months. As my sensory overload continues, I've been looking at what museums, galleries and more have on offer...

At the Design Museum, they're currently running an exhibition'Waste Age: What Can Design Do?', until 20 February 2022.

Whilst reading about the exhibition, I came across this essay The Waste Age written by the chief curator of the museum, Justin McGuirk. Some interesting excerpts from it (feel free to scan through or read in-depth!):

"The Steam Age launched a great explosion of material goods that has mushroomed exponentially ever since, while statistics about our current rates of waste numb the mind. What does it mean to say that, by 2050, as much as 12 billion tonnes of plastic will have accumulated in landfills or the natural environment? What does it mean to observe that more than a million plastic bags are consumed every minute globally, and that this amounts to between 500 billion and 5 trillion a year?" 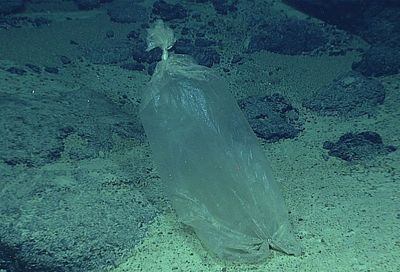 A plastic bag discovered at a depth of approximately 3,700 metres around the Enigma Seamount during a 2016 exploration of the Mariana Trench. Courtesy NOAA

"By 1950, the world was producing about 2 million tonnes of plastic each year. In 2019, it was 368 million tonnes, with more plastic produced in the past decade than ever before. Nearly half of all plastic waste (47 per cent) comes from packaging, while 13 per cent comes from textiles. As David Farrier writes in his book Footprints: In Search of Future Fossils (2020): ‘it is likely that every single piece of plastic ever produced and not incinerated still exists somewhere in some form’. It’s believed there are more than 5 trillion pieces of plastic in the world’s oceans, many in the gyre known as the Great Pacific Garbage Patch."

"Some estimate that by 2080 the largest metal reserves will not be underground but in circulation as existing products. About 7 per cent of the world’s gold supplies, for instance, are trapped inside electronics. Suddenly ‘above-ground mining’ starts to make sense."

"We know that the most sustainable building is the one that already exists, and yet developers are still incentivised to demolish and build anew."

This quote above rang true with me. In the last few years, for example, a number of older schools were closed down and replaced with a brand-new super school. Some of these older buildings have been renovated and repurposed into flats... but, it would have been great to see these other schools improved and continued to be used for education (at probably a lower cost and smaller carbon footprint) ⤴️.

"As the public becomes more aware and more discerning, manufacturers will feel greater pressure to change – and more fundamentally than today’s epidemic of greenwashing suggests. But if the principles outlined above were widespread, it would challenge the industrial paradigm of the past 100 years. What does a society look like in which fridges last 50 years, not five? Where individual ownership of goods is replaced by communal sharing? Where distributed manufacturing is the norm, such that distant factories and global supply chains give way to more local, bioregional and artisanal production, close to the point of purchase? What are the implications of a world in which some products last forever and others, made of organic materials, decompose in days?"

Personally, I've been trying to lead a more sustainable lifestyle. I'm currently half-participating in Veganuary (ate meat here or there), no longer drive and even plan to grow some veg/herbs on my windowsill 😁. I do find it slightly unfair that the pressure is often put on the individual, rather than these large corporations, but I want to make positive strides too.

I also love being creative, so I think I'll definitely visit this exhibition before it ends. It's interesting to me how design is helping us end 'The Waste Age'.

O2 is also making efforts to become more sustainable. These include:

You can read about O2's efforts on the website.

Some questions for those who would like to discuss:

Hopefully, this topic wasn't too long or boring 🤣. Love having a space like this to share! Always up for a chat or discussion, as I'm sure some of you are aware 😊.

Plastic bags, reminds me of this, from the film, "American Beauty":

Not that either your haunting photo or this equally haunting clip mean it should be happening.

Thank you @lewys-gp and @pgn

Until big business gets on with the whole environmentally friendly / no waste / re-use / re-cycle thing ..........

Personally ..... kitchen waste goes in plastic bags in the green wheelie bin collected once a fortnight. All small bins in every room in my home are lined with either blue plastic bags from buying goods off the market or bought in small black plastic bags.

Glass / metal / plastic goes from a large swing bin in my kitchen to the blue re-cycle wheelie bin collected the alternate fortnight ..... swing bin is lined with bought in plastic liners.

I would like to think the bin lorries could drop their waste to large incinerators with the heat used responsibly for say to power industry. I don't suppose we would like an incinerating centre near our homes.

I do my bit ... but ... the cut throat world of big business needs to get its act together.

We can only re-cycle what the Council can manage but this is quite a substantial amount of items.

There is a re-cycling depot quite near so take any electric items that are not working i.e. irons kitchen equipment.  Old leads from equipment.

Light bulbs/ batteries can also take items of furniture which can be re-cycled.  Any wood off cuts/fencing and larger metal items to their metal bins. Can also take fridges/freezers TVs and PCs.  This depot is very well used.

They have a board up outside to tell us what tonnage has been carefully managed and re-cycled.

Re-cycling from the Garden:

I have Garden Bins which I pay separately for with my garden plant cuttings branches etc., swept up

The council compost this and sell back later in compost bags.

I do not buy nor use plastic bags.

If  I need a bag I have a shopping basket and then have cotton bags with cotton tape handles.

All old plastic bags are used to collect waste and reused over and over.

Black bin is collected with items that are not presently re-cycled but this is very small nowadays.

Trying best within capabilities and availabilities.

I have seen this horrible scene in reality.😩

@pgn ... yes ... plastic bags caught up in trees / planting waving about in the air like shredded flags !

Your post above @TallTrees is very interesting ..... I do not have a car, and the council make it very expensive to pick up and dispose of an item ..... when I last enquired, needing help, it was £30 per item !

The council are expensive, they have handed it over to private collectors now so it is £30.00 and some items cannot be easily transported even in a car.

It used to be very much cheaper when the Council handled it to ensure nothing was dumped.  Does need a car, only a few people can walk there with small items.

If something large breaks down I get the delivery company to take it when delivering new item and pay a smaller fee for that.

I've been watching The Green Planet with the superb Sir David Attenborough.

This series has been using the most innovative equipment in the world to film the life of plants and trees. Due to climate change we are losing beautiful trees and plants. This then completes the circle of climate change

In terms of climate change, cutting trees, both adds carbon dioxide to the air and removes the ability to absorb existing carbon dioxide. If tropical deforestation were a country, according to the World Resources Institute, it would rank third in carbon dioxide-equivalent emissions, behind China and the U.S.

Sorry to ramble on but anyone who has an interest in saving our planet should watch this programme every Sunday.

Thanks all for the replies 😊. Glad to see it wasn't too boring/long of a topic.

@pgn, I loved American Beauty back in the day. I haven't watched it for years now. But yes, the similarities between that scene and the photo in the OP are uncanny.

I am in total agreement with you, @RunrigForever, that should it come down to big businesses (and governments) to do the majority of work we need to happen. Obviously, us individuals can/should do our bit, but often it's just a drop in the ocean.

Also, the point about how much councils now charge to collect waste is such a good one, @RunrigForever @TallTrees! I do my bit to recycle as much as possible, but am aware of waste being dumped in my local area. There must be a correlation between this and car ownership I think.

@Cleoriff, I have managed to catch two episodes 🌿! Such an important watch, and truly shows how beautiful our world is and why we need to take care of it. Thank you for sharing the deforestation fact too, it is crazy we're not doing more.

I know I deviated from the topic somewhat, although bottom line, it's all about saving our planet. 😉