Seems the 40th anniversary of PacMan was largely ignored this week! So to celebrate the golden age of video games, consoles and arcades, what are your memories and favourites between 1970 something and um, shall we say the year 2000 to limit the field for now.

Lets start with the ever classic Space Invaders arcade version. Found in most places usually with kids placing their 10p on the top in anticipation of getting a game. Usually met with swift disappointment by either a kid playing who could play forever on a single 10p or when you got a go, you suddenly found your 10p go had the lifetime of a few seconds as you realised you had no co-ordination! Followed by the rather quick shove-off by the next kid in line.

My very rare gaming experiences sometime circa 1978? was the never to be forgotten Space Invaders and progression to these two classics

I had a go at Space invaders but was poor compared to the males in the family.

I gave up until Sonic the Hedgehog appeared. Then I became obsessed. However, I was useless at that as well as I could never get out of the bloody Chemical Zone!! 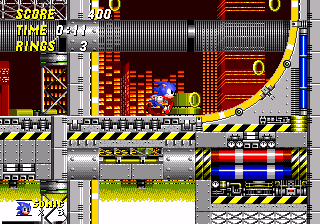 In fact, there was much laughter in our house at the way I waved the control around, hoping to catch some of the rings. I got fed up of people shouting 'jump now'!!

I gave up and that was me finished.

I remember playing Space Invaders in a pub, and being useless

When my son became interested in gaming it was Zelda and Alex Kid, he helped me. I enjoyed watching him playing the games

@Anonymous with your pub comment reminded me, I've played a massive Pac Man game a few years ago in a pub in Germany. It was a group Pac Man game the height of the wall in the pub basement. It was nostalgic and a lot of fun.

I'm not sure of the year (maybe some of you know?) but the early Rayman games on PC were some of my favourites.

Then of course the Skiing game and Rodents Revenge on our first Windows PC (windows 3.4? something like that) were some of my favourites.

→ COVID-19 support - Help and support from O2 during the lockdown
→ Access for You: Registration - Find out how to register for our Access for You service.
→ Just joined the community or thinking of registering? Check out this handy starter guide!
→ Have a query about your account? See if the My O2 how-to guide will help

Never a fan, or ven wanted Ninetendo and Mario Bros..

Then Sonic the Hedgehog on Megadrive came out. Bought Megadrive with free Sonic and was addicted.

I can`t remember how many [wasted] hours I spent trying to tackle it... So loved it...

I think Sonic is the only game I ever played on the Megadrive. Never got very far on it either just like Doom. Even though I had a Spectrum, I never "got" Chuckie Egg though Manic Miner and Jet Set Willy I liked.

Another memory: Defender. First saw this at an airport which was dominated by a couple of Australian kids feeding it before their flight left the UK. Had to wait ages and for a brief couple of mins there was a gap. Needless to say, 1 minute later I ran out of 10p's and by the time I went to er,beg from my parents, the Aussie kids were back with even more change! We were there for 3 hours and they were still going after we left. I presume they made the flight rather than the high score table

Had a lot more fun with the Atari 800 version or remake if you will - DropZone:

I remember most of the ones mentioned above, but I miss Keystone Capers from the Atari 2600..

And i've just found that Command & Conquer: Red Alert is now on Steam.. so when it comes down in price.. I will be reliving that all over again.

Oh & I see Missile Command has been reimagined for the youth of today.. which is a shame.. as it was perfectly fine the way it was!

@Anonymous You know the older C&C games are free: https://cncnet.org

Ah Missile command was great with the trackball. Maybe thats why I prefer a trackball over a mouse