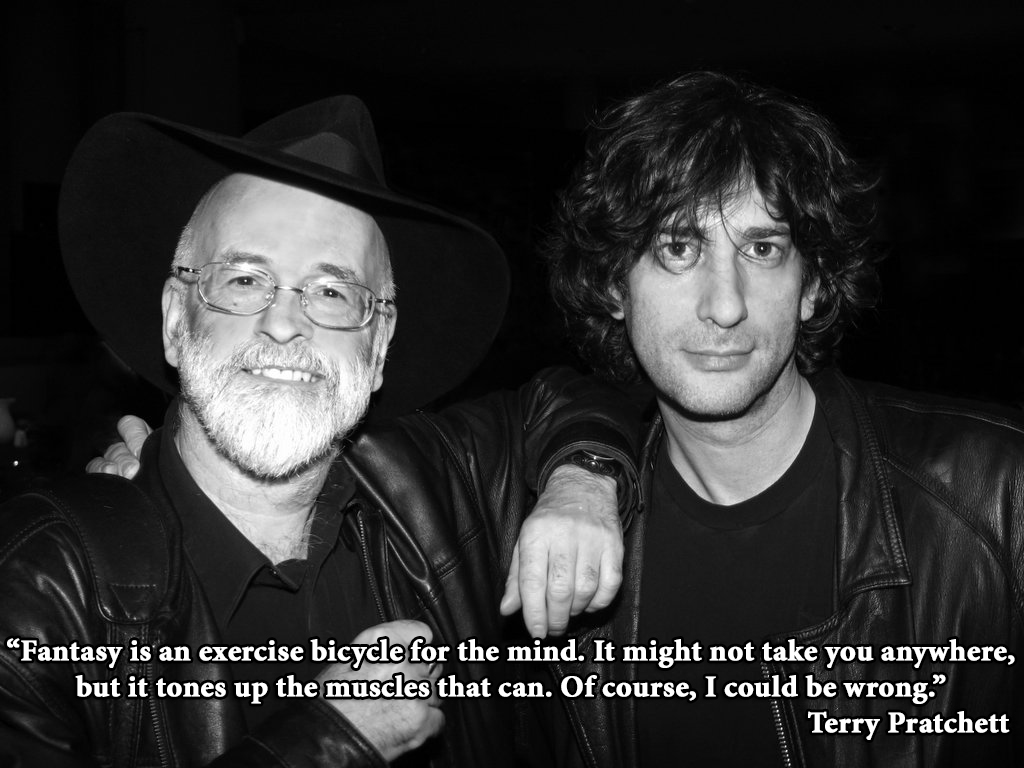 One of my favourite books, by two of my favourite authors, Neil Gaiman (r) and the late, great Sir Terry Pratchett (l), is coming to the small screen, courtesy of Amazon Prime, in 2019.

The trailer looks like the mayhem I imagined as I read the book - can I wait?

Looks right up my street @pgn. I look forward to watching it.

Message 2 of 18
1,449 Views
Share
Reply
Anonymous
Not applicable
In response to Glory1

Never heard of it! (Might have to look it up later)

Neither am I but most of these fantasy things aren't my cup of tea anyway. That trailer is just begging to add the Dr Who theme tune and titles at the end!

Neither am I but most of these fantasy things aren't my cup of tea anyway. That trailer is just begging to add the Dr Who theme tune and titles at the end!

It's the theremin, isn't it? Doctor Who and Midsomer Murders both rely on it for that eerie tone to the theme...

I didn't read the books but watched the excellent Sky adaptations of The Colour of Magic, Hogfather and Going Postal, the first two of which I ended up buying on DVD.

I've not watched the trailer at the time of writing but I definitely think I'll be watching this, the man had an amazing mind and was taken way before his time in such a terrible way.

For a great many years we had the full works of Sir Terry in our book-case. One a first edition and signed by the great(?) man himself. These were my son's books and he was into the whole fantasy and 3rd World phenomenons. He had all the box-games, CD's and Nintendo/X-Box Games. He did roleplaying online and even now meets up with like-minded roleplayers in Berlin.

I think it was a turn-of-the-century university must-do thing alongside with back-packing! (which he still does all over the world) He's also just completed a month in a temple in China doing Tai Chi as a milestone for his 40th birthday! Must be some kind of slow motion Ninja now! Where did I go wrong as a parent?

Thankfully when I sold the house, he came over and shipped all his books to Berlin and there were 5 big heavy boxes.

....and in all those years I was never tempted to read one of that genre of books!

Brief lessons on different cultures' mythology back in junior high (or middle school as many are now calling it) gave me a love of fantasy and, though a different genre entirely, sci fi. Add to my already tremendous love of horror and you had the school nerd. Don't get me wrong I love other genres as well, crime and legal thrillers to name two. But my biggest loves are fantasy and horror: the written word and the visual. Just received Once Upon a Time the complete series to empasise my love of fantasy and fairy tales.

Yes, I'm reverting to my childhood

I must admit to having not read much of his work, despite being a big fan of the fantasy genre.
My favorite author(s) are Raymond E Feist and Terry Goodkind.
Will have to give the book a go before the series is broadcast.