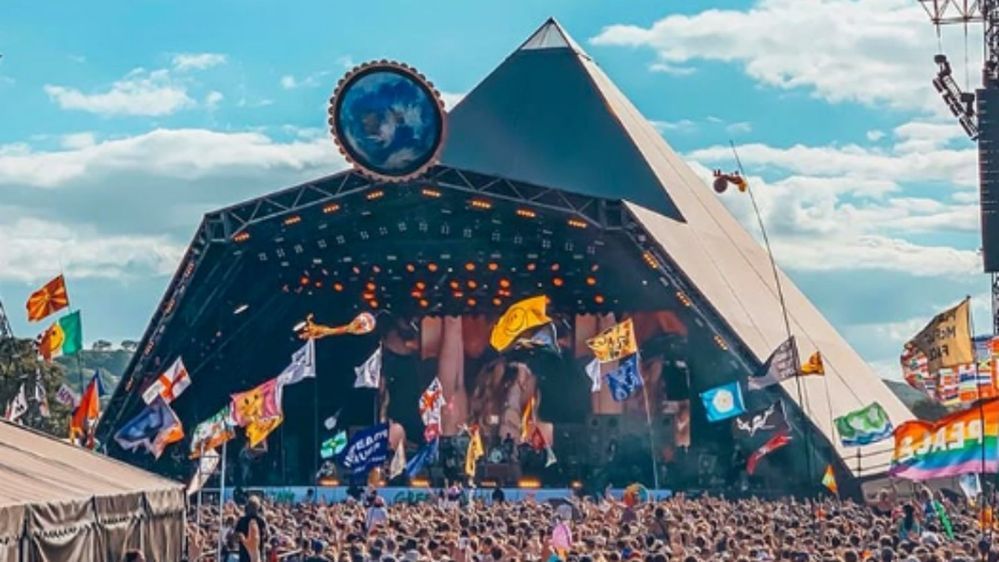 You may or may not realise it, but arguably the world's biggest music festival is happening this weekend. Today, many thousands of people will begin travelling to Worthy Farm, for Glastonbury (Glaston-Berry, if you're American) Festival. Let's hope they're not too disrupted by the train strikes either 😅.

I feel fortunate to say that I've been five times. But, how? That can't be possible. Yes, it's true; actually, it was five times in a row. Very lucky to say the least. Alas, this luck has now run out and I do not have a golden ticket this year.

So, anyway, I thought I would give the best place on planet Earth a well deserved shout-out today!

I would love to see Paul McCartney this year! But, will make do with watching it on TV... That being said, if you spot some good highlights, let me know, please 🙏!

Sadly my festival-going days have been a thing of the past for some time now but still remember the fun at Reading Festvals and Knebworth where I saw some brilliant bands.

I`ll be glued to the telly to watch Paul McCartney at Glastonbury and seriously envy those who have tickets to see him live at Glastonbury.

Will be glued to the iPlayer this weekend.

Never been @lewys-gp but feel as if I have. My eldest son has been year after year (even back in the days when it first began and you could get in through one of the fences. This was before there was so much security and wrist bands were hit and miss.😂

Unfortunately he has missed out on tickets for the last 4 years. Even the resale in April. His daughter (age 10) is going as she appears with a group of artists called Area 51.They dress up in high tech clothes, have a massive robot, and do all sorts of weird things. When they dance, she stilt walks and when they do acrobatics, she is the 'little kid' who is thrown through the air and caught by the others. So my lad has gone once as her parent. Her Mum claims that gig now. 😂

He has seen every act and headliners.

The problem is, the amount of acts on in different areas, makes it difficult to see everyone, so he has done a spreadsheet planner!

Nowadays though, Glastonbury is renowned world wide and the day the tickets go on sale is a nightmare.

He has seen Paul McCartney who headlined some years ago. He didn't like him pre Glasters, post show had completely changed his mind.

Thankfully the BBC show highlights over the three days on BBB1,2,3 and 4. so I'll see everyone I want to. Can't wait. ❤️

Wow, @Cleoriff. That's one reason to encourage your child to pick up an instrument or take up dancing 😂. Sounds like he has done it all, so probably doesn't feel too bad about missing out these days. But, yes, it is now a beast of its own! So much to do in very few days.

I'm looking forward to a relaxing weekend watching lots of highlights on the box 📺.

My son is very good friends with the guy who started Area 51 (Matt Page) so they know my granddaughter will be fine. Apparently appearing as the Caravan Of Lost Souls this year @lewys-gp  😂

My son is off to Portugal in July to the Super Bock Super Rock festival.

I prefer Download Festival, much more my cup of tea, and a fair bit of headbanging 🤘

I work in IT as an Enterprise Messaging and Collaboration Tools Administrator (Office 365, Slack and much much more) and manage hardware both Mobile and Desktop / laptop, my desk is a bit like PC World

We truly are spoilt for choice these days when it comes to festivals, @Cleoriff @madasaf1sh 😅.

When I was in Barcelona, I went to Primavera. Saw so many good acts on those warm Spanish nights 😍!

I've just watched the news and the gates have opened this morning at Glastonbury. It's sunny (for a change and there are 1000's arriving. The field looks lovely. I just hope those who attend have a better understanding of saving the planet. Last year the amount of rubbish left, tents, barbeques and black bags of litter and just litter all over the site was damn disgusting. 😵