Gatwick's runway has reopened after drones caused the airport to shut down for more than a day.

The airport felt this was a deliberate attack to cause as much upset to travel arrangements.

Airport authorities even called the army.. 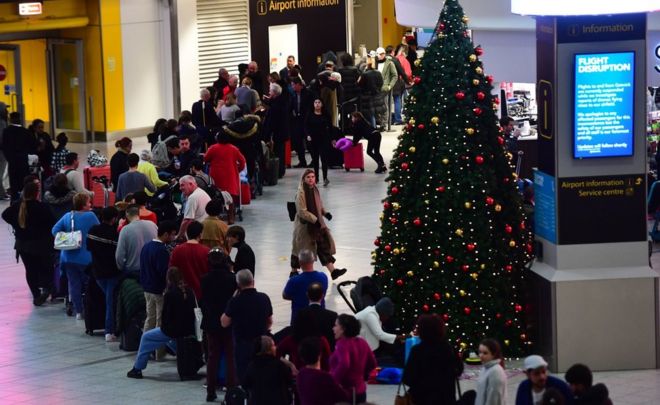 What drone?
All these people, not one single photo. Not one single sighting on a skysnooper.
Sorry to burst bubbles over this, but that's no drone.
Drones don't fly in rain,
Drones batteries are MAXIMUM 30mins
Drones are easy to spot and follow.

Dunno what this is , but it's not as it appears.

I appreciate your love of drones @viridis and you have given us some great pictures.

There again you don't go flying yours near airports

They are currently stating no other airport has been targeted in this way, It's unprecedented.

I think they are using a transmission blocker, which is why the runway has been opened.

I can't see any airport closing down on a myth. It will cost them millions.

I'm definitely no expert on drones. But if it wasn't a drone what was it?

There was clearly something flying about that shouldn't have been. I agree @Cleoriff that Gatwick wouldn't have shut on a myth or whim. They can't afford to, particularly this time of year when thousands are travelling home for Christmas.

They can't afford not to
ANY report of a drone in an airfield should be treated as genuine. But..

Technical evidence, lack of "verified" sightings and machinery limitations suggest strongly that they were chasing something that wasn't even there.
GPS flight controllers don't even allow most drones near airports, they simply won't go near them.
Drone batteries are not magic beans, these things have 25 minutes flight time, larger drones around 12-15 minutes, they also take hours to charge, making the times of sightings, impossible.
Reports came In mostly off public, the only photographed evidence is that of police helicopters, this is proven, yet the media aren't interested, in fact.. the sun, mirror, mail, metro are all running a picture, that was proven by ground crew to be a helicopter, the source of this photo edited his profile to look like a pilot for easyJet, once the media got the photo, he edited it back to his normal chav like profile, and then deleted the posts and then his account. Feel free to check.. he's gone.
Not a single shred of evidence can prove the existence of a drone at Gatwick, not one shred. And think how many people were there, how many reporters, how many plane spotters, how many news crew, how many photographers with huge long lenses.. not one single picture.
The suggestion that this drone was a modified industrial drone would give it a huge body size, we're talking 3ft across with 12" propellers, 8 of them, you tell me that a police helicopter couldn't track it with all its alleged appearances? Yet on 3 prior occasions in this country, police have simply followed drones as small as 11" total size back to owners. These things are not fast, the bigger they are, the slower and less agile they are. Again, not once was a drone seen by helicopter crew, or followed.
The airport had the police special equipment there, namely a skysnooper, this device will identify and locate ANY drone or electrical item in the air that gives off radio waves within 5 miles, 12 miles in USA, this device didn't/couldnt find or locate ANYTHING in the period it was used. During its use, there were further reports of these objects. Again, no one is reporting this.

Obviously, reports must be taken seriously, and quite right. I myself have reported illegal drone use at an airshow, the fire officers thanked me and investigated, it was found out to be an authorised use so it was all ok, i also have reported illegal use to picture sites and video sharing sites, these videos and photos can damage us all.
But. I am absolutely sure, 100% that there were no drones at Gatwick airport. And I consider the factual evidence supports this.

People say "they lost millions. They wouldn't do it on a whim, etc etc"
Actually they would, and they should. This country is still on high terror alert, any reports like this MUST be taken at the most extreme of seriousness, if you called Birmingham tower now and reported a drone near the airfield, it would Immediately shut down, this is protocol, even if the report is nothing more than a joke, or mis-sighting. The problem comes when the public and media take reports as gospel and become judge, jury and executioner based on a report off someone who simply said "what's that? Is it a drone?"
My hobby is now destroyed, not because of "some idiot with a drone", but because the public, and media don't give two hoots about evidence before condemning people.
I will be putting in a freedom of information request to Sussex police once this case is finished and will not be surprised at all with the responses to the questions.
Remember, not one shred of evidence in 24 hours, 26,000 people , 1,000 media, maybe total of 20,000 cameras.
Not one image.

When asked on the news today whether it was classed as a type of terror alert, the police commissioner would not be drawn on that comment.

In fact he was very calm and collected. Only saying that a drone problem of this magnitude was unprecedented at any airport ever.

However @viridis you know more about drones then anyone else here, so I DO accept  what you are saying.

Whatever it was, it will cost the airport a lot of money... though they wont compensate for flight loss.

I don't suppose they have a clause in the terms and conditions for drones...YET.

Im telling you now as a FACT. it's worrying how little the Civil aviation authority, the police, and airports know about drones, their abilities and their limitations.

One look at claims the other day of a drone near an airliner at 10,000ft proves that.

THIS IS NOT CUSTOMER SERVICE AND WE CAN'T ACCESS ACCOUNTS

@viridis you have put a very clear and excellent case for it not being a drone. You are the expert on drones. I am so very clearly not.