An Internet collection of fun and interesting facts around Christmas.

Santa stretches time in order to deliver all the gifts in one night. According to the United Nations children's Fund (UNICEF), there are 2,106 million children under age 18 in the world. If we assume that each household has in average 2.5 children, Santa would have to make 842 million stops on Christmas Eve, traveling 221 million miles. Given the different time zones, Santa has 36 hours to deliver gifts, therefore his average speed would be approximately 650 miles per second. It is less than the speed of light (therefore, it’s, theoretically, doable but still quite hard for a chubby old man).

Rudolf's red nose is probably the result of a parasitic infection of his respiratory system. However, Rudolf's relationship with his parasite is symbiotic: after all, the red nose illuminates the path through the winter night for the whole reindeer team.

“Jingle Bells” was written for Thanksgiving, not Christmas.The song was written in 1857 by James Lord Pierpont and published under the title “One Horse Open Sleigh”. It was supposed to be played in the composers Sunday school class during Thanksgiving as a way to commemorate the famed Medford sleigh races. “Jingle Bells” was also the first song to be broadcast from space.

In Germany, Poland, and Ukraine, finding a spider or a spiders web on a Christmas tree is believed to be a harbinger of good luck. According to one legend, a spider wove a blanket for Baby Jesus, according to the other – a spider web on the Christmas tree turned silver and gold once the sunlight touched it. One way or another, decorating a Christmas tree with artificial spiders and spider webs will inevitably bring you luck and prosperity!

The first commercial Christmas cards were commissioned by civil servant Sir Henry Cole in London in 1843. Featuring a family drinking wine, one sold for £8,469 in 2014.

The Christmas cracker was invented by a London sweet shop owner called Tom Smith. In 1847, after spotting French bonbons wrapped in paper with a twist at each end, he sold similar sweets with a “love motto” inside. He then included a little trinket and a “bang”. His “Bangs of Expectation” included gifts such as jewellery and miniature dolls. By 1900, he was selling 13 million a year.

It's technically illegal to eat mince pies on Christmas Day in England. In the 17th century, Oliver Cromwell banned Christmas pudding, mince pies and anything to do with gluttony. The law has never been rescinded.

Holly and Ivy have been used to decorate homes since the 9th century because they symbolise everlasting life. The holly represents Christ's crown of thorns and the berries his blood.

What fun facts do you know of ?

I have no affiliation whatsoever with O2 or any subsidiary companies. Comments posted are entirely of my own opinion. This is not Customer Service so we are unable to help with account specific issues.

Not nice hearing about Rudolphs parasitic nose infection. Still, had they treated it with antibiotics, it would not have been red!

No idea about the ban on eating mince pies on Christmas day. I have broken the law all of my life!! Off with my head!

I did read this fun fact.

Very interesting "fun facts", but they do need a much closer look:

First Christmas card: designed by John Calcott Horsley RA in 1843, at request of Sir Henry Cole, printed in black and white by Jobbins & Co of Holborn, London, and coloured by outworkers. First large-scale production was in 1868 by Charles Goodall & Sons of London, with cards designed by John Leighton with illustrations of holly, snow, robins.

Mince pies declared illegal by Oliver Cromwell and law never rescinded. Don`t worry @Cleoriff , this is a myth! Those of you who took part in the White Room Christmas Quiz will know the Puritans banned Christmas celebrations in 1640s but, as the Law Commission point out, when Charles II came to the throne in 1660 none of the 11 laws relating to Christmas remained in force.

Now for some additions to the thread:

First Christmas Tree in UK: not introduced by Prince Albert, husband of Queen Victoria, but erected and decorated b Queen Charlotte, wife of King George III at Queen`s Lodge, Windsor, for a party held on Christmas Day 1800.

Kissing under the mistletoe was not "invented" by the Victorians, but was first mentioned in John Brand`s Observations on the Popular Antiquities of Great Britain, published in 1813.

Male reindeer lose their antlers at the begining of winter (usually around first week of December). Female reindeer are the only deer which keep their antlers throughout the winter until they give birth in the Spring. 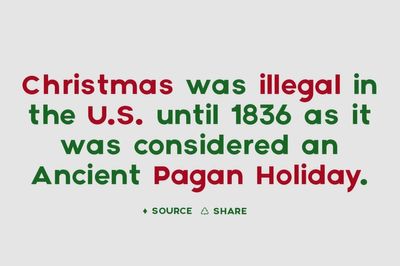 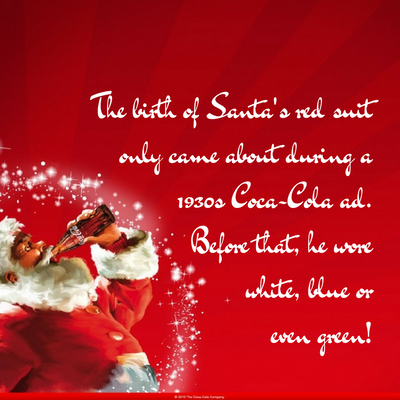 Interesting "fun facts" @TallTrees but neither are true...

Christmas was not banned in US until 1836 because it was thought of as pagan festival.

The origin of this is a meme on Facebook "For Truth Not Religion" on 10 Dec 2018 with supposed support of two press articles - the first has been traced to law passed in Massachusettes Bay in 1659, the second possibly a newspaper ad in 1660 referencing the law.

Although the US State of Boston did outlaw celebrating Christmas in 1659, this was revoked in 1681

As to the claim that Christmas was banned until 1836, the earliest reference to this is in James Harwood`s book "The American Christmas" pub in 1954. It has also been suggested that Christmas was legally recognised by the State of Alabama in 1836 - but there is no supportive archive evidence to support this.

Further to this, in the late 19th century, various US States introduced legislation giving laborers the day off on 25 December - but has nothing to do with overturning a supposed ban on Christmas.

Santa in a red costume did not originate with the Coca-Cola ads.

Thomas Nast`s "Portrait of Santa" appeared in Harper`s Magazine in 1881, showing Santa in a red costume:

It is true that Nast and others [before Coca Cola] did also show Santa in other colour-costumes inc green.

Hi @Mi-Amigo
Red is a happy colour and brightens up dull days of winter commercially more attractive.
I read somewhere that Charles Dickens popularised Christmas. I wonder why he introduced the Turkey into the festivities of his book, because I would have thought that it would have been very expensive during that time and rare. He was popular in the US and maybe had seen this bird in celebration meals.

The Wishbone Has a Real Name, and a Purpose

The wishbone is actually called the furcular, and is formed by the meeting of the two collarbones. Its purpose is to connect muscles, brace the wings during flight, and to act as a spring for the wings (just try to snap one before it’s dried and you’ll see how flexible they are). Wishbones actually help to prove that birds evolved from dinosaurs; even T. rexes had them!

You are right in thinking that Charles Dickens was credited with "inventing" Christmas. This dates from an article "The Man Who `Invented` Chrsitmas" by F G Kitson, published in 1903, which related traditions of communial spirit, kindness to less fortunate, fireside stories [e.g. ghost stories] to Dicken`s A Christmas Carol. Which might be the reason he mentioned turkey at Christmas in his book.

However, much of this was already in existence and known to Dickens before he wrote his book.

It is doubtful that A Christmas Carol would have influenced the poorer classes to eat turkey. From the 16th century, the upper and middle classes ate roast beef at Christmas. Turkey was eaten by the upper classes from 17th, whilst the middle and lower classes ate goose. But the poorest, if they could afford it, ate roast beef. It was not until the start of the 20th century that turkey became popular with the lower and poorest classes - with Christmas Clubs formed in pubs and local grocers with people paying a weekly amount during the year to pay for the turkey at Christmas. As most did not have an oven large enough for a turkey, communities would band together and take the turkey or goose to the local bakers who would cook the bird and the members of the community would share the cooked bird.

Thanks for that @jonsie for all the info on wishbones. I`ve learned something new today