Sign in or Register
Turn on suggestions
Auto-suggest helps you quickly narrow down your search results by suggesting possible matches as you type.
Showing results for
Search instead for
Did you mean:

Roaming in Turkey and Cyprus

One of the many questions that is asked in the Forum is regarding Roaming in Turkey and Cyprus.

First lets start of with Cyprus.

CYPRUS: is split into North and South, North being Turkish and South being Cypriot.

However there are a number of things you need to take into account.

Southern Cyprus is in the EU and therefore you can use you normal everyday allowence if you have one, or charged as per the UK rates.

Networks in Southern Cyprus are:

Northern Cyprus is Turkish and therefore not covered by EU, so there are no special rates other than Normal Roaming Rates. Turkish Rates which are in the “Turkey” Section of the information

Networks in Northern Cyprus are:

Its very confusing in Northern Cyprus 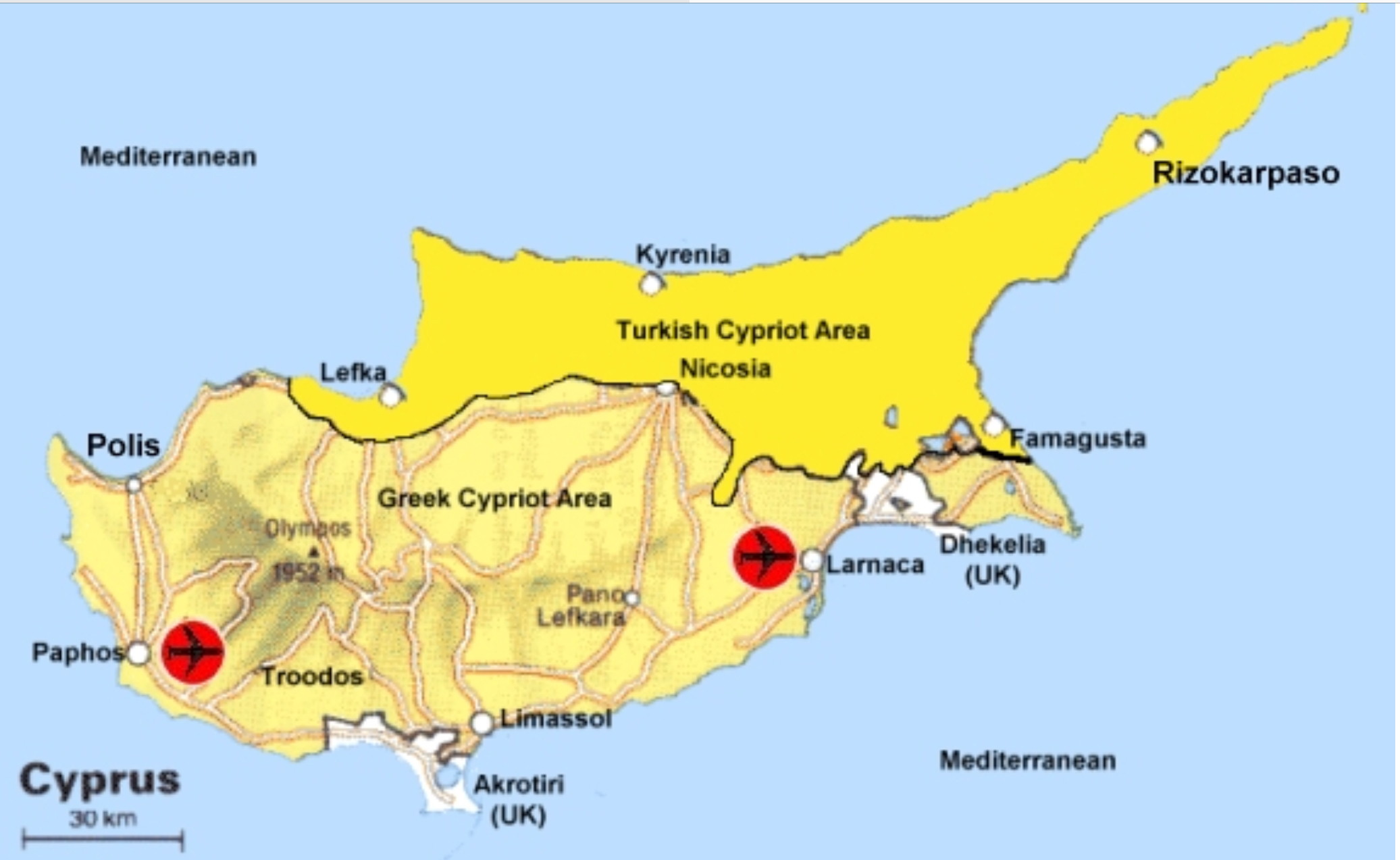 UK has Soverign Base areas. But there are no UK Networks present.

So when Roaing in Cyprus please ensure the mobile picks up a Cypriot network and not a Turkish one so you are not charged Expensive Roaming Charges.

Now even though Turkey is classed as part of Europe and Asia, its not in the EU (European Union)

Therefore normal roaming charge apply for PAYG. There are NO O2 Travel Boltons, (These are for contract only)

As you can see from the O2 Website. Turkey is not Covered on PAYG for O2 travel and normal rates apply

These are the rates for PAYG

As you can see there expensive. 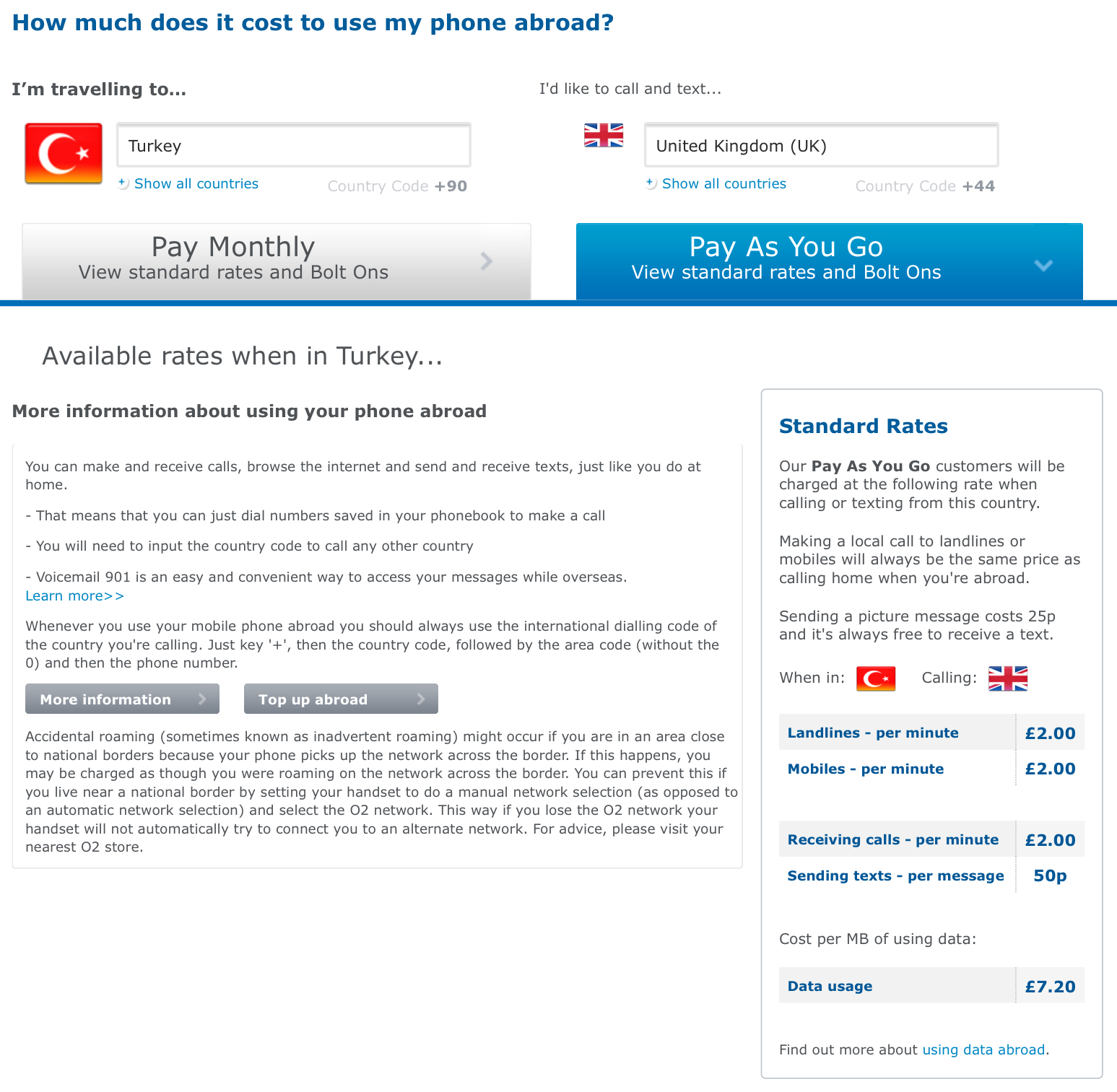 I really hope the above helps and all makes sense and can be found useful.

So both PAYG and Contract are covered with their own allowence.

EE and Three do not cover Turkey and Northern Cyprus in their allowence and Roaming is charged accordingly.

Information was correct as of today when this article was published

@darrengfExcellent addition to Roaming when with O2. Many people have been caught out as they think Turkey is in in the EU. The difference between being in Turkey on PAYG or contract is partiularly relevant

The explanation about Cyprus is also very useful ie North and South rates.

Thanks for the information.

Always happy to know.  It’s bad and I cant see why O2 Travel for PAYG cant include Turkey as contract can.  It’s a shame really.

Useful information as always @darrengf and hopefully members off to Turkey will look at this before they go or can be pointed to it.

Very useful indeed @darrengf and I learned something as well. I always thought Cyprus was split between Turkey and Greece. Just shows how out-of-date I am

Let's hope we still don't get questions from members regarding charging for Turkey or Cyprus after all your hard work.

one thing I didn’t update correctly but can’t ammend tonight.

there are only 2 Networks in Northern Cyprus,

Its very confusing in Northern Cyprus

Regarding Cyprus and Greece.  Modern Cyprus is not Greek but culturally Greek, it was however part of Ancient Greece

Cyprus is nearer Western Asia and not Europe, but Cyprus is considered as Europe. But the UN says it’s in Asia.  Confused or what.

The greek goddess Aphrodite was said to have been born in the sea around the island, and a major temple to her at Paphos became the center of her worship in the Aegean world.

Great job on this @darrengf! It's something that comes up a fair bit so a guide is very helpful!

Just to add. I was in Istanbul just 2 weeks ago. I decided to get a Vodafone Pay as you sim as it worked out cheaper that roaming with O2 contract (£1 per day with unlimited texts/calls and 500MB, Vodafone data vs £4.99 day 120 mins/texts and ? data, O2)

My experience was ok. I managed to get a H+ signal and the speed was good enough. Although on Vodafone contract you can get 4G speeds.

Initially upon landing, there was no service on our phones untill we reached the hotel where we suddenly latched onto the service.

0 Kudos
soulframe
Level 2: Apprentice
Registered: 12-12-2013
Yeah, I know. My wife's contract number managed to have a 4G connection most of the time we were there. The best I could get was H+ which didn't get slowed down at all.
0 Kudos

You must be a registered user to add a comment here. If you've already registered, please log in. If you haven't registered yet, please register and log in.

A Guide to Deal with Spam/Scam Calls and Text

Cancelling Your Contract - A Guide