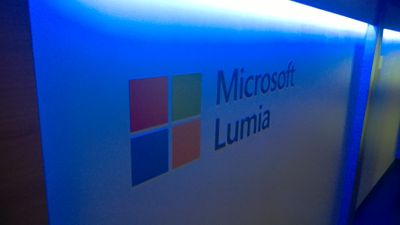 Today, with thanks to @Toby, I attended the Windows Mobile 10 Insider Launch.  This was a "hands on" event to let invited people get hands on with devices and continuum.

When I arrived at the event location, it was quite quiet - I'd fitted this in between another meeting and heading back home, so was a little early.  On display were a Surface Pro 4, several bands and a few 950 and 950XLs.

One of the Microsoft guys plugged up his prototype 950XL to demonstrate continuum, which is still in its core state.  Looking at the physical box, the device is powered by a USB-C plug.  It has a full HDMI socket, 3x USB, one of which is powered, DisplayPort and DisplayPort over USB-C.  The Full Size USB are only USB2 though, which is worth noting.  If your HDMI supports audio, it'll also play up to Dolby 5.1 surround sound.

Plugging in to the Continuum box with a USB-C cable, the phone detects the dock and projects onto the full screen, detecting the best resolution.  The start menu also transfers to the screen, with non-universal (i.e. pre-Windows 10 code) apps greyed out.  This leaves a limited choice at the moment, with a number of Apps known to be in the pipeline.

You can use Continuum to watch films though, either from a memory card or on your phone itelf, or through the movies app.  You can also watch videos you have made on your own device.

Office is the biggest benefit from Continuum.  As an Exchange server user and non-365 person, I was dismayed to hear that Office 365 was required in order to use Word/Excel/Powerpoint beyond the trial dates.  This is a big downside, as the point of the Continuum is using the tools that come with the phone - only to find you have to pay extra for something that is already built into the phone.  However, should you buy it, you have a great tool on your hands.

Benefits of the dock is the ability to use the phone whilst using other apps on the dock - taking a call, answering a text.  You can also use Powerpoint on the phone and broadcast to the screen, a useful tool when presenting to customers and colleagues.

The camera is another selling point, with the reputation backing up the 20MP lens, RGB flash and a 4K video camera (or 60fps HD).

The phones themselves feel robust, if not a little plastic.  You are likely to put a new case on it in minutes anyway, so not a bad thing.  The buttons feel very plasticy and not as strong as on the Lumia 925 - part of me looked at the Band2 and thought "I'd like to see that exterier on this phone".

The size of them though feels good - regardless of which phone you go for - and the silver ring on the 950 actually looks ok.

Was I wowwed by the event? Not overly.  For a chance to get hands on, there was very little to do, no devices set up with every whistle and flute.  I've asked though if I can try a demo device for two weeks to do a proper review though and hopefully I can tell you about the great things that can be done in more detail.

After reading this article, I wouldn't go near it.

After reading this article, I wouldn't go near it.

After reading that @Bambino that's probably a good call....

It's Ok if you change mobile regularly but I wouldn't be thinking of buying a Windows 10 Phone.

Unless MS are pulling out of the mobile market completely there will still be updates and support for the OS surely?
I have no affiliation whatsoever with O2 or any subsidiary companies. Comments posted are entirely of my own opinion. This is not Customer Service so we are unable to help with account specific issues.

Great to hear your thoughts @Daddydoink!

Is it an event you'd go to again? Have you been to many other simialr events? How do they compare?

Get involved:
• New to the community? This is how you get help.
• Want to know who we are? Come and say hi to us.
• Want to have a chat? Drop me a direct message.

I've been to other events that have had more energy and oomph. Lack of bits to take away, such as a small memory stick with info and promo on would have been good. This wasn't my top event by comparison...
Windows 10|SurfaceBook2-512|Lego|Wheelchair Reviews
Sony Xperia ZX Premium (because I loved the Try The Tech phone so much)
Sony Xperia XZ
Message 7 of 9
3,842 Views
1 Kudo
Share
Reply
Curr946
Level 26: Upbeat
In response to Daddydoink
Registered: 06-11-2014

At the end of the day, MS is out to make money. They need to be on mobile to stay alive. So windows phone, surface etc is their A game, but they also need a plan B. That's why you can get office, one drive, swift on IOS and Android.

I am a windows phone fan, but now that all the services are available on other platforms, should the core Windows Phone die, I could easily move to one of those OS's

Message 8 of 9
3,803 Views
0 Kudos
Share
Reply
Anonymous
Not applicable
In response to Curr946

Thanks for sharing your experience @Daddydoink!