This morning we have announced our ambition to become the first net zero mobile network. This is of course something I'm personally really proud to see and be a part of, and follows on from recent threads where I have discussed/announced us retaining our Carbon Trust Standard in 2019, ranging the BioCase - an environmentally friendly phone case, announcing O2 Recycle's 10-year anniversary, what happens to the waste at our HQ, and more.

O2, the UK’s No.1 network, plans to reduce carbon emissions across its business by 2025, giving UK consumers and businesses a mobile network where calls, texts and data are powered by cleaner, greener energy. This builds on the journey started in 2008, when O2 signed renewable energy across sites where it pays the bill.

O2 will also focus its efforts on the wider power of mobile, working beyond its own business to help other sectors in their search for more sustainable solutions. This includes its work with the UK Smart Metering programme and working with partners to replicate O2’s own success of saving 20,000 tonnes of carbon over the past eight years through flexible working technology.

Together, these commitments represent the fastest and furthest reaching carbon reduction program announced by a UK mobile network operator.

Mark Evans, O2 CEO, said: “Today, we’re putting a stake in the ground. We want to go further and faster, setting the bar in our industry to tackle climate change and build the greenest network for our customers. Every office, every store, every mast. We will get the changes done to be a Net Zero Business by 2025.

"Mobile can play a pivotal role to make our country more sustainable. From smart metering to smarter working. O2 will work with suppliers, partners and customers to ensure that this industry plays its part in delivering a greener country for us all.”

The Route to Zero

O2 has put clear plans in place to achieve its new environmental commitments:

Progress against both commitments will be reported annually and will be independently assessed and audited by Aenor and ERM.

Hugh Jones, Managing Director, Business Services, The Carbon Trust, said: “We are pleased to have worked with O2 for over a decade most recently providing advice on the reduction of their supply chain emissions by 30% by 2025. This is a crucial step in helping the company achieve its ambitions”

“Its record on supporting the environment, using 100% renewable energy at its sites and recycling three million devices in the last decade, deserves credit. I hope it inspires other firms to follow suit and do more to safeguard the environment.” 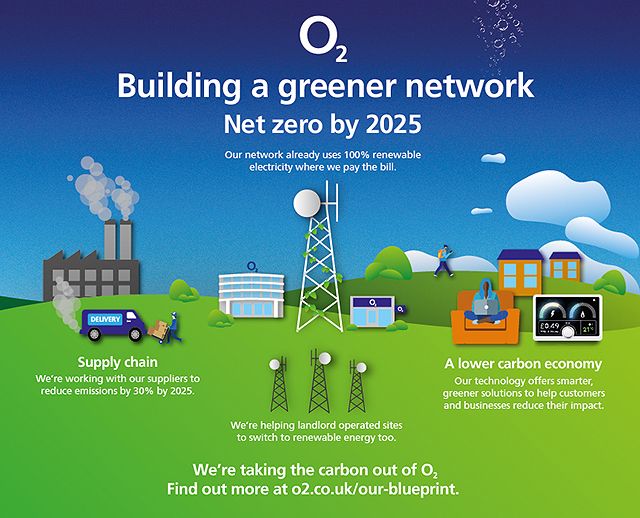 The announcement builds on a decade of moves from O2 to help tackle climate change, including:

Welcome news for a change.

Any company which not only recognises but also does something about the harsh reality of climate change, and seriously takes its own role in reducing the impact, has to be applauded.

My hope is that all of what is proposed comes about as soon as possible.

However, this will cost a lot to become carbon neutral. Who will be paying for this? Have O2 got money in their coffers or will the customer bear the brunt of the cost?

Please don't get me wrong, I applaud any large company who does so much to help with climate change. However, there are those people who have their heads in the sand and don't believe it's a problem.

Excellent from O2 and if only the big corporations around the woorld would do the same thing then we might then see things change. Very doubtful though.


Who will be paying for this? Have O2 got money in their coffers or will the customer bear the brunt of the cost?

This is a journey O2 started over 12 years ago. It’s an intrinsic part of running our operation, and as such we do not see this as an added expense; It’s just the right way to do business.

Thanks for that @Chris_K . Good to hear.

Network Function Virtualisation (NFV) seems to be a popular way for operators to reduce costs, does the policy extend to cloud provider/data centre colocation provider selection where these aren't hosted in your own or telefonica-owned facilities?