It's less than a month away until Mobile World Congress kicks off in Barcelona. Like us, you've probably seen loads of rumours - some might turn out to be true, and some may not come to fruition.

MWC has become a stage for which manufacturers like Samsung, HTC and others announce their new flagships for the year, but MWC is so much bigger than that. It's a roadshow and glimpse into the future - new tech we could soon see, such as new displays, better batteries, more powerful cloud computing, online storage, big data... Everything and anything related to the mobile industry will be there...

And so will O2! I will be attending the 4 day MWC event in person this year. I'll be looking at as much tech as I can and will be reporting back on my findings here and on our other social media channels such as Twitter & Facebook, so make sure you keep an eye out there too.

What about new handsets?
As mentioned above, we do fully expect there to be new announcements. Exactly what and from who, we just don't know at this stage - all we have are the rumours. Although Samsung & HTC both announced new tech last year, these 'keynote' announcements are separate to MWC - Unfortunately my MWC pass won't grant me access to these events as they are typically only open to the worldwide press due to very limited spaces.

So no coverage from O2 for new phones?
Far from it - for any announcements, we expect a live stream as has happened the past couple of years. I'll be live-updating the community the same as with previous announcements and would be great to discuss details/features/specs as they become official. I'll post placeholder threads closer to the time, so keep an eye open for those.

- Is there any particular tech or theme you're interested in?
- Think 2016 will be the year VR goes mainstream? Interested in this?
- What's the biggest tech advancement you want to see? Battery life, display tech, something else?

Once I'm out there, expect to see this thread updated throughout the day with photos and news from MWC. Make sure you tag me in with any questions/requests when I'm out there, as it may get quite busy - some attendees report that they walk 20km around the MWC venue in a single day, you know! 😉

Smart toothbushes? That’s Genius.
No, really – Oral-B were at MWC this year to showcase their new toothbrush called ‘Genius’. It’s made up in two parts – the phone app and the toothbrush. The toothbrush has sensors inside it and coupled with facial recognition from your phones camera, this combines to create what Oral-B call “Position Detection Technology”. What this means to you and us is that with the Genius, you’ll never brush too much or too little, and the toothbrush will slow it’s rotations and pulses if it detects you’re being too aggressive with the brush. 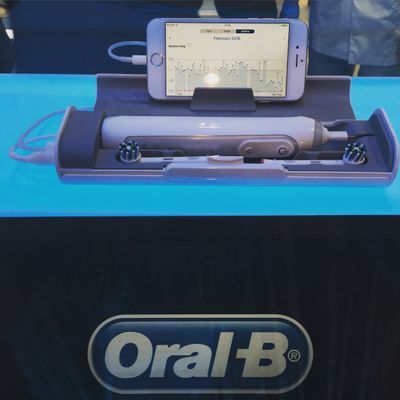 At MWC this week Epson unveiled their ‘BT-300’ glasses. These are fully transparent lenses with built-in OLED displays. What does that mean? Well, it means that you actually wear them like any normal pair of specs, but a portion of the glasses includes a transparent display, relaying different pieces of info to you. Because it’s OLED, the colours and sharpness of the display was stunning.

You’ll probably get some odd looks wearing the Epson BT-300’s, but imagine a future where your RayBan sunglasses might tell you the temperature and if you’ve been out in the sun too long, or when to re-apply some lotion, or your day glasses being able to identify a song playing and give you more info about it. 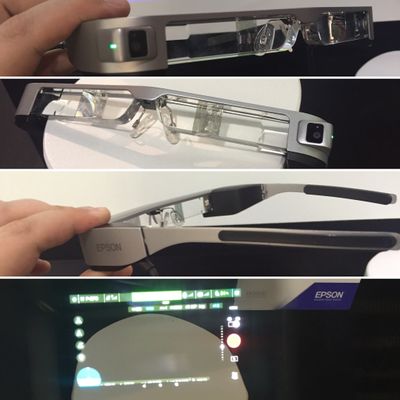 Wearables for pets. Make them glow and see where they go.
Wearables are becoming so diverse that they’e even being made for pets. One simple but effective product we saw was ‘NiteHowl’ from Nite Ize – it’s a light-up safety necklace for your dog that lights up different colours and is ideal for when you take your dog out for a walk at night. Kicking the tech up a notch, there were also several different GPS trackers designed specifically for pets and would attach to the collar. One such device was the ‘T-Pet’ from SK Telecom – it would let you get real-time positioning of your pet and plot out the adventure it’s just been on… Just in case you’re wondering what your cat gets up to on its adventures. 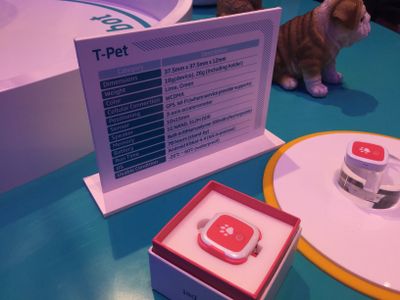 Smartwatches – And yes, there’s even a braille one for the visually impaired
Smartwatches are nothing new, but MWC did play host to some smartwatches which all looked brilliant in different ways. From the bling-bling of the Guess Connect to the simplicity of the KidFit 3 watch for children, MWC had it all. What really caught our attention though was the worlds first braille smartwatch called the “Dot”. The raised dots would re-arrange to tell the time, act as a stopwatch, timer, and it can even give directions as well as display your mobile notifications – all in braille form. 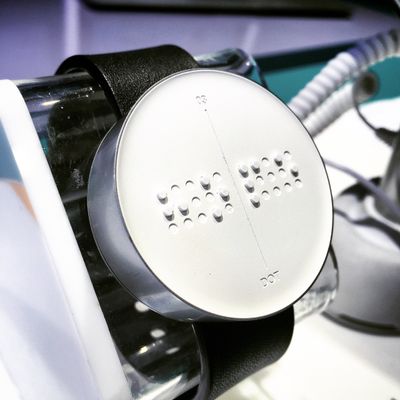 Smart homes – helping to automate and simplify your life
Smart homes are something we’re really interested in, and you can read more about our involvement here. When we stumbled upon TP-Link at MWC and saw they had smart home products, we had to take a look. We had a look at smart switches, smart plugs and smart bulbs, all of which could be controlled remotely via an app. What was really cool though was with the smart plugs, you could monitor and track your energy consumption and you could even setup your own schedule, to have them automatically turn on or off at certain times or on certain days. We can’t wait to see every home being this smart. 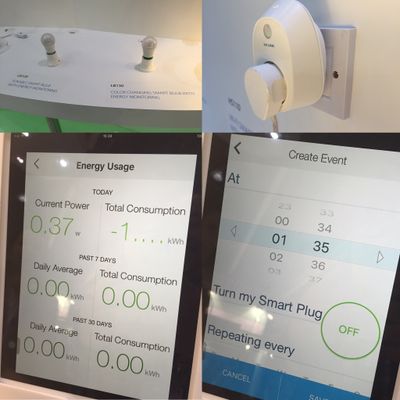 And that's it from us this year at MWC. We've seen some amazing new tech - stuff that's out now, coming soon, and might one day get released, so keep an eye on http://o2.uk/Updates for all the latest news and releases from us.

Truly amazing and it makes me wonder just how much the world has changed and what I will be missing out on in the coming years....

I remember when life was simple, embrace the technology but maybe I'm alone in thinking that kids today are missing out on character building life experiences. God, I sound like my dad