O2 have continued on with their excellent Try the Tech program and have provided me with a Microsoft Band (version 1) to try out.

It is a well formed, rugged feeling device that has grown more and more useful while reviewing it.  For the past week and a couple of days I have only taken it from my wrist to sleep (the reason why is explained below) and have found it to be quite habit changing. 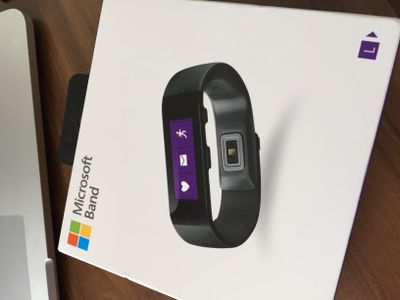 The Band is boxed quite nicely, a small watch sized cardboard box slips out from a white, printed sleeve.  Opening the inner packaging reveals the band, user guide and charging cable.  It charges over USB so can be plugged into almost any computer or phone charger to get it juiced up. 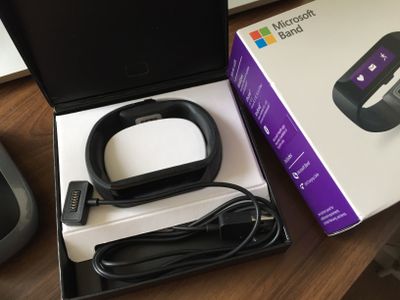 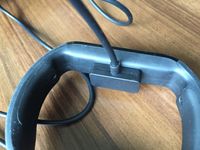 Once charged it is switched on by holding down the larger of two buttons along its side until it physically vibrates.  The band supplied is large sized and it fits my wrist very nicely.  An unusual clip mechanism closes the band around your wrist and tightens it for best fit as well.

The design of the band menas that there are a few lumps around the inside of the band for various bits of circuitry and likely the quite plump battery. 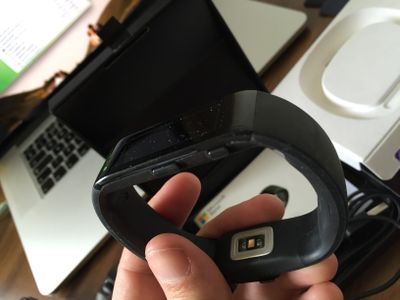 Overall the fit is excellent and even during recent 26 degree temperatures it was not uncomfortable to wear for the entire day.

Setting up the device was a breeze.  Download the Microsoft Health app to the phone (iPhone in my case) and clickon the option to add a band.  A few seconds later and everything is ready to go.  The app is incredibly useful, enabling lots of customisation and options to be applied. 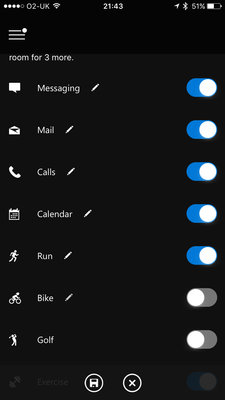 Tiles can be added to the band easily, new ones can be downloaded from an online gallery (though I found most to be quite superfluous, such as Major League Baseball updates!) and new backdrops can be applied.  I quickly added and took away the things I would or would not use on a daily basis.  Messaging, mail, calls, calendar and notifications can all be added and as soon as something happens on your phone the band vibrates to show you a related notification.  It works well in this regard but I do have a few concerns about the data transfer route which I will highlight later.

With everything set up as I would like it I started using it to monitor everything I could.  Heart rates are a little on the high side (tested against the Runtastic Heart rate monitor and good od fashioned finger on pulse for 15 seconds and multiplying by 4).  The measurement is more accurate if I turn the band round so the screen is on the underside of my arm.  I dislike wearing it like this however so just accept that the reading is around 8 to 10 beats higher than it should be.

So far I have used the band to monitor a couple of cycle trips, over 33 miles of walking and even two nights of sleep.

The user interface is straight forward and easy to use, side swiping through windows style tiles and tap to select and go deeper.  Two buttons enable switiching the screen on and off and starting an action.  Simple as could be really, swipe to the tile yo

The Bike trips were excellent.  Where I would usually strap my phone to my arm I felt liberated that the only thing I had on me other than my backpack was a small, unobtrusive wrist strap.  It showed me speed, distance, etc. while I was on the move.  Simply lifting my wrist to see this stopped me from being distracted from the road as well.  When I got back I sync'd the device to my phone (using the Health app) and saw my entire route tracked by the inbuilt GPS and translated into a mapped route.  It did exactly what technology should do in this situation, become not even a thought until it was requested to do something.

For walking the band has been great to keep track of the number of steps taken and distance travelled.  I used it to track a six day holiday to Ireland and it swiftly wracked up that we walked over 33 miles.  It doesn't track gps data in general walking (I could have activated the running app to do that I suppose) but I knew where I had been so did not need this anyhow.  Again, the health app showed distances per day and I could dig further into the data if i wished.

Tracking sleep was one area I was keen to try but also the one where I felt it fell over.  It does what it should, tracks sleep showing deep and light patterns, highlighting how much 'good' sleep you managed through the night.  However, the device feels odd to wear.  I hit myself in the head a few times when turning over, waking myself in the process!  Another bizarre side effect was that my wife (who can't seem to sleep with any radio devices in the room) had the lousiest nights sleep while I tried it.  The third night I took it off and left it in another room and she slept with no problems, coincidence possibly but unusual.  Overall it has made me question any device that needs worn on the wrist for sleep tracking.

Driving was a pleasent surprise and a funtion I was not expecting.  I entered a route into google maps and each turn or route notification was transmitted to the band making driving a great experience.  I knew a turn was coming up without having to see a map or hear a voice command.  Again, a pleasant surprise.  It did highlight one thing about the band however.

Data handling.  The device communicates with your phone by bluetooth.  Initially this made me think that the processing was being carried out on the phone and simply transmitted to the device.  As I progressed through the six day holiday though I was frequently in areas where there was little or even no mobile broadband connection.  In these instances the band would not receive a notification from the phone.  Even if the phone did highlight a notification it was not transmitted to the band.

This led me to test what was happening and arrive at the conclusion that any notification on the band appears to be first transmitted to a third party (Microsoft in this case) for processing before it is sent back and loaded to the band.  This seems a bit unusual to me and also a tad worrying as there is not an indication that this is the action taken or how (if) this data transmission is secured in any way.  With the ability to have facebook notifications, messages, calendar data, etc. sent through there is quite the potential for data hijacking in my opinion.  I will be happy for someone to correct me on this though.

Overall the single best thign to date for the band is that it has stopped me looking near my phone for most of the day.  Every notification you would usually get on your phone is loaded to the band.  This means that all those superfluous notifications that you receive every day can quickly be disregarded.  As I am not taking the phone out the chances to distract myself by thinking, 'Oh, I will just have a look at....' are almost reduced to zero.  It has been fantastically liberating ad something I am loathe to give up at the end of the trial period.

For the rest of the review period I am going to be using it to track a number of runs and workouts and will update on how this goes.  Up to now though, other than my concerns about the data security I could not recommend the device highly enough.  I would like to see what the version 2 band bings to the table outside of the design change but don't see much extra that is needed in a wrist based device.

Comments
by gmarkj
Options
Really nice review.
How did you find the fit of the band?
Was the battery life ok for you, or a little but short (as you use the GPS)?
0 Kudos
by Toby
Options

Eager to hear your answers to @gmarkj's questions

Really in depth review @Anonymous Glad you found the band so useful! Thanks for posting

Nice review @Anonymous. Interesting to read these sort of reviews as my husband who vowed they were not for him.... has now got two similar devices. A fitness band and a smartwatch which does everything.

Now he wouldnt be without them

The fit has been spot on.  I thought I would have been a medium but from the sizing chart when printed out a large looked the better option.  The clasp is slid as tight as it can go but this gives a nice, comfortable fit really.

So far the battery has been great.  I have only used the gps a little but it certainly held up as well as my phone usually would on those occassions.  Will try it more this week.  From first charge it lasted through a whole week of use (not at night times though).  I charged it on the Thursday and the battery finally gave up the following Thursday which seems very good to me.  Much better than having to charge each day.

0 Kudos
by Anonymous
Options
I have been the same, looking forward to trying one but not really seeing how it could be of much utility!

One week later and it's making me wonder what I will do without it!!
0 Kudos
by gmarkj
Options
I had the medium, and I think I might have been better with a large (not boasting, obviously...) as it was secured using the last buckle as it were.
When I was using it it was on 24 hours, tracking sleep as well as activity, and it only lasted a couple of days. This (as well as the price) was the main thing that put me off when I looked at buying a tracker. If the battery lasted more than a week then I would have been tempted even at that price.
I do wonder how it would compare to a Band 2 (...hint hint @Toby!)
1 Kudo