Wow. It's orange. That's bright. "I wouldn't lose that in my handbag" said my wife. 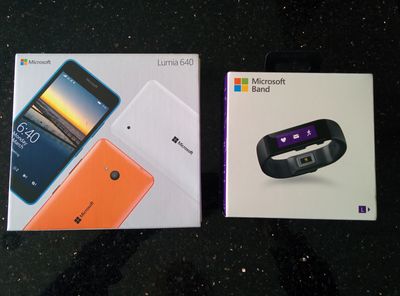 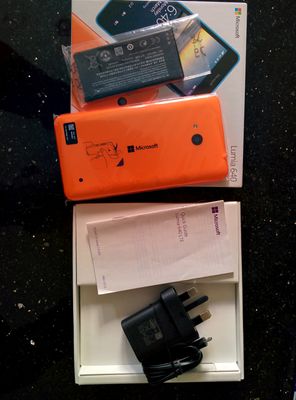 So I asked her to set the phone up. The first problem was getting the back off because there doesn't seem to be a gap between the front and back to get a fingernail in. Managed to get this eventually but getting the SIM card the right way round was awkward as well, until she saw the symbol.

Then it is a case of plugging in the phone, seeing it has around 65% battery and setting it up there and then.

The keyboard is a difficult as the standard Google one because you have to toggle between letters and numbers and special characters.

Once connected to the Wi-Fi, and after setting the correct time and date the phone enforces an update to 8.1. That takes a little while as it has to update all the apps to fit.

Out of the box, the home screen spreads over two vertical pages, with fitbit but not Microsoft Health.  There are tiles for Lumia help + tips (does a real man need instructions?) and for "Get started".  Must have a look at them some time. 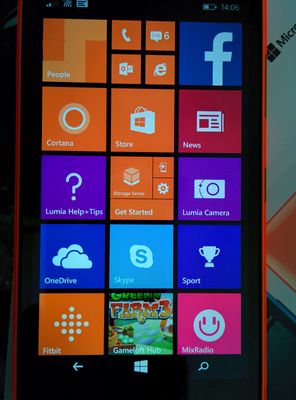 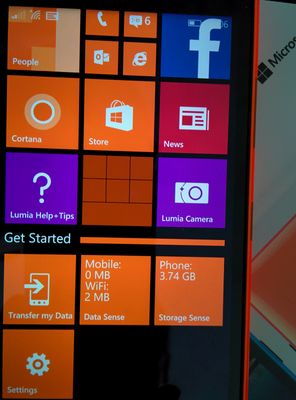 Magnetic connector for charging. Wow, why don't they all do this? So much easier than my wife's Garmin which has a click in holder that has to be just right to connect.  It switches on and asks to confirm English.

Damn. She set it as English US. Now how do I sort that out? That appears to be all it wants.

She's given up as the band is much too loose on her wrist, flopping about all over the place.

Back to the phone, and installed Microsoft Health which asks for height and weight filling in everything else from my Microsoft account. Then open Health, switch Bluetooth on and it goes through pairing with the band. find an update which have to be copied across to the band which has now been rebooted

"Your band is good to go" 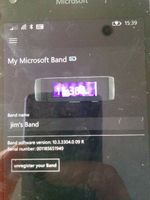 Sadly that is only the update. Almost there! it says on the band, whilst the app is now getting me all set up. Then the phone screen went dark, leaving only the time and date.  The phone screen timed out and went to sleep! When brought to life "something went wrong". Reopen the app and it continues, soon getting set up fully.

The band is only just small enough for me, a 6 foot bloke. Must be the office jobs I've always worked at, give you thin wrists. Maybe I need to work out first?   Now I understand the comments that have been made and the reason that the 2nd version is more shaped and flexible (according to the recent launch video).

MY WIFE HAS JUST POINTED OUT THAT THE BAND IS A LARGE! I'd never known it came in sizes.  Sadly I think some of the later results it has given me will be affected by the loose fit.

It is a strange feeling having not worn a watch for 5 years. With the display on the outside of my wrist I'm already getting a crick in my neck, but then I suppose my ability to read sideways and upside down will come into its own once set up and on the go.  I've unclipped, spun it round and now wear it facing inwards.  That seems to be the best way to go (and later when I look up instructions, it is the way it must be for the golf app to work).

Found the O2 app section, so installed My O2. I wish Roboform would fill in the app sign ons, like it sometimes does in Android, but I suppose it is only the once. So how do I flick between apps to get my O2 sign in and password? I seem to remember you flick from somewhere. The top? No, that tells me from the bottom. No that reminds me that I should flick up from the bottom. That is what I am doing that gives me this message, you stupid phone.  Eventually I realise that this is merely to show the navigation keys.  One flick and they show, another flick and they disappear.

Ok, so it's press and hold the back key to get a carousel of the phone's running apps.  Don't really like this display, as I can only see one app at a time.  Well, at least it is quite quick, easy to scroll through and open or close a particular app.  Now that I have a few apps on there, I am struck by the vibrance of the screen.

I do like the copy and paste, it works so much better than Android. Even the selection toggles seem to work. Double tapping to select a word fits with double left clicking on the pc that I've been doing for years.

I can swipe up from the numbers key to touch the @, and then the letters are shown again. Nicely done.  UPDATE THURSDAY.  I am no longer sure about this.  It seems that a single tap selects a word by default, and it is xxxx dificult to select a space to add a word that you missed out.  I have found a frequent need to do that because I am used to swiping quickly and not needing to check what is typed; the Microsoft word recognition is very good, but not the same, and often it seems to drop words or decide two swipes were one word.

Talking of double tap, great way to bring the phone to life.

I've now set up the O2 app.  Bother, I'd forgotten that my MyO2 sign on is for my contract phone, so it doesn't cover this one. And you can't get contract and payg on the same MyO2.  Never mind, send a text saying "balance" to 20202 and it confirms my PAYG SIM usage and balance.

Whilst swapping between apps, copying and pasting from Roboform, I've pressed back a couple of times and the phone is now just showing "resuming...".   It's confused my poor Roboform which I've had to close. It reopened ok.

I actually looked behind the tile showing help +tips, which led me to songs on the go, which made me look at data roaming.

There is an update to the User Guide, only 5MB so that is another download.

There are now two notifications vying for my attention.

Back to settings. Let's try to set quiet times. It has launched Cortana who wants to to know what to call me. Er, I've done all this on my windows 10 laptop, signed in to my Microsoft account, so why can't she remember me? Turns out she is responsible for quiet times and a whole lot more.

Opened OneDrive. It quickly loads thumbnails of all my files; I've used it from my PC before.

Opened OneNote. It syncs to my OneDrive, including the note I've started on my Android phone about the 640 LTE.

Yep, it syncs. Strangely, now typing on OneNote in the Lumia, the keyboard is completely different to what it was outside of OneNote. Ah ha! It seems to be because I've now enabled Cortana. There isn't a Cortana emoticon, and when I ask her she hasn't thought about it.  I'd put an emoticon in here, but lithium forum software has dreadful ones.  I would be embarassed to use them; they haven't improved since I first saw them years ago.

In OneNote on windows phone I think I prefer the action icons at the bottom, where they are easier to reach than in android.

I thought I might include a screenshot, and was prompted to install Office Lens. Brilliant app, I've used it on my Nexus 5. I'm going to run out of space; this phone is a measly 8GB.  Or I'll have to repurpose a micro SD card from my camera.

Oh I do love the double tap to select. I swiped a word wrongly, and normally have to go back, curse because the word I wanted wasn't there, then delete and rewrite. I see that when I select a word, it then gives me a wider selection of alternate words to use. Utterly brilliant.

Too tall. I'm having to stretch to reach the letters.

My preferred SwiftKey has a number row,   an arrow row and long presses for the most used symbols. Just wonderful.

Continued to install and update stuff

Here maps needed me to log in as I had set it up with an account that wasn't Microsoft.

It has updates to install so I'm back on the Nexus tyoing this review. Ye gods and little fishes. I'd forgotten (again) how I hate the standard Google keyboard.

*** I need to find a Microsoft Windows phone keyboard to match or exceed SwiftKey. On Windows mobile 6.5, I had it with the then HTC HD2 sense keyboard. Still unbeaten.

Back to the 640 LTE. I LOVE THAT DOUBLE TAP TO WAKE THE PHONE!

I tried to go for a walk to test the band, but it started hoying it down with rain. Not fun, so I gave up on that idea. Could I get my anorak off whilst wearing the band? No. It's just too big. I had to remove the band first.

Then it stopped raining, so I went out. 5.36km in 1h 07, with stops for photographs. In the dark. Unfortunately about as far out as I got, it rained so I had to hide the phone and take an occasional photo between showers.

I've got the data back into Microsoft Health, so I can look at that later.

I had thought that syncing things would be easy, but it doesn't quite work like that. I've got Windows 10, but it had problems with OneDrive early on, and most of my folders became detached from me as owner. Currently OneNote 2007 is telling me I haven't synced for 111 days and cannot do so now. Sorted - sub folders had lost my ownership, which I have now recovered.

Luckily the modern app for OneNote does sync to the new stuff, but it cannot seem to see the old OneNotes that are in my OneDrive.

At this point I threw in the towel and went to bed.  Later I discovered that my full version of OneNote 2007 is obsolete, and has a different format to later ones.  The OneNote app cannot read them - you need a full version of OneNote 2010 or 2016 to open and convert them.  Pah! The free Evernote has just opened them perfectly easily and converted them beautifully.  Microsoft need to get real, and include a converter for free without the fuss of having to install a trial version, convert everything and uninstall it.

I made the mistake of using formatting in my OneNote notes - so when I copied them in here, it just went haywire.  The first time I tried, I got about half way through editing what I had input, and when I tried a preview, and it just stopped responding, told me

Bxxxxxy Lithium forums software.  Back to the drawing board, try again another day.

Microsoft Lumia 640 LTE.  Lovely feel, great screen in terms of size and looks; the content really shines.  Seems quick and smooth.  Missing an app I do use, but there is an alternative.

Microsoft Band v1.  Clunky, chunky, but bright display, seems pretty intuitive. Easy to use and tracked me well. On day One I am already looking at steps taken!