My shiny new Pixel 3 XL arrived yesterday (1st Nov) and it is simply the best phone I have had yet and I have been through quite a few since I got my first "brick" back in 1992-93!

First, kudos for keeping me informed about delivery. I had three emails, the first saying it was due in 3-5 days, this was followed on the day by another email saying between 6am and 10pm and then a final one shortly after that giving me a hour slot when it would arrive. It did as promised - I love it when things like that just work.

Opening the box was a nice surprise when you see that all the cables required were included, no extras to try and find when all you want to do is get playing! This included the USB adapter, cable, power plug and headphones. The phones I deal with at work from a certain fruit place didn't have a power plug

Here is a picture showing the goodness. 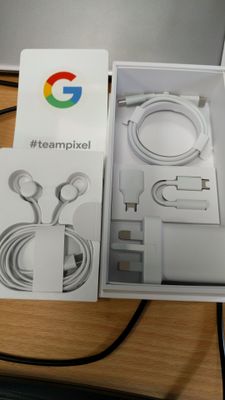 The setup of the Pixel was also the easiest I have come across, a lot of work has obviously gone into making the transition from your old phone to the new one very smooth and pain free. I had already written down the apps that I use and would need to reinstall on the Pixel but after plugging in the old phone to the new I found that my apps where already on the new phone and were being downloaded for me. I did find though that my WhatsApp messages didn't come across but to me that is not a problem as my contacts, Gmail, photos, text messages all did which are more important to me.

I was also impressed that my wi-fi details where copied across so I didn't have to re-enter the log-in details and It Just Worked!

There is loads that is great about this new phone, the new version of Android that the Pixel comes with is slick and useful and well thought out.

I thought having a bigger screen would mean a bigger device and was worried that it would be more likely to fall out of my pocket or not even fit safely in my pocket. However, at least as far as my old phone goes, the Nexus 6P, it is no bigger but because the bevel is a lot smaller on the Pixel 3 you get more screen in the same size device. I love this! Additionally the finger print unlock works really well, I also avoided it before as I found them hit and miss but the sensor on the Pixel 3 works flawlessly, even if I don't hold my finger in exactly the right place each time. Nice not to have to enter a PIN or swipe a shape on screen, although, of course there is a PIN option I have used and works as normal. All good!

The biggest plus about this Pixel3 is the wireless charging - this is simply brilliant as all you do is put your phone on a suitable Qi charger pad (you have to buy this seperately) and it charges! No more routing about for that cable. Even if you do choose to use the cable it is the new USB C type which doesn't matter which way you plug it in, as this is something I got frustrated with with the old style USB as you never plugged it in the right way first time.

Lovely review @EdJones, it seems like a great phone!

0 Kudos
by Glory1
Options
Good review @EdJones. Sounds like a superb, user-friendly phone that takes the bother out of setting up a new phone. Continue to enjoy your new phone.
0 Kudos
by Cleoriff
Options

Thanks for reviewing the phone. It made for interesting reading. What do you think of the camera?

Hi @Cleoriff the camera by itself is still great, takes nice crisp images, pretty much like my previous phone. What I do like at least from a fun point of view is the extras in the software. If you go to Playground mode in the camera you can add characters directly into your room, here is a stil from R2D2 rolling around making noises. 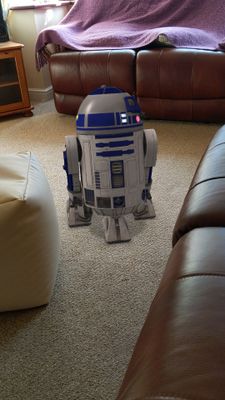 Fun if you have a flat surface, but if you try and get the character to go on uneven surface the app can get confused and you end up with the character floating in mid air! Also you can add multiple characters but they don't seem to be aware of each other and their shapes can blend into one another. Maybe a future update will improve their awareness of others around.

On a more useful level, Google Lens is now built in so you don't need a separate app. This means that you can point your camera at something and if Lens can recognise it, it will give you shopping suggestions on where to buy the item.

I see there is a slow motion option and a photosphere options but I haven't played with them yet!

I'm useless with cameras...being the point and shoot type of person.

I hope you carry on enjoying your phone.

Great review @EdJones! Thanks so much for taking the time to share your thoughts on the Google Pixel 3 XL!