Life on the road - with an Xperia XZ

There are two aspects to my professional life – the contactless media and the media communications.  You’ve already read the previous review looking at the contactless side of the Xperia XZ.  I didn’t tell you much about the camera or its software powers though.  So, without further ado, without a letter and without so much as a how are you – here is my review of the Sony Xperia XZ as a media business tool.

Lets start with the rear camera – a 23MP camera with a flash.  It’s incredibly competent and can be managed easily through the on-board software.  The software is very simple and standard I would expect to Sony Xperia phones.

The processor is powerful – a Snapdragon 820 Quad Core processor running at 2.2GHz and 3GB RAM.  Doesn’t sound like a lot of RAM unless you know that a phone doesn’t need much to run the software.

Then there is the space – 32GB of storage space and capable of using a 256GB SD Micro card.

Connectivity – it has 4G, Wifi, Bluetooth, NFC, GPS – all you ever need – as well as USB C, meaning that file transfer using the cable is quick.

Why is this all important?  Let me explain…

I had a trade show coming up for a publication line that looks at mobility devices.  I needed to be able to take photos and video, shoot for Facebook Live and Periscope, manage Facebook Pages in real time and get information off the phone and into the website.  Time was going to be of the essence.  The show ran for three days, which is demanding.  To cap it off, my usual car was in the garage and my replacement didn’t have sat nav.

I needed a device that could deliver and usually this would mean turning to my trusty Microsoft Lumia 950 – except here lay a problem.  Facebook Pages Manager is not available for Windows Mobile and Periscope doesn’t stream through Windows 10 Mobile.  Since it was with me, the obvious alternative became the Sony Xperia XZ.

I installed quite a few, including the Facebook Pages Manager, Twitter, Outlook, Word, OneNote, Excel, Adobe Photoshop, Adobe Premiere, NXP TagWriter and TagoInfo, Onedrive, EventBrite, Google Analytics, SJCAM, Google Maps, O2Home… the list grew as I discovered various apps I would need.  I feared for the phone, as when running a lot of Apps on another android mobile, it would slow down.  None the less, I wasn’t deterred – I had a lot to do in two days at the NEC.

I set off, using a pre-downloaded area of the UK on Google Maps to plan my route.  The phone kept me alert to traffic problems, sending me from Essex to Birmingham via the M11, A14, M6 rather than the M25 and M1/M6.  I was pleased about this – I had no cruise control either.

The phone held its power well and meant that when I got to the NEC, it hadn’t lost more than 40% charge and I could plug it in to my power pack for a top up.

Straight in, I was immediately required to take photos of a new product – a wheelchair that was new to the UK market.  Photos taken of that and a few others on the stand, it was then on to Facebook Live for a video of the stand before we switched over to Periscope for a video of the launch.

Next stop was to see a Segway wheelchair, something that has been on the market for a couple of years.  A discussion with the marketing manager meant OneNote and the camera were both called on.  I NFC’d my business card into his Samsung. 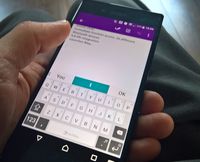 Into a seminar next and I was live-tweeting whilst taking notes in OneNote.  The battery was still holding up.

Another meeting with a solution provider, more photos and an email reminder sent.  My Outlook Calendar reminded me of another meeting due so I went on to that after.  Further photos and a video were taken.  We considered downloading the Electric Wheelchair’s control app to the Sony and decided there wasn’t time to do a demo and pairing today.

Another seminar, more live tweeting and a photo.  Some notes taken in OneNote again.  Afterwards I edited the video from earlier in the Adobe Clip app.

End of the day, hungry and tired, I got in the car, set the satnav for a local friends house, I went to my overnight stay.  The phone had 29% charge.  Did I mention the sporadic calls in the day?  It coped with those too.

When I arrived at my friend’s house, I put the phone on the Wifi and uploaded my photos to OneDrive.  The phone Album App worked perfectly, uploading all the photos and video to the Cloud. It didn't had a single pause, either. 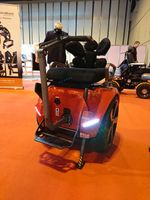 Setting off, I had a colleague with me and the FauxPro set up in the car.  My colleague used a dedicated App in the phone, connected it to the camera and viola - we undertook a video interview as I drove.  A discussion, if you like, about what our aims of the day were.  Arriving reasonably on time, today had a different aim, requiring a lot of posed photographs to be taken.  Using the camera and the flash, I knew the battery was going to take the brunt of the hard work.

I took photos of about 5 wheelchairs, each with 15 pictures – a mixture of flash and no flash.  The phone didn’t lag behind at any point.  The processor handled some quick edits in Photoshop (Lightroom) and then accepted the save and transfer to the Facebook Pages Manager.  A brief interlude in my day (a rest stop at a bed manufacturer stand) meant I could do a brief periscope to Twitter followers.

The publication website also required some photos uploading, so these went online next – the Chrome browser capable and managing well.  At this point I checked the open apps list – Facebook Pages Manager, Twitter, Facebook, Facebook Messenger, Phone, Outlook, Adobe Clip and Adobe Lightroom were all open.  I couldn’t tell, as the phone kept on going – no lag evident.  I closed a few off anyway, because it is habit.

Meetings next and OneNote in use – I also had my Lumia 950 open with OneNote as well – it synced to the Xperia XZ but I didn’t feel like I needed it there.  The Sony was managing well. 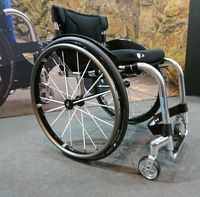 Day 2 finished, the show closed and I sat in the car park sending a write up to a colleague for publication.  The phone had 25% battery and I knew my route home.  I drove back, taking the occasional call hands free but not plugging the phone in.  I arrived home with 20% battery in the phone, 5% in me.

What would I have done differently?  I learnt quickly that I needed to manage my lighting aspirations better – that was me, less the phone.  The photo has a metal back and plastic case and if I had this phone as my own device, I’d be protecting it with the appropriate cover.  I’d also like to investigate a camera stabilisation kit for shooting video.  My video came out ok… I wanted it to come out perfect, though. It's my fault, not the phone.

For everyday use in the business, my Lumia 950 does the job.  A Samsung would do the job, as would an iPhone or HTC. However, for two days I demanded excellent.  It was my reputation and first impression that counted to many professionals.

It didn’t matter how the phone looked – it mattered how it delivered.  It ran without gitter or complaint, loading the camera software quickly, allowing the flash to recharge in ample time and switching between applications with ease.  Much of this is down to the Android software – Sony have enabled it to run efficiently with this phone though.

I’ve attended such events in the past using just my Microsoft Lumia 950.  I wasn’t anticipating that the Sony would be the only device I used.  In the end though, it became clear that it was the only device I needed – nay, wanted to use.

I confess I have fallen in love with a non-Microsoft device.  I don’t even want to return it, where as normally I say that but happily send it back.  Instead I’ve got to wait another 10 months for my contract to refresh before I can order one through my business contract.  It’s going to be a very long 10 months.

I like Sony devices, and if this was about when I was upgrading then it would have been a contender.

How did you find the screen compared to the Lumia? Having seen and used a Quad HD (1440x2560) a Full HD (1080x1920) seems to lack detail/clarity for some tasks - for instance using a Kindle app on a Quad screen seems (to me) easier to read.

Daddydoink
Level 15: Gaining a Reputation
Registered: 17-07-2014
I have to say, being out on the road for work, it made no difference. I needed to work and the Xperia did it - reliably and easily. It was some days of requiring a device to be my note pad and eyes, which it did without fuss.
0 Kudos

@Daddydoink Great review. It sounds like the Xperia XZ really stood up to the demands of a few intense working days!