As many of you know, I sometimes receive a letter.  Now, letters are these things before emails and I received such a letter from a Mr Fen-Sing from South Wales.  It read as follows:

My children keep complaining at me that the trains to the big city that is London offers wifi but my car, or indeed, I, doesn't.  They tell me the wifi should be free for them to use and they don't care what it costs me to do it.
My colleagues want to access files when out and about as well and they nag worse than the six year old on a school run.

Can you please recommend me a single solution that doesn't involve a big wire out of my trouser pocket like BT suggested.

It's a bit difficult to say no to a letter like this - so I took on his challenge forthwith...

The Huawei Pocket Hotspot Plus is a premium 4G device aimed at businesses more than the home user.  It offers multiple devices the wifi whilst enabling you to monitor your use, extend your existing wifi and even expand with USB and MicroSD.  It charges with MicroUSB and comes with a nifty cable and plug, which is always appreciated.  Unless of course your main phone uses USB-C...

The box itself is self-contained to a point - two buttons on the "back" turn it on and activate WPS.  The power button then becomes a "press and reveal the wifi passport" or hold it in to turn it off.  There is a small nifty white-lcd screen, displaying the amount of data used on the screen as well as the connectivity status and the number of text messages (SMS) in the in-box.

Between the two buttons is a cover which reveals the charging point, ethernet socket and usb socket.  The USB will also charge a phone or tablet - handy if you run out of power sometimes - and even proudly boasts a 5200mAh battery to cater for this.  The box is small enough to fit in the palm of your hand, pocket or anywhere else Mr Fen-Sing wants to keep it.

Under the back panel, you will find a Micro SD card slot and a full sized sim unit - great for those of us who might be upgrading from a USB modem.

Very helpfully this device has a web interface.  Once you have set it up for the first time and configured your password, it is very much akin to a typical home router, enabling you to connect it as a bridge to other wifi networks and therefore never seeming to have to switch networks - move out of range of the home wifi and the 4G takes the strain.

The rest of the device is straight forward and most people won't want to touch some of the more advanced options.  However, if your children are a little free and easy with the wifi code, you can lock things down to the MAC address or change the wifi code and press the ever in-secure WPS button.

The Router also allows you to map ports, allow access to the internal web server and act like your standard router at home.  It has a web panel for managing the USB storage, which means you can set up folders and share them around - handy when away for work, if you want to back up things (attaching a big USB and then backing up edited video from two laptops at once was a personal experience).  The only complaint is the large images used within the admin interface, which slows it down a bit.

Other nifty bits include the fantastic wrist strap which unclips to become a USB Micro cable - one of the best additions to a device I have seen in a while - and the nice subtle design which gives the device a quality look and feel.

This is all well and good - it functions as a broadband router, which sorts the little people out...  what about the colleagues?

Connecting to the internet as a redundancy device
If you work in locations where the internet is unreliable, this device can act as a redundancy device.  The LAN can connect using PPPoA (for broadband) to a Highspeed VDSL (infinity-style) or Cable modem, using a username and password if required.  Because of it's default to cable or wifi-extender before using the mobile network, it can offer an automatic switching if the internet is down. Be aware that using it as a wifi-extender counts as "one user" in its connectivity limit.
Connecting to the internet using the device as a standalone router
You can connect to the internet with this device using USB to a computer (which installs itself as network adapter), LAN (using the auto sense tool) or the wifi.  Each time a device is connected, this will act as "one user" out of the ten user limit.
Accessing the storage
This can only be done through the Hauwei Applink program or web interface.  You can't access files through Windows Explorer directly as you might normally do with traditional Network Attached Storage.  Minus one for the router here.

What about the bits for me, like...
Accessing the Text Message Inbox
You can access the text message inbox through the web interface portal.  To do this, you'll need to log on to the IP address noted in the back of the rear cover label, using the username and password.  You normally will only get texts from O2 advising on things such as nearing limits or to top up, if using a PAYG data SIM.
Changing the default password
This is completed quite easily, logging on as above and using the "System" menu.  Click on System > Modify Password to do this.

Conclusion
Its hard to write war and peace about a device that appears as simple in its functions as a kettle.  It will get you online and enable a wifi network easily, with all the information you need at a glance.  Compared to other devices, the external screen telling you simple things like 3G/4G, data used and connectivity status makes this device worth the extra already.

It's business benefits come along with the USB or Micro-SD filesharing, the redundancy build for in-office (especially if you are used to the fixed line broadband going down regularly) and the multitudes of connectivity.  It's a very capable device for the price.

My favourite bit though - is this button on the Home screen for the device: 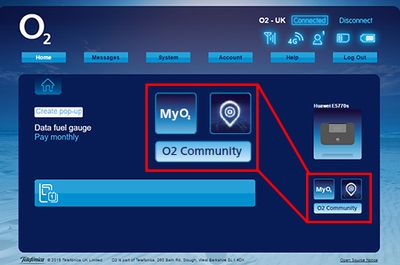 Lovely job @Daddydoink! I like the community button on the home screen too. Good spot

Thanks all for the comments