That should be called Longevity Re-Defined @jonsie. What a poor show from O2....Take away Tu...then take away the only two useful features of O2 Ask....in such a short time

I'd say unbelievable @Cleoriff, @jonsie but with O2 lately it's becoming all too believable. Poor show is putting it mildly.
Lover of all things Samsung. Currently using Samsung Galaxy S10 Plus 128gb

Penty of time to edit this before he 8/8th....although by then O2 Ask may be withdrawn altogether.I just find the app pointless now.

This App was never officially announced, we just heard about it via someone posting. It doesn't even appear in the section under apps on the top screen forum header.

I always thought that was weird and now I know why.

It was always going to be a temporary fix intended to placate the 1000's of customers who used and lost Tu...

So once they thought we had accepted it, O2 then pull this one. Good job O2. Looking after your customers?

Ummm.......that's not a question I would ask (pardon the pun) @Anonymous. It may give them ideas 🤨
Lover of all things Samsung. Currently using Samsung Galaxy S10 Plus 128gb

hi. last night i got the android oreo update for my galaxy A5 (2017) it has installed wifi calling. open the dialer, tap the 3 dots on the top right, scroll down and turn on wifi calling (you have to have it turned on on your account) 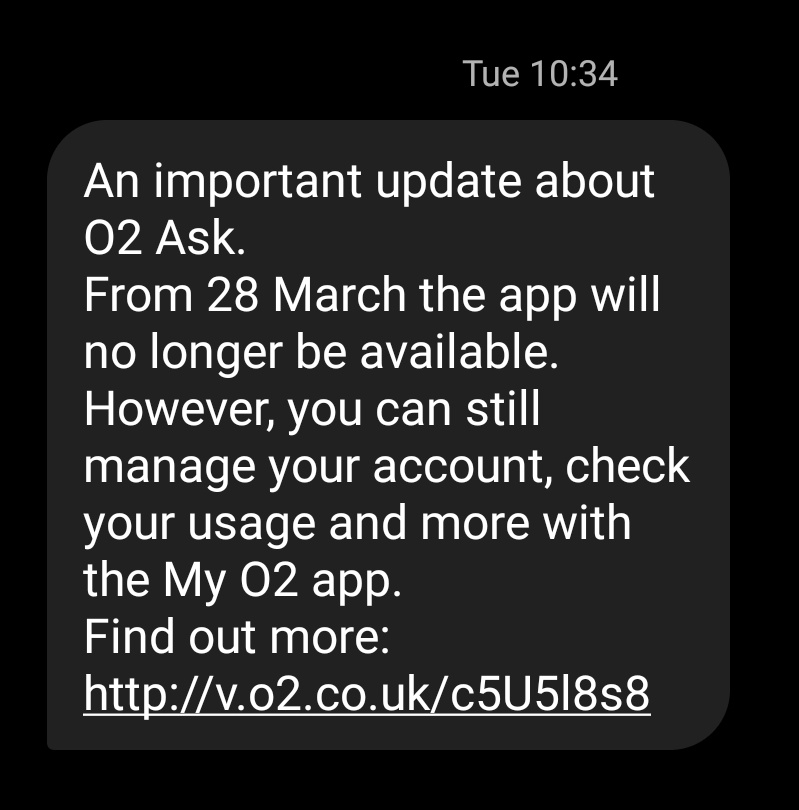 An important update about O2 Ask.
From 28 March the app will no longer be available.
However, you can still manage your account, check your usage and more with the My O2 app.
Find out more: http://v.o2.co.uk/c5U5l8s8

We knew this a few days ago. Admin put out a thread about it plus I’ve had the text & email
Report Content
Message 89 of 91 (440 Views)
Reply
1 Kudo
Highlighted

Ive had the text and yet another O2 disaster is consigned to history.

I have always advocated that once they removed wifi calling and texts, that it was just a mini My O2.