US evangelist Billy Graham - one of the most influential preachers of the 20th Century - has died aged 99.

Graham became one of the best-known promoters of Christianity, beginning his worldwide mission in large arenas in London in 1954.

He died at his home in Montreat, North Carolina, a spokesman for the Billy Graham Evangelistic Association said.

In a 60-year career, he is estimated to have personally preached to 210 million people. 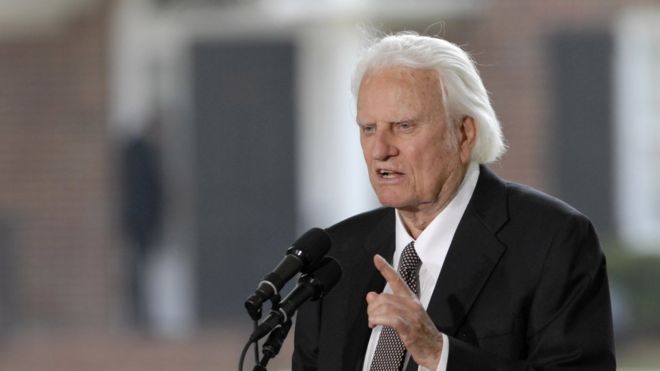 He used to scare the crap out of me and seemed to me to incite the KKK around that time. I'm sure he had his good points but fire and brimstone preaching and preying on the gullible made him hateful in my eyes.

I know very little about him, though I have heard soundbites of his fiery speeches. He does appear to have had a profound effect on many.

Messages of condolence have been posted by The Archbishop of Canterbury, Barack Obama and Rev Jesse Jackson..

You might not have liked him, thats up to you,

He had nothing at all to do with the KKK in anyway, shape or form.

Wasn't a fan of the man tbh or his form of preaching. But he was indeed influential in his day which was not necessarily a good thing.

And @Skyhawk1010 while he was not associated with the KKK in any way he was used by them as an example of a great preacher. And I don't recall him as ever preaching against them.

He was an old fashioned southener which was and is someone I've great difficulty in liking for so many reasons. Funnily enough, my dad who was from Atlanta, Georgia and mixed race, was a follower and went to hear him preach. Never did understand that.

However, I am sorry to hear of his death. Love him or hate him he was a good man who truly believed what he preached, unlike many of the preachers of his day.

You need to be of a certain age 😂