Name the chicks in Blunderland

The Mad Hatter [ @Cleoriff ] said we should just number them; and the Queen of Hearts [ @Glory1 ] said she didn`t mind feeding them but she wasn`t going to name them.

The Dormouse [ @Mi-Amigo ] thinks the chicks should have names.

There are 87 chicks to name. So what names do you think we should give to these 87 lovely chicks?

[Here are some of them 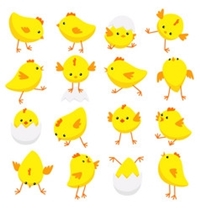 The Dormouse suggests that, as many in Blunderland are Beatles` fans, four of them should be named -

That leaves 83 chicks to name. So over to you. What names to do you want to give to our lovely chicks?

I know I've chosen a lot but I have a few cats you could name some after?

PS, I only have two of the above cats left now by the way...

Discount these then @Mi-Amigo. We now have more names than chicks

I am the Meerkat

I shall happily, then, stick with my chick Goldie

The meerkat is a member of the mongoose family - Rikki Tikki Tavi, @MI5?

All the chicks in Blunderland have now been named [although we are waiting for actual name of one].

Thanks everyone. The Lion wished us well naming all 87 and we`ve done it.

The chicks are [in order named]:

Radio; Caroline; Gary and Holton of Heavy Metal Kids [by The Dormouse] = 4 chicks

Alice will NOT be doing roll-call in the morning.....

Neither will I. No need for roll calls anyway, as long as they are safe from foxes and birds of prey...said the Mad Hatter

Neither will I. No need for roll calls anyway, as long as they are safe from foxes and birds of prey...said the Mad Hatter

And meerkats or mongooses... mongeese?

No need for Alice nor the Mad Hatter to do the morning call. The Dormouse and Queen of Hearts will feed the 87 chicks and if there is any name call to be done, then we`ll do it.