In the Spotlight: Viridis

Time for another spotlight and this week we have someone that makes us laugh a lot in the community.

We asked him to say a little bit about himself and he has replied to all of your questions so make sure to say hello. 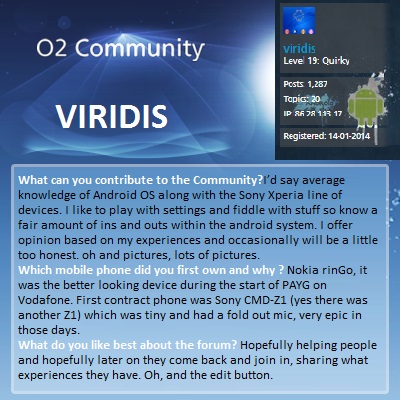 And more about him below:

What is the airspeed velocity of an unladen sparrow?

As stated, It's a SWALLOW and your blaspheme has been noted.

How many pink jellybabies does the Earth rotate upside down in case a hillbilly
swims over a rainbow trying to win a hobby horse?

None, the pink Jelly baby line was wiped out sometime in the early part of the
21st century when scientists discovered that the colourants used to make them
pink sent kids a bit nuts, thus creating an army of hyperactive teens.

What made you first visit and join the O2 community.

Sadly it was because of lack of information regarding an upgrade from anyone at
O2. Came to complain and found a lot of people who like to help as well as chat and
chill.

What does community mean to you?

Less battery life on my phone, and approximately 250Mb of data I'll never see
again. and I guess sometimes, just sometimes it's rewarding when someone
actually gets their problem sorted because of something i said, or had a giggle
at a pic, or said Wooaaah too far Viridis, too far (remember, edit button)

What is the network coverage like for you in your home and areas of commute?

Absolutely epic, 4G in the entire city and regular speeds of 50Mbps+ Coventry
wins. Although that's probably because it's a dive and everyone left, freeing
up the masts.

Where do you see smartphones in 5 years?

Given that 5 years ago we had low res slow bulky devices.

lol, i was thinking of an iPhone 6+ when i wrote that.

What are your Likes?

Innovation and technical progression are key to the future of all entertainment
and personal tech. I love we live in the age we're in, where we are seeing the
real steps into the true Nano age. I like seeing true help and true charity.

Truthfully, I could fill this. However I will answer the most relevant dislike
I have : the suppression of innovation by means of using courts to prevent others
progressing in the field because they are advancing at a higher rate than
yourself. Not only because of slightest annoyances, but then patenting the most
ridiculous things ever because without such patents your case would collapse
and implode on itself.

If you were CEO of O2 for a day what would you change and why ?

Everyones iData to standard Data, for the lolz.

Italian, with a love of pasta dishes. I love cooking too, quite good at it and
my favourite dish's are risotto's.

What is your favourite all time movie?

Do you untie your shoes when you take them off?

What was your favourite toy as a child?

My collection of hot wheels, had about 100 in the end but never played with
them, just had them on a shelf. My favourite play toy was a Game boy, loved it.
I also had a Nintendo Game and watch Donkey Kong. My mum sold it at a car boot
in the end, about 10 years later I found out it was worth a mint.

You discover your wonderful one-year old child was mixed up at the hospital and
actually isn't yours. Would you exchange the child to correct the mistake?

Nope, a father is not just a biological being, it is one that provides no
matter what, ask any step father the same question, you'll see.

Would you be willing to lie to a court for a close friend if it meant saving
your friend from going to jail for life?

Falsely accused or hands down they did it? If falsely, yeah i'd lie. If they did
do it and it warranted a life sentence, no, it's not like they gonna be round
much to moan is it?

If you could have anyone locked in a room so you could torment them for a day,
who would you choose?

That dude who was really smug selling his bitcoins at $215 a piece and made 3/4
million and told all the worlds press.

And how would you torment them?
I'd show him the price 2 months later.

What dead person would you least like to be haunted by?

Robin Williams, it would remind me he's dead. Truly shocked by that.

If ghosts can walk through walls and glide down stairs, why don't they fall
through the floor?

Considering they're not ON the floor, why would they fall through it?

Which came first Samsung or iPhone?

Neither they're both progressional developments of devices known as
"smartphones" derived from the first smartphone IBM's Simon(google it kids) and
have used various tech from other handsets to create the current form they now
take. Although literally, Samsung has been around since the 1930's and iPhone
since 2007.

Should Creme Brûlée be eaten warm or cold and how hard should you need to hit
it to crack it?

Always warm. And I find anything more than 2.798g of force is enough to break
the crust on a well cooked Brûlée. Anything more than this and the waiter would
be receiving a burnt caramel frisbee to the face.

Below are some of our previous members in the Spotligh. You could be next by getting involved in the community!

If you would like to suggest someone for the spotlight feel free to drop us a PM.

you make me laugh, which is a wonderful thing for a human being to be able to do in this day & age

I know which it was, I answered it.

you make me laugh,

Thank you so much for saying that.

No, that would be weird.

Nurse !!!
I have no affiliation whatsoever with O2 or any subsidiary companies. Comments posted are entirely of my own opinion. This is not Customer Service so we are unable to help with account specific issues.

Pm me the number of the person you used.

You figured out how to get the menu button up yet.

Guys off topic but how do you change the colour of names?
Report Content
Message 10 of 78 (2,771 Views)
Reply