I'm very surprised at Verstappen's words (Orchestrated by Horner and RB no doubt) I can understand him wanting to blame Hamilton for the incident (That's part of the game) But to suggest everybody should be sombre and Mercedes not celebrate a win is utterly ridiculous, it would of course be different if Verstappen had been seriously injured.

Red Bull = Dummy/Toys/Pram! And the dummy is Horner!

Compare Horner of yesterday with Horner in Spain....(Overly delighted at the thought of Max putting Lewis in the fence!!)

“Turn 1 was mega. I mean Max, that was full Max Verstappen – he was just going for it – and he positioned the car fantastically well,” said Horner after the Spanish GP. “He tucked in, he got a little bit of a tow and a bit of momentum. And yeah he just braked later and ran the car wide. Thankfully Lewis had got out of it because otherwise he would have ended up in the fence,” he added.

@Cleoriff Haha, yeah that's about right - hypocritical for sure.

I'm glad that incident happened tbh (With no serious injuries of course) It was about time we saw some real racing, It was mad (but fair) racing right from the lights and both drivers were right on the edge, there were many times either driver could have taken the other one out.

That was the Hamilton of old, not giving an inch.

Verstappen is a great driver but he's shown himself out to be a bit of a baby imo.

Can't wait for the next race.

I see Horner is talking **** again

Horner is very forgetful. He once made the statement about Max 'He's a brilliant driver. He goes for it. I don't mind if he writes the car off as long as he goes for it'.

Him and Marko have never shut up about this accident, conveniently forgettin Mercedes and Williams wrote off their cars when Bottas and Russell collided in Imola. They can both afford to repair their cars. It's a lot of money for Williams.

They are also still considering bringing in lawyers to overturn the stewards penalty on Hamilton.

I actually feel a bit sorry for Max. Surrounded by all the worst people in the world. His nasty wife beating father, Helmut madman Marko and Horner who has never shut up about this accident.

Criticising Mercedes for celebrating Lewis's home win at Silverstone while Max lay in hospital winded with a bruised ego, nothing else.

RBR inciting the most terrible, vile racist abuse towards Hamilton. All because LH decided, after backing out 3 times at races against Verstappen, decided THIS time it wasn't going to happen.

TBF I knew the caps were coming but I didn't realise they were so low, and i've never heard of any team asking for recompense for a crash. Maybe that's the future.. let's face it they've brought in dafter rules before!
Message 466 of 643
127 Views
Share
Reply

It's all so OTT from RB, racing is racing and cars are the safest they have ever been. I mean crying about the cost the accident - Seriously? It's just ridiculous from RB.

Remember this from Monaco? Racing is Racing, stuff happens.

@Cleoriff RedBull have indeed requested a review of the penalty handed to Hamilton at Silverstone, it is to take place on Thursday via video link. They need to provide new evidence (What new evidence could they possibly have I wonder) It seems very unlikely that any extra penalty would be sanctioned.

Yes I've just read it. Apparently their new evidence may include a statement from Max. How relevant that will be is anyone's guess. As he shot into the barrier with a 51G impact, I can't see how he will remember much about anything.

For the review case to go further, Red Bull will need to provide proof that a "significant and relevant" new element has come to light since the accident.

I can't see how anything will happen. The FIA statement said 'car 44 was predominantly at fault' which means car 33 was partially at fault as well.

The joke is, this would NOT be happening had Hamilton not won. Even with a 10 second penalty he smashed it.

Salty Spice is also on the up 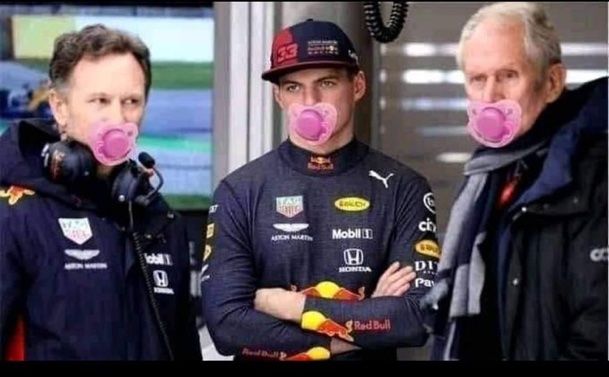