More absolute rubbish. Max has been given a 10 second penalty for braking and causing a crash (with car 44)

What's the point of that? Max was 20 seconds ahead of Bottas so suffered no punishment at all! 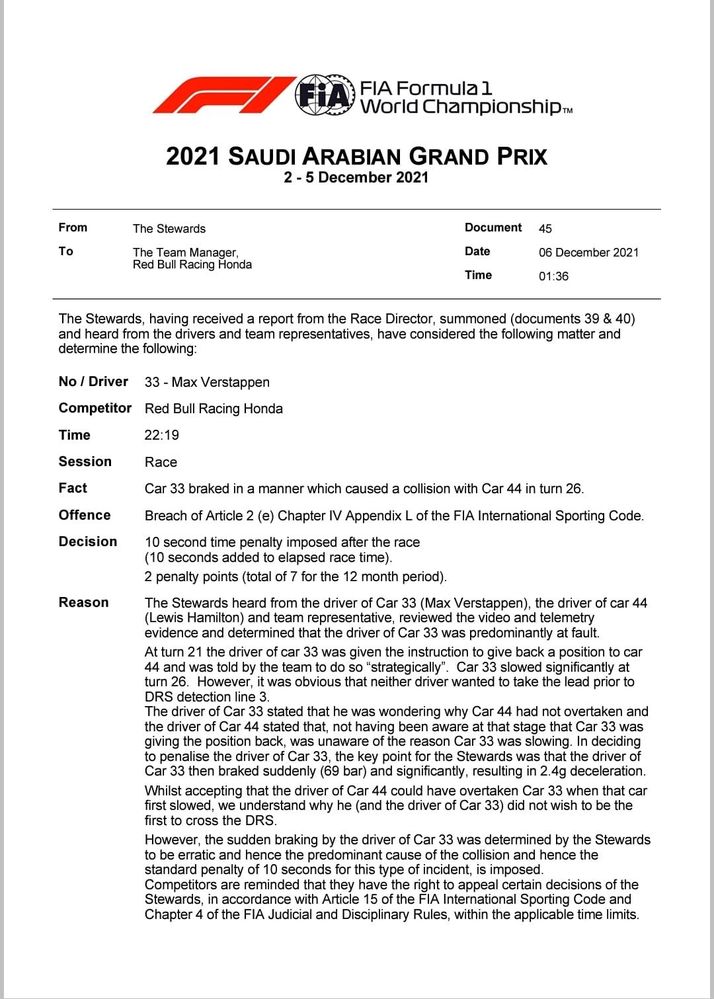 Well, having watched it again on Ch4 I think the whole mess was mostly down to Race Control, Verstappen is a feisty and aggressive driver but he didn't do that much wrong really, I think the 5 second penalty for cutting the corner in front of Hamilton on the first occasion was justified.

The slowing down incident was bizarre from all angles, neither driver really knew what was going on (Total Race Control fault) And the way Hamilton kept slowing more and more behind Verstappen was very odd, he obviously thought there was a problem ahead or a virtual safety car, but you can't blame Verstappen for that. Hamilton should just have overtaken him.

Then the incident where Verstappen gave the place back, then took it straight back, is down to the shoddy F1 rules, I think Hamilton would have done the same, so again you can't blame Verstappen for that either.

The bottom line is; is that the whole thing was utterly confusing, and on a very unique and difficult track.

I blame Race control for the whole mess, they need to be decisive and clear, and communicate properly.

Just to say, the major thing that race control did wrong was telling Max's engineers he had to give the place back BEFORE they told Mercedes what was going on. Lewis had absolutely NO idea why Max was slowing down. He had no radio messages and thought it was a VSC or track litter. No way can LH be blamed for that.  Lewis said Max brake tested him, and the sudden reduction in Max's brakes as shown on the FIA telemetry above, proves he did. That's why he got the additional 10 second penalty. All because Max lost his damn temper ie (I'm slowing down (right in the middle of the track,🙄 sod you, you aren't overtaking so I'll slam my brakes on.!!!)

The other stupid thing was the 10 second penalty AFTER the race had finished and the nearest person to him was 20 seconds away. What sort of punishment was that??

I'm not bothered about him taking the place straight back after he eventually let Hamilton through. He was clever with that, waited until they reached the DRS line, LH goes past and Max opens his DRS and takes place back. Clever.

What he also saw the stewards for was his dangerous driving. The amount of times he took Lewis off track was ridiculous.

As LH said, he has been driving for 28 years and there have been a few drivers who cross the line and Max is up there with them. He also made the point that if Max took them both out, it would suit Max, whereas he (Lewis) can't afford to have a DNF.

Bottom line, the last overtake by Lewis was done by him with no orders from the FIA. GOOD!!

The stewards obviously thought after the hoo haa when Max drove Lewis off the track a few races ago and they let him get away with it, they better not do it again. So the stewarding is rubbish and non consistent.

I mourn the loss of Charlie Whiting.

So the race was a mess and we all know Max has a temper. (Remember when he ran after Ocon a few years ago ready to give him a punch??) He is a true son of his wife beating father.. Walked off the podium yesterday in a big sulking temper.

It's all down to Abu Dhabi now. May the best man win, cleanly without the dirty driving Max often displays.

@Cleoriff Hamilton won the race and got the fastest lap, that's maximum points, Verstappen got a five second penalty and had to give the place back, there is no need for any further penalties imo.

And yes Hamilton did not know what was going on when Verstappen slowed down but how is that Verstappens fault? And why did Hamilton slow anyway? If a car is slowing down or stopping you overtake, it's a race!

Like I said, Hamilton was confused (As we all were) but in any case he should have just overtaken Verstappen. It was like Hamilton suddenly thought he was on a formation lap, very odd imo.

Lewis said he slowed because Max slowed. With so many crashes he wasn't sure whether there was a VSC or track debris. They asked him if he knew why Max had slowed down and he said No he didn't. No point overtaking if a yellow flag was being waved which didn't show on his dashboard. Yes it was weird but when he explained why he didn't overtake, it made perfect sense.  He's been driving for years and of course he wasn't going to  overtake if he thought there was danger on the track or a VSC and risk a penalty!

It made perfect sense to me when he explained it post race. Even before that when you heard Merc shouting at Masi asking if LH  was allowed to overtake and if so could they ask Max to slow down and move aside, not just plant his car in the middle of the road. That's when Masi replied 'Ron I told you, and he said yes, AFTER you told RBR. there was no time for me to get the message to Lewis's engineer.

Anyway no point going over it again. I said yesterday I would have to watch it a second time now I had all the info post race. So I did watch the full race again this morning. (For some reason C4 didn't record the highlights!) Not even on catch up yet! Pfffttt.😂.

Max knew a DNF for Lewis would be to his advantage

Same applies next week too.

A double DNF would suit Verstappen but it's a huge risk as you might only take your own car out, and you would almost certainly receive a penalty.

In a way Hamilton was lucky that his wing was not badly damaged, as he could have been out and DNF, Hamilton was not on the ball with that incident and Mercedes should have been telling him that there might be a chance that Verstappen could be letting him through, surely Mercedes could see what might be happening. But in any case it's up to Hamilton to keep racing till there is a flag or warning, if a car is slowing you overtake it. That's racing.

The 5 second penalty Verstappen got could still cost him the championship (If he loses by 1 point) As it prevented him from going for the fastest lap.

I watched the highlights this morning on YT, and it looked like Max took his foot off the gas when Lewis was right behind him and so had no chance to go round.

With the 5 second penalty, could the stewards not apply it at their discretion - either in the current or next race so it had the most impact?

The 5 seconds was great it was applied during the race @gmarkj. As his tyres were dropping  off, Max hadn't got enough time to stop for new tyres to get the fastest lap so that stayed with Lewis.  It was the 10 seconds which was applied post race which annoyed me. As he was 20 seconds ahead of Bottas, it was pointless.

They won't pass penalty points over to next race. Only grid drops. So he gets away with it.

As Abu |Dhabi next Sunday is the last race and they are on the same points, then whoever wins is WDC. So expect some real dirty tricks from Verstappen. 😡

Even if Max takes himself out with Lewis, he would still win as he has won more races.

He is a dirty racer, people may say he is aggressive and think that's OK but if he wins by dirty moves then he doesn't deserve to be a WDC. That's it. End of.

I don't think Verstappen would intentionally try and take Hamilton out of the race, but he would probably try and cut him off at a corner and maybe cause some damage, but then Rosberg did it to Hamilton on numerous occasions in 2016 to take the Championship, and he was Hamiltons teammate.

A lot of the time it's subjective as to what is acceptable driving, and at the business end of the season with two drivers battling so close for a championship there is bound to be a tough fight and controversy - It's always been that way in F1.

It's a straight race to the line now at Abu Dhabi, and the winner will be the one who finishes in front - Unless they both score the same points (Very unlikely) Then it would be Verstappen's championship.

Barring a disaster, I reckon Hamilton will be Champion on Sunday.