I was on a F1 forum yesterday when it happened (Max swearing at Lewis) Horner was immediately on the radio to say Hey, less of that Max!!  I think he was worried about Netflix. He also wouldn't like it that his team mate was P1. I just remarked, if Lewis had said that, this forum would have lit up!!

Max has been voted driver of the year (a title Lewis has had for past 6 years) In fairness either him or Norris deserves it. Max has made less mistakes than Lewis this year. However he does have a sense of entitlement and that showed in P2. Angry young man!

P3 Cota. Alonso takes a grid penalty for a new engine. Better session although Lewis spent half of it in garage with engineers checking car over. He got P1 but had time deleted due to exceeding track limits! 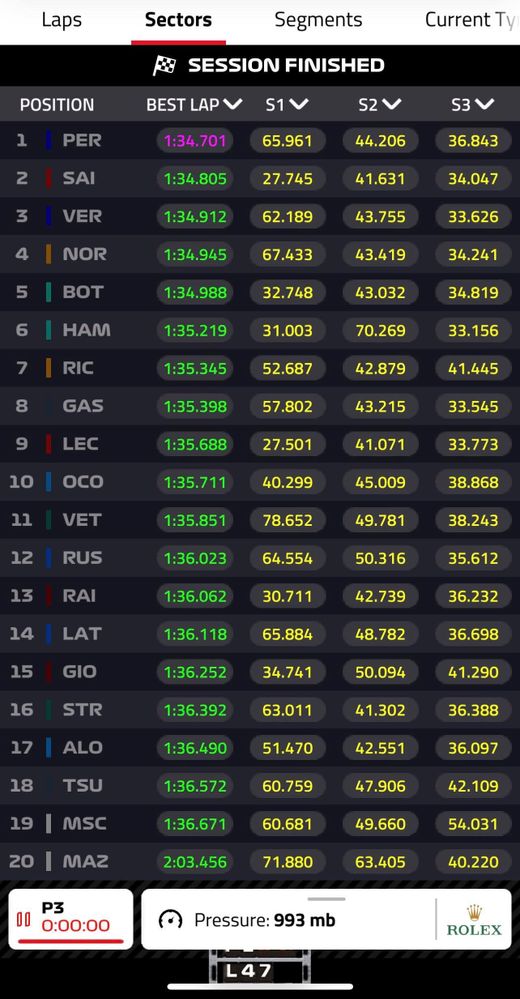 Oh god...for 10 seconds I thought Lewis had pole, then along came Max..Pfffttt! Lol

And three tenths too, it's not just Verstappen look at Perez's time - on a par with Hamilton. Red Bull is faster, and by a margin.

I think Hamilton has to go for it from the start, could be messy 😃

Edit: @Cleoriff I don't understand that timing results screenshot you posted in the above post

There are no lap times and Verstappen is showing a minus -0.898 gap? 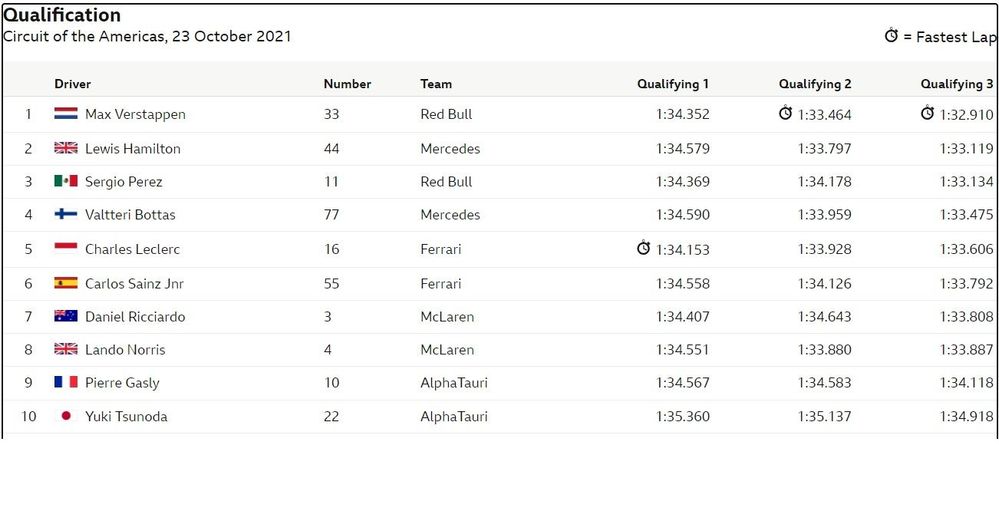 That timing sheet is the one posted on the F1 forum @mm7000gb. Normally I post my own from Motorsport but it wasn't ready. If Perez hadn't had that little mistake, he would have been in 2nd. What I say is, Merc have been accusing of sandbagging for years...I will now say that about Red Bull.

@Cleoriff Yeah, the fastest teams always sandbag, no need to show your hand too early.

I thought Toto Wolf looked like he was caught off guard though, he wasn't expecting that. Verstappen is consistently  finding these fast times but the worry for Mercedes is how fast Perez suddenly is imo.

As you said before it's great to see the huge number of spectators at the track, brilliant!

I'm hoping for real classic, and I hope Hamilton can get the win 👍

Toto didn't even come out to talk to the commentators. He sent James Allison out instead. Silly question... 'So Lewis is up against it 2 to 1...how do you tell him to handle it? Allison: We don't tell him anything *laughs* He's one of the most experienced drivers on the grid, a 7xwdc, we think he knows exactly what to do"

What gets me is these commentators are always asking Rentagob Horner about Merc!! What the hell does he know about them?

It was a very close race, Hamilton did a great job to chase Verstappen down, but ultimately Verstappen had enough left in the tyres to stay in front.

They were 40+ seconds ahead of perez in 3rd, in a race with no incidents that's an incredible statistic really.

May as well give the championship to Verstappen now! So sad that Lewis couldn't do it. I really thought  he would...but as they say catching is one thing, overtaking is another.

Mexico is historically a Red Bull track, so because I'm feeling down about today, I can't see Lewis doing anything there. Also what the hell was Bottas playing at? Took him ages to to pass Sainz and he had a broken wing.  Waste of space unless he is leading.

There's every chance that Lewis will have to take another ICE as well.

12 points in it, 5 races to go and with a possible maximum 130 points left to race for.

Red Bull have the edge (imo) But I wonder if Mercedes can turn up the power for the end of the season, I fancy Mercedes more than Red Bull for reliability.