Recent Trip to London and O2 Coverage wise on train down

So as most of you will know, I enjoy doing speedtests and checking out how good network compares with each other.

So on a recent trip to London, I took with me my iPhone X and iPhone 7.

The Train that I was on was one of the old style trains, that don't affect the Signal too much, so I knew I could get pretty decent readings while on that. The Speed test was ran at the same time and I would run at least 2 and on some occasions If I got a failure I would run it 3 times just to be fair.

The results are as shown but as you can see O2 are in desperate need of some extra capacity especially in London it self.  Market Harborough is where O2 won on Both Occasions.

One thing that I did notice was that EE and O2 matched each other second for second with 4G access.  Apart from the tunnels. I got 4G on both phones 99% of the time, both phones went to 3G in the same part as well (Rural Country side) and then 10 seconds later both came back to 4G at the same time.

So Top Marks to O2 for a massive improvement on 4G especially on a train going all the way to London.

I didn't do the Data while traveling, but did it in the Stations while stood.  But I did use both phones and not one glitched out.  Youtube, Web and SMS would all work with out issues. No failures at all.

In London however it was a slightly different matter,  on a few occasions I couldn't get the O2 phone to load maps and timed out, Internet was slow on many occasions.  EE however worked with no issues all over.

On the Tube it self. The EE iPhone connected to EE Wifi on the underground which is an extension of Virgin Media.  It connected with out me doing a thing and worked flawlessly and was like lightning in reconnecting.

For O2 I had to choose Virgin Media and then place my details in to connect.  One connected though it again worked with out any issue, it wasn't however as fast at reconnecting as the EE one was. But it did work flawlessly on 5 Tube Trains i went on and at every station too.

Wifi calling on o2 is calling only, as EE Wi-fi calling is both sms and calling which is great for sms use.

The info is just my own findings, some people may be different and there are different phones out there too. The testing is just me walking round (Well stood when testing) and being in ares with public.  I didnt make one test better than the other and Im always fair and honest when I test everytime. The testing isnt to show who is the best, just to give a real everyday life sittuation that people will probally be having especially in London.

Any how the results are as below.  No speed testing was done on the Tube (Its just too manic) 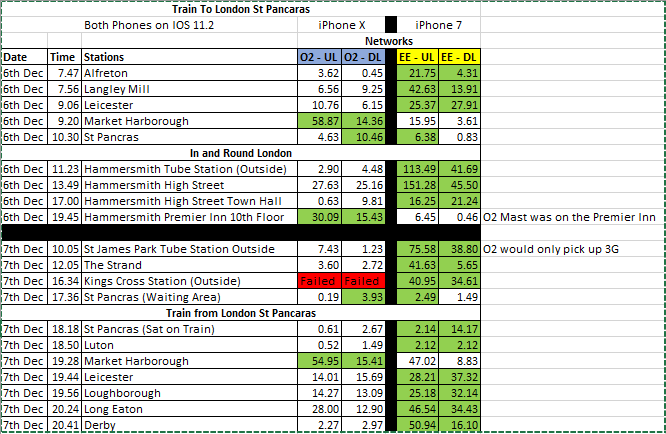 Excellent piece of work @darrengf. Well done on all that research...

That's dedication. Interesting to see the difference. I'm just surprised at the Market Harborough tests. It shows that O2 can do it but your results show just how much work is needed especially in the capital.

Thanks for sharing your findings @darrengf!

Have just come back from a weekend in London myself, but I must have got lucky. To be fair most of my time was spent around Borough/Soho/Whitehall/The City and whilst I wasn't checking speeds I didn't have any issues with general connectivity for social media and maps.

Only place I struggled was Winter Wonderland on Saturday afternoon, but with the sheer volume of people I guess that's to be expected, and even then it was only the Bavarian Village area that was a total blackout, everywhere else I got connected albeit rather slowly.

I wonder whether an O2 Exec lives in Market Harborough?

I work for O2, however any advice or opinion given in this community should be considered my own and not necessarily representative of Telefónica UK Limited.
Report Content
Message 4 of 6 (2,441 Views)
Reply
0 Kudos

Never thought of that. I wonder if the exec does live there lol.

Very interesting @darrengf. We'll make sure this is passed on!