I've always thought of Resolver as a tool for managing a complaint, rather than somethng that will get a more favourable result.

O2 have already told us they will be refunding the disputed charges, so the monetary side of it is dealt with.

It's only my desire to understand 'how' that is being ignored, but I have decided to leave it now, as it was causing me too much stress.

I am disappointed with the way the complaint 'service' has dealt with me, but have put it down to experience, and with only two months left on my contract, I'll be leaving them soon, after many years of being a customer

Thanks for the suggestion, though.

o2 went through all my phone records and even got back office team to check and they agreed they had no idea how the picture message was sent and couldn't even say where I sent it too and agreed to refund the charges,

I even got charge o2 travel as well and was able to prove I used nothing.  Again they refunded the charges.  This was a couple of years ago.

Last year I was in France, Spain and o2 travel charged me correctly for the days I used it.  But I've heard of other people on here with similar issues.

im pretty clued up with roaming and how it works so keep records of things I do.

just to also let you know, I know you mentioned that you said you sent one SMS which was charged correctly,  I know you switched of data which in turn switches of iMessage.  Just out of curiosity the person you sent the message too,  wouldnthis have normally gone via iMessage ?

also go into settings, message.  In there do you have the option turned on that says Send as SMS. ?

do you have a number that it said that you SMS,  I'm more curious that's all as I'm interested in why these things happen to also help so it doesn't happen again.  I may have a theory but it may totally incorrect so don't really want to say just yet just incase lol.

Hi Darren, thanks for your comments.

In our case, we were in the location where the texts were 'sent'.  One was sent from Fiji, and we were there on that day. All the others had a country code of NOR.  This makes sense as they were all sea days when we were connected to the ships cellular network, Telenor Maritime, which is based in Norway.

The person I sent the SMS to also has an iPhone, so normally we send IMessages to each other. However, I know that IMessages only work when both parties are on WiFi or using data.  I was at the hotel in Singapore when I sent the SMS, and wasn't on their wifi network at the time.  From memory, when I sent the message I got the response 'Imessage not sent, try SMS' (or something similar) so I tapped yes to SMS and the message was sent.

I've checked my phone, and currently Imessage is on, and SMS is off.  As far as I'm aware, this is its normal setting, I've never actively switched  on Send as SMS.

I've checked my itemised bill and in the number column it says 'SMS Message Centre' for all the texts that were 'sent'.  It's the same on my husbands bill too, so it's very frustrating not to know where we have apparantly sent all these texts too!

You've got me curious  about your theory. Will you tell me anyway, I just want to know now! LOL

Last year I visited USA and Mexico, and didnt have any problem with charges for services I didnt use. I didnt do anything different this time, so the whole situation is very strange, especially as my husband has had the same issue as well.

Yesterday, I got an email from the CEO's office, saying they will carry out a 'full investigation'. But at this point I'm not getting too excited, as it was a bog standard acknowledgment email.

Thanks for the info @Anonymous

Ok. I may be totally wrong though lol.

Ive noticed that when you send a message that normally goes via iMessage, as soon as you connect to something, iMessage at the back end of the phone try's to set it self up has done for me on odd occasion. Or I've had to switch iMessage off, wait and then switch it on. Or I have to wait for the other person at the other end to send a message via iMessage to reset that persons iMessage back up.

It's Like a handshake to say I'm here and welcome.  I'm not saying that this is the case in yours or that this has caused this.

its just a message I've seen on another network when setting iMessage up,  a SMS is sent saying as per below,. O2 doesn't show this message, but I'm wondering if this is the cause.

It doesn't make sense why all of a sudden it's just happened now and don't happen last year.  It may be even another app doing something as well.

I know when im overseas and o2 don't have o2 travel in county im going to, my data is switched of and I use Tugo only,  I leave phone mostly in flight mode and look for free wifi for tugo to work and iMessage.

Please bare in mind it's only a theory and I could be completely wrong.  I would have also expect this to be showing up more. The activation SMS  only normally happens when setting iMessage up once, so my theory could be incorrect.  Just would like to know what o2 does find.

Do please let us know if you do find anything out.  It's always good to help other customer questions out.

Try not to get upset or stressed.  At least o2 have agreed to refund you and there are some amazing people on here always wanting to help and support the o2 family.

if you are wanting help or advice, please let us know, but don't get too upset. 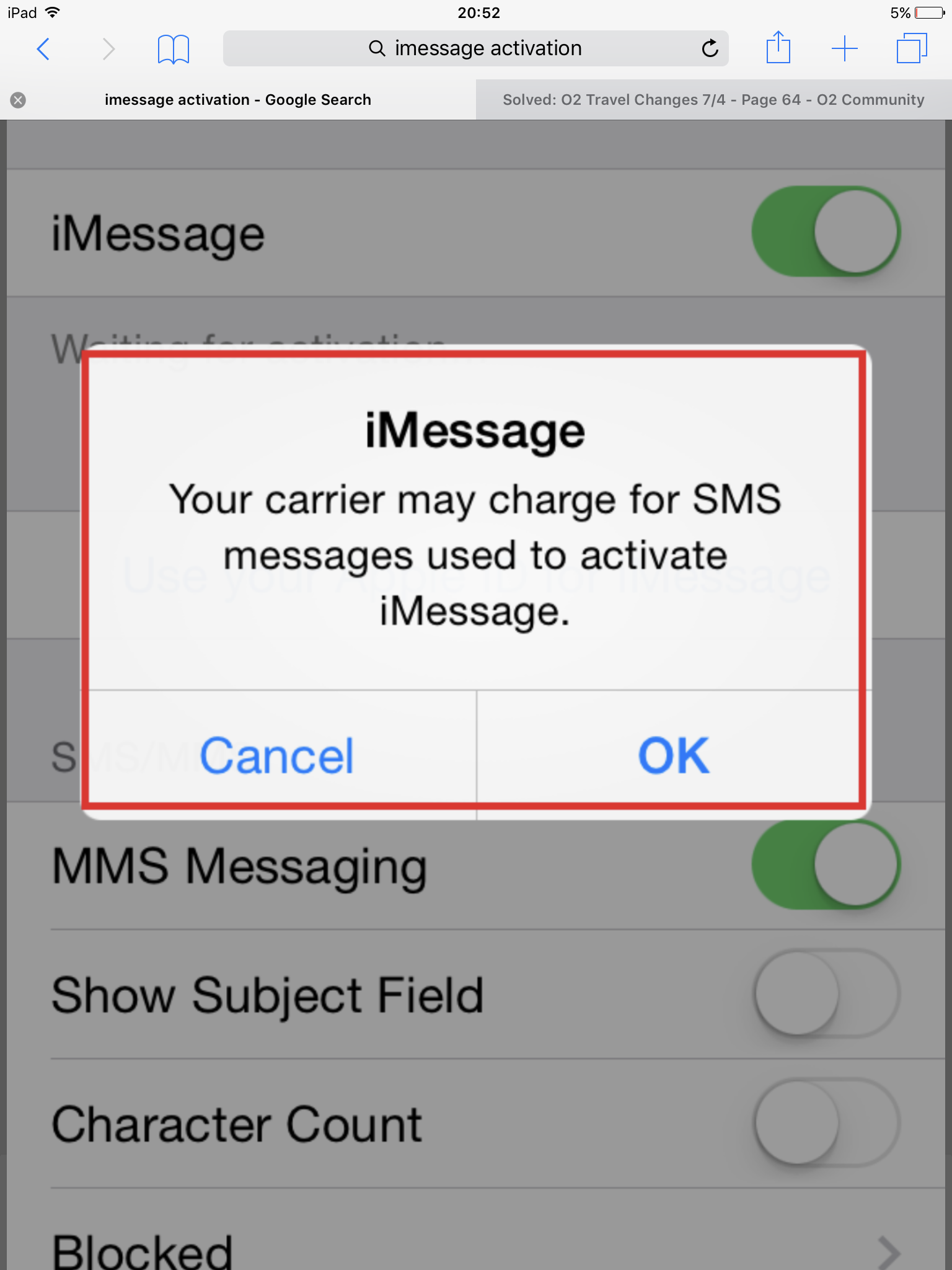 i think your theory could be on the right track, as I did have an issue regarding iMessages.

One day I noticed a red dot on the message app, so I opened it up and there was a message saying that iMessging was turned off.  So I waited until the next time we bought a ship's wifi package and tried to turn iMessagimg back on.  It asked me for my password which I entered, but as it was satellite wifi, it's not totally reliable and it timed out. I'm not 100% sure, what date this was but my first text charge of 40p was on 20th February, and it would certainly have been around that time that this iMessage thing happened.

Anyway, the next day we were in Perth, and we had a really fast internet connection at the restaurant we had lunch, so I turned on IMessaaging and was successful. (No charges on my statement for this day)

A few days later I picked up my phone again and it told me iMessging was off again, and was asking for my password. I dismissed the message, as I was fed up with messing around with it and would sort it out when I got home.  Again not 100% sure, but I got a £4.99 charge around that time ( it was a port day in Australia.  After that, every so often I got a message on the phone asking for me to input my password, which I  dismissed.  I can't tie up all the dates, but maybe IMessagimg was asking to be switched on again, causing these charges?

about half way the holiday, my husband said his phone suddenly kept asking for his password, and sure enough, his charges start half way through the holiday.  So maybe his IMessages had switched themselves off to.

it does seem plausible, so maybe you have indeed solved the mystery.

I didn't have this IMessaging issue on my other cruise,  and had no mystery charges last time, so another reason to suggest your theory is on the right lines.

It sets my mind at rest that there's a rational explanation, as I hate it when I don't understand what's happened!

Thank you very much for taking the time to help me, much appreciated. I will update if I get any response from O2.

i'm not feeling stressed about it now, but it maybe because I had a couple of glasses of wine at lunch time!

Thanks @MI5 and you more than welcome @Anonymous

please do let us know, or at least what o2 come up with.  But from what you have said makes my theory now more plauseable.

A few few glasses of wine always helps though lol 😜

reading your post Darren it does sound like this - I'm sure that I saw something about imessaging and confirming connections.
Now using the LG V30.

This has happened to me several times when I have been on holiday with family in the USA and I have only been using their home wifi.

The explanations of why it has happened when my mobile data has been turned off vary from "the phone will turn on the data automatically if the signal drops" to "it will run in the background and can pick up the data usage unless you remove your sim card"!!!

Both of these explanations are beyond belief and suggesting that I remove my micro sim card which could easily get lost is ludicrous.

I also have been unable to get a proper explanation to my complaints to O2, you are certainly not alone!

If only using WiFi, just put phone into airplane mode.
I have no affiliation whatsoever with O2 or any subsidiary companies. Comments posted are entirely of my own opinion. This is not Customer Service so we are unable to help with account specific issues.