@jonsie @Cleoriff If I tell you. Promise you won’t tell any one else.  Although it’s been on twitter and sort of gone under radar 🧐

Waiting for a true confirmation however from o2 on here.

But this now stands at the following 4G roaming if correct.  So please don’t quote me on any of this until it’s been fully verified.

the ones in bold we know there is 4G roaming already.

But out side EU countries well they may allow you to connect to a 4G network but at what speeds I’m not sure.  I know it’s already been mentioned about connection to US 4G network at 0.50mbps Up and down.  Which is better that the restriction of 0.10 or less up and down people used to say.

only time will tell.

@darrengf  As if I would.... my lips are also sealed

So.... let me just get this right. You are saying 4G is available (probably) in these countries?

I wont say one word and will keep it very quiet....Not sure how long I can be trusted with the secret though

Not exactly shouting it from the rooftops, are they, @darrengf? 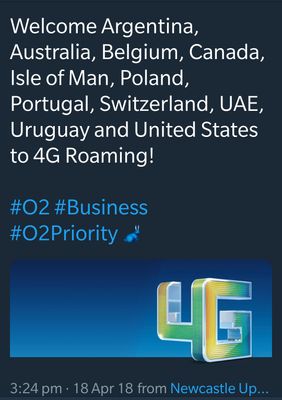 Not exactly shouting it from the rooftops, are they, @darrengf?

Although there are only 11 countries shown in that  and 15 new ones shown by @darrengf (taking out the ones we knew about i.e. Australia, Czech Republic, Germany, Isle of Man and Spain)

Dribs and drabs, @Cleoriff, from a Gateshead company that still promotes TuGo on their website... 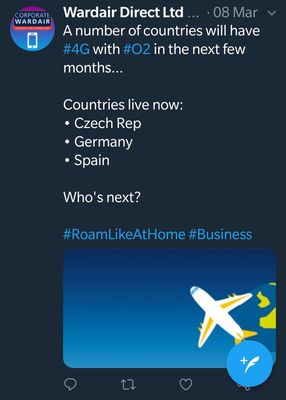 Dribs and drabs, @Cleoriff, from a Gateshead company that still promotes TuGo on their website...

Thanks for that clarification @pgn

I can confirm France but only in the larger metropolitan cities.
I have no affiliation whatsoever with O2 or any subsidiary companies. Comments posted are entirely of my own opinion. This is not Customer Service so we are unable to help with account specific issues.

Yes it’s a bit strange why there not really announcing it better.  On twitter it self there are a few that has said new 4G roaming countries and not all were mentioned.

It’s so difficult to try and get the correct information at present and it’s possible that there may be more countries that haven’t even broken through yet in the media.

like I said that even I’m still waiting of the verification. But the info is from the public domain. Just it’s all over the place.

it may be that o2 are going to do a big announcement all at once.  I just don’t know.

O2 4G roaming abroad like I’ve said outside EU does allow you to connect to the new network band, but just not at the 4G speeds you may think well it’s pointless in connecting to the 4G network then, however it’s really important to have these 4G agreements more now than ever.

in the USA AT&T switched of there 2G network last year leaving o2 customers only able to roam on 3G. That’s ok, but 4G on in the USA is becoming more widespread and offers much better support for larger volumes.  So o2 only having a 3G agreement in USA may happen the customer in roaming and this could lead to not so good image.

Vodafone Europe has announced that it will not switch of GSM networks until 2025 at the Earliest.

Vodafone Australia switched there 2G network or in 2016

All of Japan’s mobile operators abandoned 2G services by April 2012, making it the first country to fully jump to 3G and 4G-only networks.

AT&T has already switched threw off and rivals including Verizon and T-Mobile have unveiled plans to do the same.

Sunrise plans to switch of by the end of 2018

Swisscom and T-Mobile Netherlands have scheduled shut downs by the end of 2020.

So as you can see having 4G agreements now more than ever allows o2 to still of roaming agreements to its customer base.  Offering just 3G isn’t always an option due to poor 3G coverage in areas. Just look at the U.K. at one time.

Look at when EE create new Masts in areas now, they crest with 2G and 4G only.

before I’m asked, 2G will be here for a while in the U.K.  it’s the backbone to the U.K. networks and offers very strong and reliable signal for calls and sms.  It’s very resilient and lots of business like smart meters, car readers etc use only 2G. It doesn’t need anything else other than that to send a a few bits of info back.

So for 2G it’s not going any where fast at moment.