I've been doing research on this issue and have just come away from speaking to Apple - who have definitively told me that this is a carrier issue.

Pre-ios update on my iphone 5, I was able to toggle 3G off when I was at work. I did this because 3G hasn't worked where my office is for well over a year now, and despite contacting o2 several times - they were adamant it wasn't an issue at their end. This is my second iphone 5 with this problem, plus several other employees on o2 have also encountered it, so I can only assertain that the issue isn't at my end.

As a way around this problem, ensuring I can get data access on my phone for emails/imessages etc. I've been turning off 3G. This was, until the iOS8 update.

So at the moment, I have no data access whilst I'm at work - because I have two options for cellular data. One is to enable 4G, which I can't do on an iphone 5 because it's not supported. The second is to turn off cellular data altogether - which, defeats the object.

I'd like o2 to either a) investigate the 3G problem further in my area at work, or b) issue a carrier update which reinstates the option to turn off 3G. Is one of these possible, please?

I've been with o2 now for 14 years (back when it started our as BT Genie), and I don't particularly want to leave - but this is not an acceptable situation for me.

Any help is appreciated, thank you.

This is a speedtest I ran on my phone back in June (when I was finally able to get it to load, instead of it giving me 'network communication issues' like i'm getting today), which I sent to o2 as evidence. Added for reference. 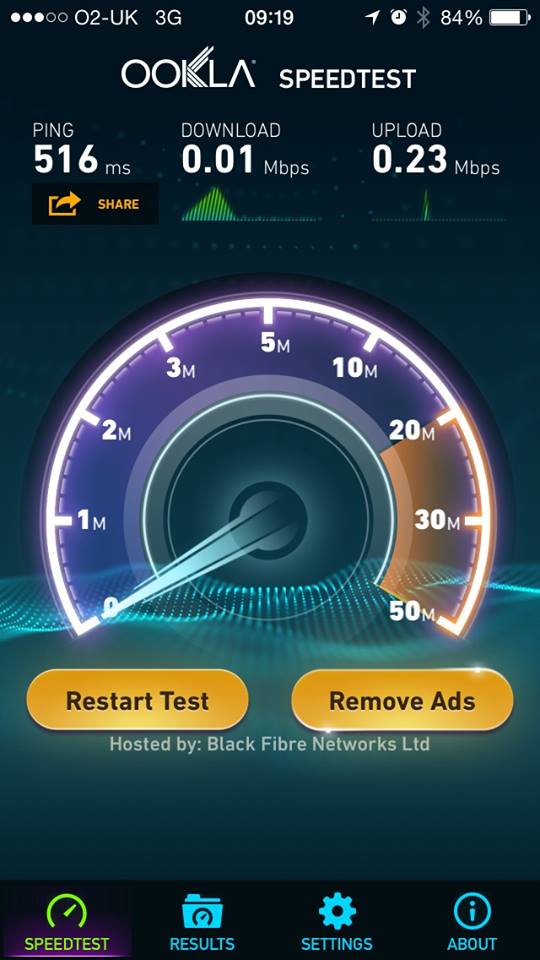 Similar to my question of wanting to be able to turn off 4g and 3G via a toggle in my iPhone 5s.

When I upgraded to 4G the 3G toggle was removed via a carrier update as you describe.

I have spoken to Apple and they have confirmed it is O2 and them that collaborate to add / take away features.

This I've passed onto O2 site staff here and that's where it's stayed.

It was the same for Android users but the 3G toggle has been re introduced for some of them.

You can download the MYNETWORK and report any masts.

Thanks for your reply - I downloaded the MYNETWORK app, and all the tests failed saying it wasn't suitable for email/videos etc.

When I went to submit the error, it can't, because my 3G doesn't work. Lovely irony

Can you submit the results whilst on Wifi ?

From the app "4) How can I tell you about something if I don't have a signal?
Your phone will store your feedback, then send it to us once you've got coverage again. You can also use this app over a Wifi connection."

Those speed tests by the way as abysmal.

You could levy a complaint here http://www.o2.co.uk/how-to-complain/complain too to highlight the issues your having. They may offer a Goodwill Gesture even tho they do cover themselves in their T&amp;C that the service is not fault free or available everywhere.

We've even heard they will quash a contract under some circumstances but have been known to ask for the handset back.
Report Content
Message 5 of 18 (5,106 Views)
0 Kudos
Anonymous

Like you I have the same problem after downloading IOS 8

Looking at the O2 shop online - it states that 'all iphones come now with 3G as standard'  - fully supporting Apple saying that it is a carrier issue.

The option of turning 4G on/off istead of 3G is useless to me aswell as 4G is not available in my area.

Re: Data whilst at work - Is there any possibility of you accessing WIFI? as this will address that issue.

Typical of Nationwide 3G issues at the moment but O2 just don't seem to get it - Then they compound the issue by removing the 3G toggle - Priceless !!!!
I have no affiliation whatsoever with O2 or any subsidiary companies. Comments posted are entirely of my own opinion. This is not Customer Service so we are unable to help with account specific issues.

I have an iPhone 5 and I only turn 3G on when I don't have access to WiFi.

I hope this can be resolved in an update asap!!

Luckily with my new Sim only contract I get 5GB data but that could easily get eaten up I fear...

Only through O2 talking to Apple will this happen via a carrier update.

I have an iPhone 5 and I only turn 3G on when I don't have access to WiFi.

I hope this can be resolved in an update asap!!

Luckily with my new Sim only contract I get 5GB data but that could easily get eaten up I fear...

This change won't stop you from turning data on and off - It is the choice of 4g, 3g or 2g you don't have so it won't be relevant to the example you have given.